It is with great pleasure, and extreme excitement that I am back again to spotlight yet another fantastic Toy Artist who has found their way into my plastic, slime-filled heart. This is the second part of what was originally a trilogy, but has since become a quartet of super special Spotlight Features here on Hoard World.

If you missed out and want to read the first spotlight in this series that started way back in September, and focused on the awesome Goodleg Toys, you can do so right HERE. 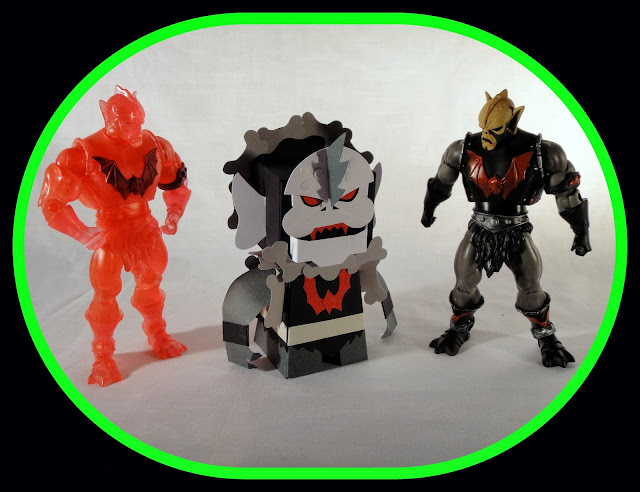 This installment, we focus on reknowned UK Paper Toy Artist Ryan Hall. He creates handmade 3-D Paper Toy Art. It's quite exceptional stuff. You can find out about some of his other work at his word press site and follow him on his Facey B to see what he's currently working on! You won't be disappointed.

Since I've known Ryan, he has had a variety of exhibitions of his work, both in the UK and internationally. Within the last six months, he even had a Linda Carter approved Wonder Woman piece displayed at the Art Boy Gallery in Melbourne.

Personally, I was incredibly grateful and honoured when these Hordak and He-man pieces arrived on Hoard World many, many moons ago. If I had any self-respect, I would have written this tribute quite a while back. Alas, time waits for no Hoardax.

Here's some words from the artist himself about his He-man and Hordak pieces as well as a bit about his own origin story and influences. 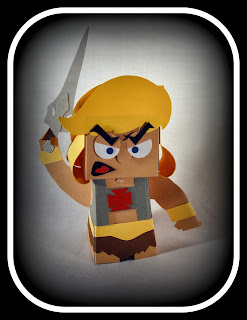 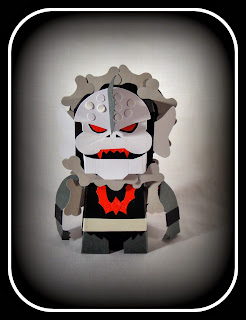 Ryan Hall: "The He-man pieces were for a little exhibition I had in a London comic book store called Orbital Comics, a few years back. When I was making them I put a limit on what characters I was going to do i.e. just my favourites. However, as I progressed, I went a little overboard and pretty much created the entire MOTU on paper! As each one I did looked so good, I just wanted to make another one, and then another one, to see what the next piece would look like!

When I was a kid, toys and action figures were my life. This pretty much hasn’t changed, but I think the whole sense of play with a plastic figure just carries on into your art, as I was very creative as a kid. I just didn’t see a cardboard box and packaging, I saw Castle Greyskull or Star Wars space ships, and from that would just make my own play sets and vehicles for my toys.

When I was studying my illustration degree at university, that’s when it really started me off doing my paper sculpt work. I took my love of toys and action figures, and applied that to some of the work briefs we had. I took a more 3D route with them and just created something that you could actually see and interact with; from doing an 8ft Optimus Prime out of card board boxes to a doll dressed as Kylie Minogue for photos.

Then, I just enjoyed taking this flat piece of card and transforming it into a toy. With such a simple medium you get amazing pieces of toy art, and from there it developed into something I really wanted to carry on doing. My influences include Marshal Alexander, Matt Hawkins, Kiel Johnson, Sucklord and Amanda Visell. I think her work is just amazing and awe-inspiringly brilliant, the way in which her illustrations work, from 2D to 3D models."

Ryan Hall: "The Wonder Woman piece that I completed for the Artboy Gallery in Australia is now one of my favourites, even more so since the very wonderful Lynda Carter has seen it! I grew up watching her on TV, so I really wanted it to convey the fun of the TV show and what I personally loved about it."

Here's the photographic evidence for both of those mean feats of Wonder Woman Fandom Achievement!

Now back to Masters Of The Universe for a moment. I know! How strange for Hoard World to do that.... 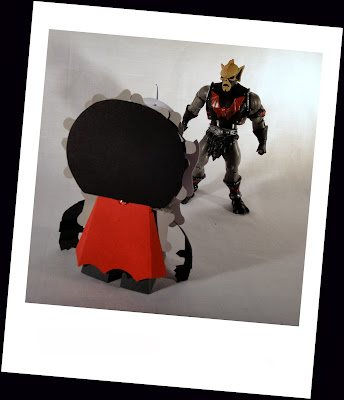 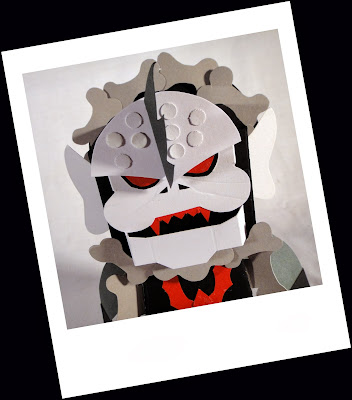 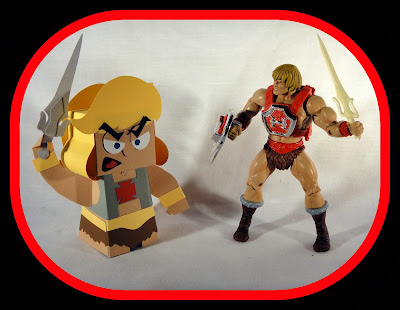 You might have noticed already that I think Ryan's 3-D Paper Toy Art is sheer brilliance. And these examples are no different. They look amazing in real life.

What I particularly love about them, apart from their overall style is their "packaging" or frame that he often includes with his characters. Using the Lynda Carter-approved Wonder Woman as an example, her "packaging" is her American Flag and her black frame.

With Ryan's Masters Of The Universe, we go somewhere entirely different and absolutely awesome, yet also traditional. 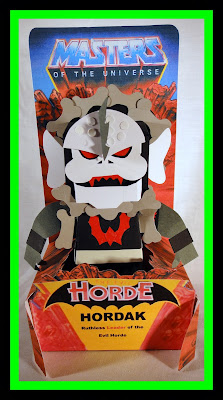 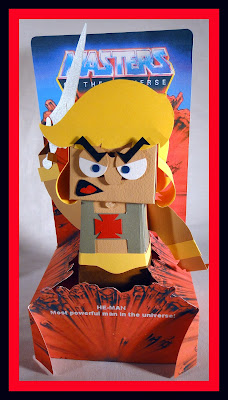 I can not tell you how much these pieces rock, but I'm guessing that if you've been paying attention so far, you can plainly see. If you're ever in my neighbourhood, drop in and I'll show them to you. In the mean time, you'll sadly have to make do with pictures like this..... 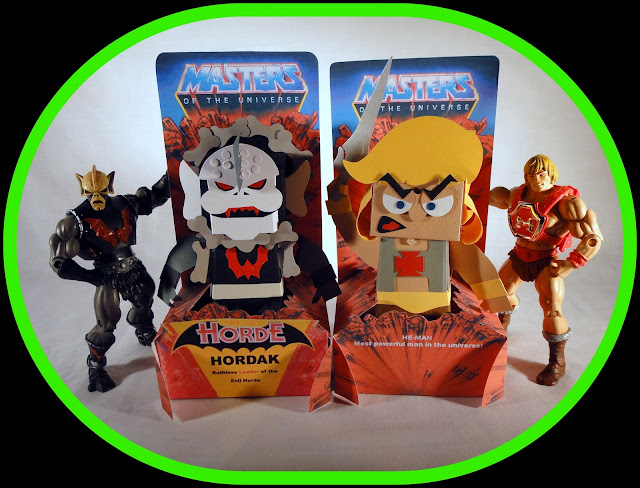 .......and keep an eye out for Ryan's next gallery exhibition! 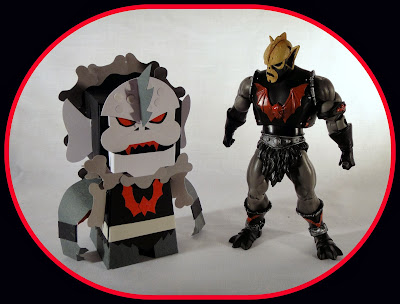