SPOTLIGHT ON: EARTHWORM JIM BY MEZCO 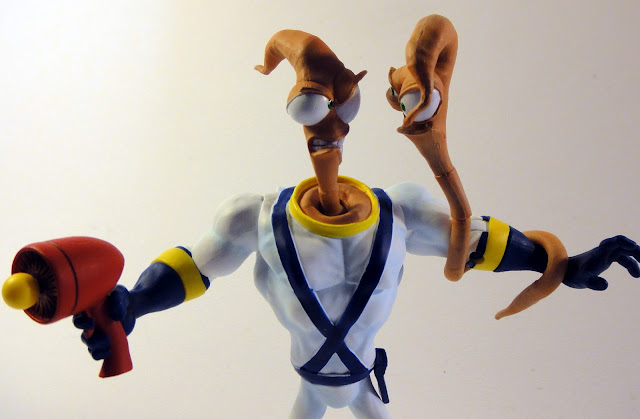 
The story of your everyday, run-of-the-mill worm-next-door imbued with special powers (like a robotic human body) thanks to a space suit that fell out of the sky has been around for a while now - just under twenty earth years.

Easily one of the most recognisable and popular video game creations of its time - Earthworm Jim spun off into an animated series (voiced by The Simpsons' Dan Castellaneta!), a toyline and even comic books.

The main reason that Earthworm Jim has stuck around so long is because he's unique. Jim and the characters in his universe are just a lot of fun. Once you've been exposed, you can't really forget about a space-adventuring Earthworm superhero.

Personally, I had a lot of time for all of Earthworm Jim's incarnations but one of my biggest regrets back in the day was that I'd only coveted Playmates' Earthworm Jim figures at shops and never been fortunate enough to own one. It was yet another case of Collector's Regret Syndrome. It haunted me throughout the years. I often thought about how I'd never got an Earthworm Jim figure(s).

So as you could probably imagine, I was ecstatic when MEZCO announced a brand new Earthworm Jim figure was coming out July 2012.

And here it is folks in glorious Hoard-O-Vision!! 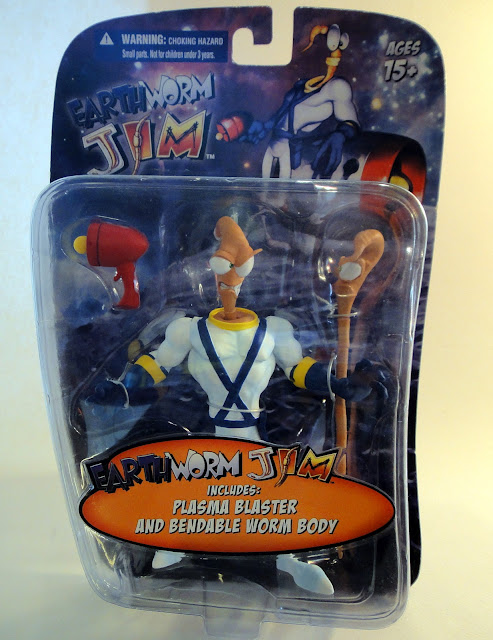 This is the first time that we've done a "review" on Hoard World so before I begin I should probably tell you upfront that you're not going to get the sort of detailed analysis (or even a point scoring system) that the excellent, long-running Michael Crawford's Toy Review has made his own. There'd be no point. He already does such an amazing job - why try to do better when you can just be different?

First off, this figure is awesome. As soon as he arrived I knew he was going to remain mint-on-card for about a nanosecond (after Skorpia took a bunch of photos of course). I couldn't wait to open him up. I was so excited I forgot to even huff the figure for that whiff of New Toy Smell.

As you can see, the packaging has departed from the style of the 90s figures - and I'm fine with that. Not everything has to be reminiscent all the time. Although, if you're reading this Mr. He-man Sir, I would have loved it if MOTUC had been carded like the old red Masters cards but I'll live. 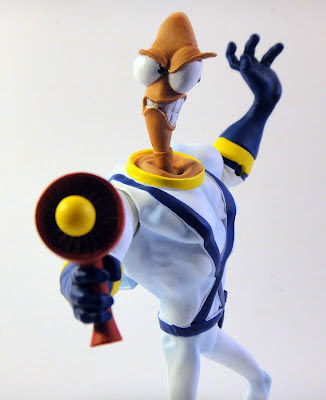 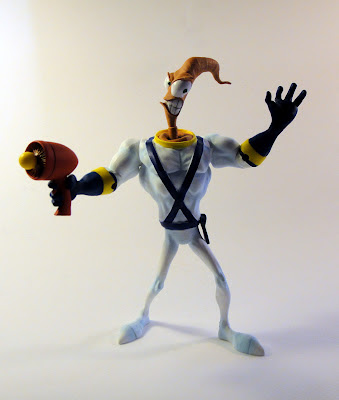 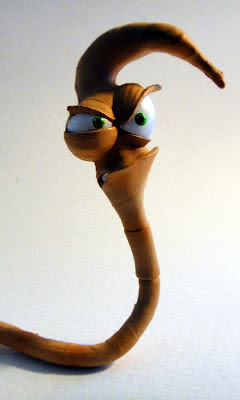 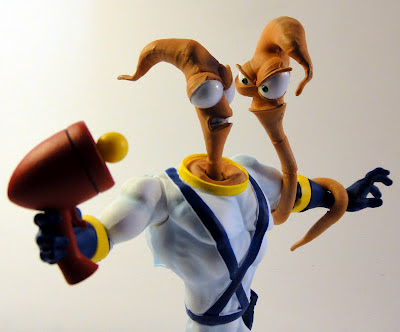 I'm not sure if the photos do it justice but this figure looks absolutely fantastic. You can't get him into THAT many different poses and he's going to always be looking off in another direction but you won't care. The addition of the bendable regular Earthworm Jim head is inspired. He's really bendy. As you can tell by the pics, he can also be a bit of a nuisance. Earthworm Jim almost walked off the set when the next photo happened. 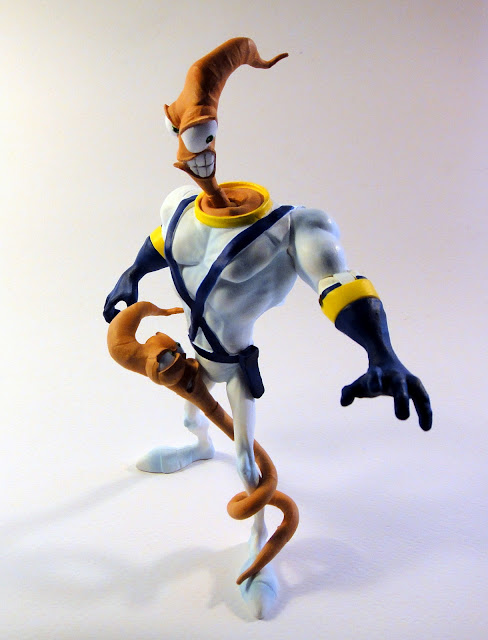 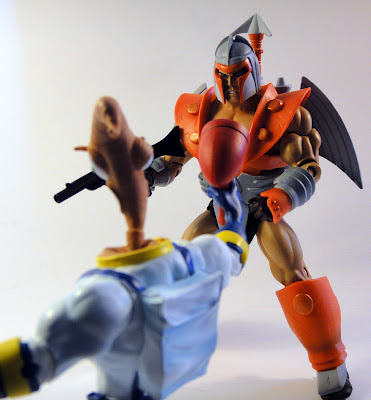 While we were shooting the photos for this review, we had an unexpected visitor. Jim was annoyed, to say the least. You could cut the tension in the air with a laser gun. Unfortunately, there were two of them on hand. If I had better special effects facilities, there might have been a shoot-out.

Space Ace Vykron was all, "O hai Hoardax. I can haz photoshoot?"

And Jim was all, "You said this was a closed shoot. What the heck is he doing here? This is my time to shine. Get this CONCEPT FIGURE out of here. I'm the real deal. I got released and loved by generations. Who's he? A loving throwback to an idea that never got made?"

I calmed Jim down and asked Space Ace Vykron to leave because, well, frankly I needed some more pics, and afterwards I wanted Earthworm Jim to stay on my shelf. I placated Vykron with the promise that he'd get his own shoot VERY soon (stay tuned for that).

But before Vykron left we got one good shot of them together. 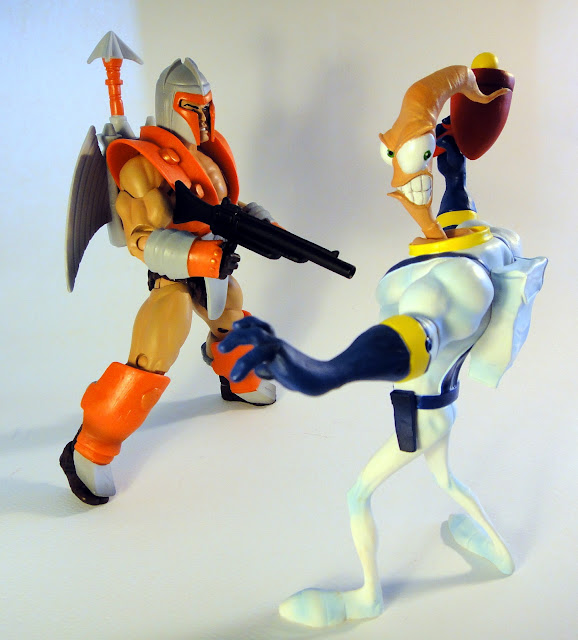 If Palisades had ever been able to actually release that Sesame Street line of figures you BETTER BELIEVE that this Hoard World's special guest star would have been Oscar The Grouch instead of Vykron (Can't you just see Jim The Worm and Oscar hanging out?)

Overall, Mezco's Earthworm Jim is a great figure. It really captures the spirit of the character and if you have any nostalgic fondness for Jim at all, you'll want to own this. There's still a few floating around on The Ebays - mostly U.S./International sellers. There's also an SDCC Metallic variant and some that have been signed by Doug TenNapel himself, if you've got the spare change and like to own things that have been signed by hate mongers.

A few of the photos from this Hoard Review plus a bunch of alternate pics that didn't get used have retired to the Hoard Board over on Pinterest if anybody's (p)interested.

EDIT: This was Hoard World's very first spotlight. At the time it was originally written, I had absolutely no idea that Earthworm Jim creator Doug Tenappel was a sexist and a homophobe. I was a little late to the party on that bit of info it seems. I only found out in June of 2013! I was very saddened to hear about this and became conflicted because I still like this figure. I made the editorial decision to leave this spotlight up online but with a few edits (which you can pick out pretty easily) about Doug Tennapel himself. These additions to the text have been added in italics for your reading pleasure....or displeasure as the case may be.
Posted by Hoard World at 16:47