In 1987, one of Cannon Film's finest filmic moments was Masters Of The Universe starring Dolph Lundgren and Frank Langella. I saw it at the cinema as a child-like Hoardax. It blew my eight year old mind right in half. Cleaved in two like the power swords of the original MOTU storyline.

It was all a great lesson while I was young and impressionable that if you're a big enough fan of something you will adapt to various interpretations and find something to like in all of them. Sure, you don't have to, but it's entirely possible.

The original Masters Of The Universe motion picture is not why we're here today.

We're here to talk about the inevitable new film.

The highly anticipated and possibly-never-actually-happening modern interpretation of the 30ish year old Mattel kids toy line. Hasbro have had massive amounts of success with their licenses regardless of quality. Sci-fi / Fantasy / Superhero movies are the toast of the town right now. 80s nostalgia is peaking. Verily, we are living in a golden age that can only truly peak with a Masters Of The Universe live action film.

Personally, I think it could work better as an ongoing, dark, tongue-in-cheek Fantasy/Sci-Fi show with a macabre sense of humour that doesn't shy away from the existence of characters like SNOUT SPOUT. Maybe even on a US cable network. But that'll probably never happen.

So instead, let's CAST the future blockbuster attempt to create a new film franchise based on literally one of the weirdest and oft-maligned concepts in toy (and probably sci-fi/fantasy history).

This is my casting for the Masters Of The Universe film. The first film. If the powers that be ever read this and heed my words, there will be sequels. Verily.


Note: The following feature isn't just a sneak peak into the future, it's also a journey across some of my favourite toy sites. Almost every toy pic used in the casting is from another site with an included link to them. So, if you disagree with me, you can always click a link and go to another site!

If any of the following photographs have been credited incorrectly, and you are the original photographer or content creator, notify me and I will update the picture source. Alternatively, if you have an issue with me using any of these pics, I will take them down immediately upon request.

Live with it. Deal with it. It's going to be fine. We want this movie to make money. Both G.I. Joe movies were six degrees of rubbish in their own special way (I love them BOTH for the record) but the second film definitely suffered from a lack of Tatum. It pains me to say this, but I'm right. If history has proven anything, it's that it doesn't matter WHO plays He-man. Just so long as SKELETOR IS AWESOME. 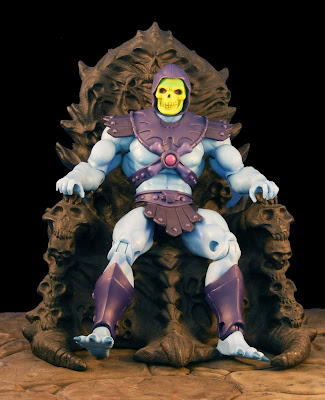 We know he can act. Look at his face. He looks like Skeletor to me. His voice is perfect. He can act with his eyes. We know he can bulk up if need be. If they go down the Keldor Origin route, Sheen can play him with his mustache tied behind his back.

This is literally the best casting an unpaid non-professional has ever come up with. For anything ever.

But who's gonna play Teela?

Relax. She'll be fine. We want people to go see the movie. Since I'm constantly casting the He-man movie in my brain meats at all times, I can actually remember the exact moment during Hunger Games: Catching Fire that I realised she was Teela. And I'm right. She's actually perfect.

Take a look at her. A good look at her. She's perfect. She can act. She's great. There's not a moment of watching the television program Masters Of Sex that I don't think, this is totally Skeletor and Evil-lyn doing experiments. They already have a great chemistry. Don't judge me.

I bet he could grow a nice mustache for this. Hey, look, here's a photo of him with a mustache when he wasn't even trying to be Man-At-Arms! He has a warm presence onscreen when he wants to and he can play comedy with Orko if he has to. There's nobody better.

Tom Kenny is the voice of Orko.

There ya go. Sorted. What do you want from me? There's forces more powerful than I that don't even want Orko in this movie. But I'm happy to keep him even though I don't love him the best. He's obviously going to be made entirely out of CGI. And that's fine. Because Spongebob is going to do a great job voice-acting him.


Alan Oppenheimer reprises his role as the voice of Battlecat.

This is a no-brainer. Battle Cat (or Cringer) is absolutely going to be CGI-palooza. Let's voice him properly. I don't buy into any of this "Battle Cat can't talk" malarky. He can. He will. And Alan Oppenheimer is the prolific voice actor to do it. (Alan Oppenheimer is seen here at Powercon 2013 with Lobos Collectables own infamous He-Fan Alicia.)

C'mon! Is there anybody better for this? Ron Perlman maybe. MAYBE.
Just be Beastman, will ya Liev? Make like a Nike and Just Do It.

Will Sasso is Ram Man.

I'm sure these are both controversial. I actually didn't think of Brett Gelman, but once Hoard Worlder Ben pointed him out, I had no choice. Brett'd have to wear a WIG, and I'm sure that'd be HELL for him, but he'd also have to have a CGI-FIST and muscles so that's not a dealbreaker. What is important is his face shape and perfect beard. I'm convinced that Will Sasso can do anything. I also think Brendan Gleeson is too old for Ram Man.

People will be tempted to cast the entire Masters Of The Universe film with professional wrestlers or UFC fighters but the reality is, we need more than just muscle-worship or brutal-looking "He-men." We need actors. We also want some non-CGI musclebound behemoths. I can't think of anybody better than these two for these roles. I did consider CGI-muscles Andy Samberg as Trap Jaw (due to his massive gob) and Walt Goggins as Tri-Klops (just because he's amazing and can play literally anything) but in the end I opted for real bulk. It'll be fun to see these two as Evil Warriors; who I always think of as pals, for some reason.

Lucy Lawless is The Sorceress.

To me, a talented actor/comedian like Hader is an easy choice. This guy can do anything and this role demands some range. I have no idea what sort of special effects would be required to make this character work but if you put Bill Hader behind it? It'll work. Besides, it's about time he took a more serious role. Ahem.

Lucy Lawless, on the other hand, has been mentioned before on numerous occasions for this role, but it's still one I struggled with. In the end, I decided there is nobody better to play her. I can see it. You can see it. You'll believe a Zoar can fly.

We know Kurt does good beard. Randor needs to be immediately likeable because the movie will be too busy with other stuff to give him too much screen time. Meanwhile, Patricia Clarkson is a superb actor. I would totally believe she's an ex-astronaut. Look, I even found a picture of Kurt and Patricia that mirrors Randor and Marlena! What more do you need to know? It's brilliant.

These may be the most controversial castings of all. But seriously, they are both some of the finest actor/comedians the world has ever seen. If you've never seen the BBC television show Snuff Box, you really need to get on it.

All Matt Berry needs to have is a nice grey side beard and a jet pack, yo. This could be the Brian Blessed Voltan role from Flash Gordon the movie for the new Millennium!

And that's how you cast the upcoming Masters Of The Universe live action feature. If you have a good script and this cast, it doesn't matter if you get McG to direct it - it'll be the best film of all time.

The key to Masters is to embrace it. Don't shy away from the ridiculousness of it all, make it humourous but play it deadly seriously. And make it fun. But make the villains evil as all get out. Make them scary. Trap Jaw is theoretically an absolutely terrifying character. Make it work.

I recognise we're missing a bunch of characters but this is about as many as you can realistically have in one film without crowding it. It might already be too many as it is. You can't get too convoluted too quickly with something like Masters because it's already so outrageous. You have to save Mekaneck, Sy-Clone, Clawful, Whiplash, Buzz-Off, Faker, Zodac, Hordak, She-Ra etc for sequels. And you don't kill ANYBODY. Don't make that rookie mistake with characters. Unless you plan on bringing them back as part of the plot. Or unless you're Saurod.

And that's how you do a good one.

Share this. Tell your friends. The more people that see this, the more we might spark an idea in the minds of movie executives that a Masters Of The Universe live action film is a lot more viable than anybody gives it credit for.

EDIT: It has been suggested to me that Dolph Lundgren needs a role and/or cameo. I love Dolph more than most things so I admit this has been an oversight on my part. He can play King Grayskull in a flashback scene, or some such.

EDIT EDIT: It has also been suggested to me that actor Kellan Lutz would make a great He-man, and after watching this video of Agent Hashtag, I have to agree with that. Okay. There will be no further edits.
Posted by Hoard World at 12:06