It's a great pleasure to be back again to spotlight more fantastic Toy Artists from around the globe.

This is the final installment of what has been a quartet of specifically focused Hoard World Spotlight Features.

The previous spotlights (in case you missed them) were: 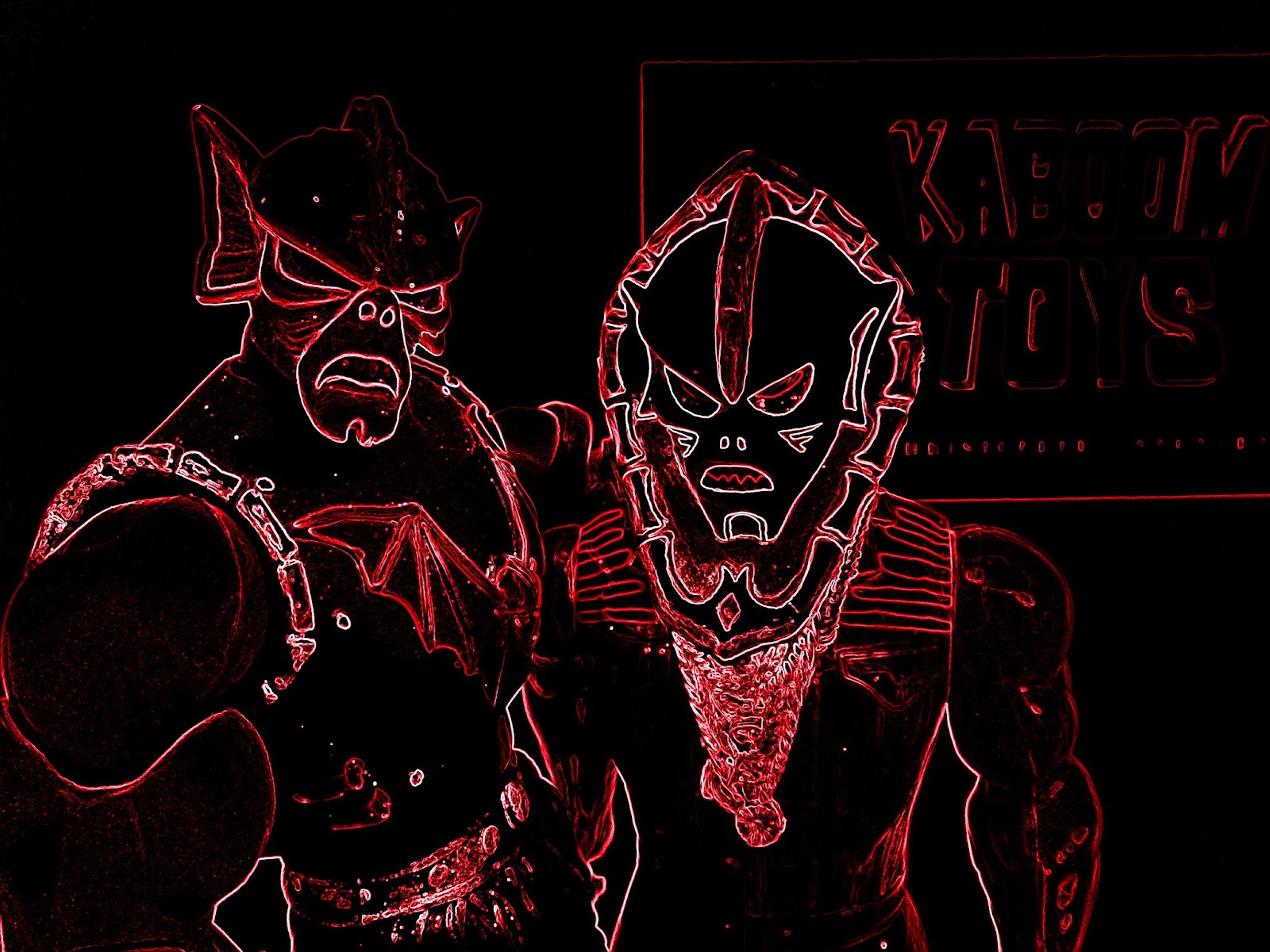 This time around we look at an independent outfit called KABOOM TOYS, created and operated by artist Chris Cannon.

For this spotlight, Chris was not only generous enough to give me a lengthy interview about his awesome work but has also offered up an EXCLUSIVE DISCOUNT at his Kaboom Toys store especially for Hoard Worlders (and anybody else who reads this in time)!

Just head over to Kaboom Toys, and when you buy something, enter HOARD666 as the discount code in the check-out to receive a FURTHER 20% off!!! (Offer expires 16th March 2014) 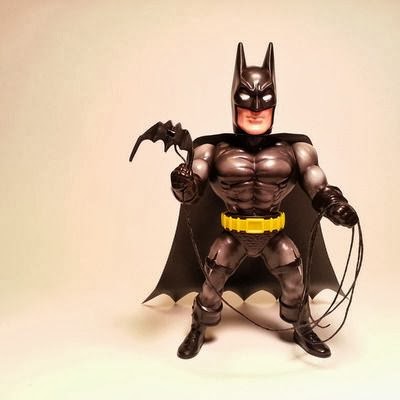 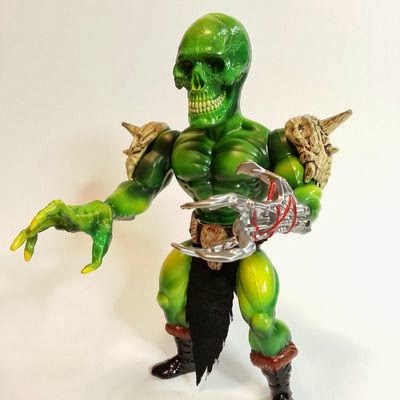 There's stuff like these guys in there, just waiting for you to buy them for yourself or somebody you are fond of. If I were you, I'd stop reading this article right now and just clean out your bank account. Who doesn't love a nice big toy sale?

Especially since many of them are one-off, unique pieces. Just like my man, E.A. Hordacus. 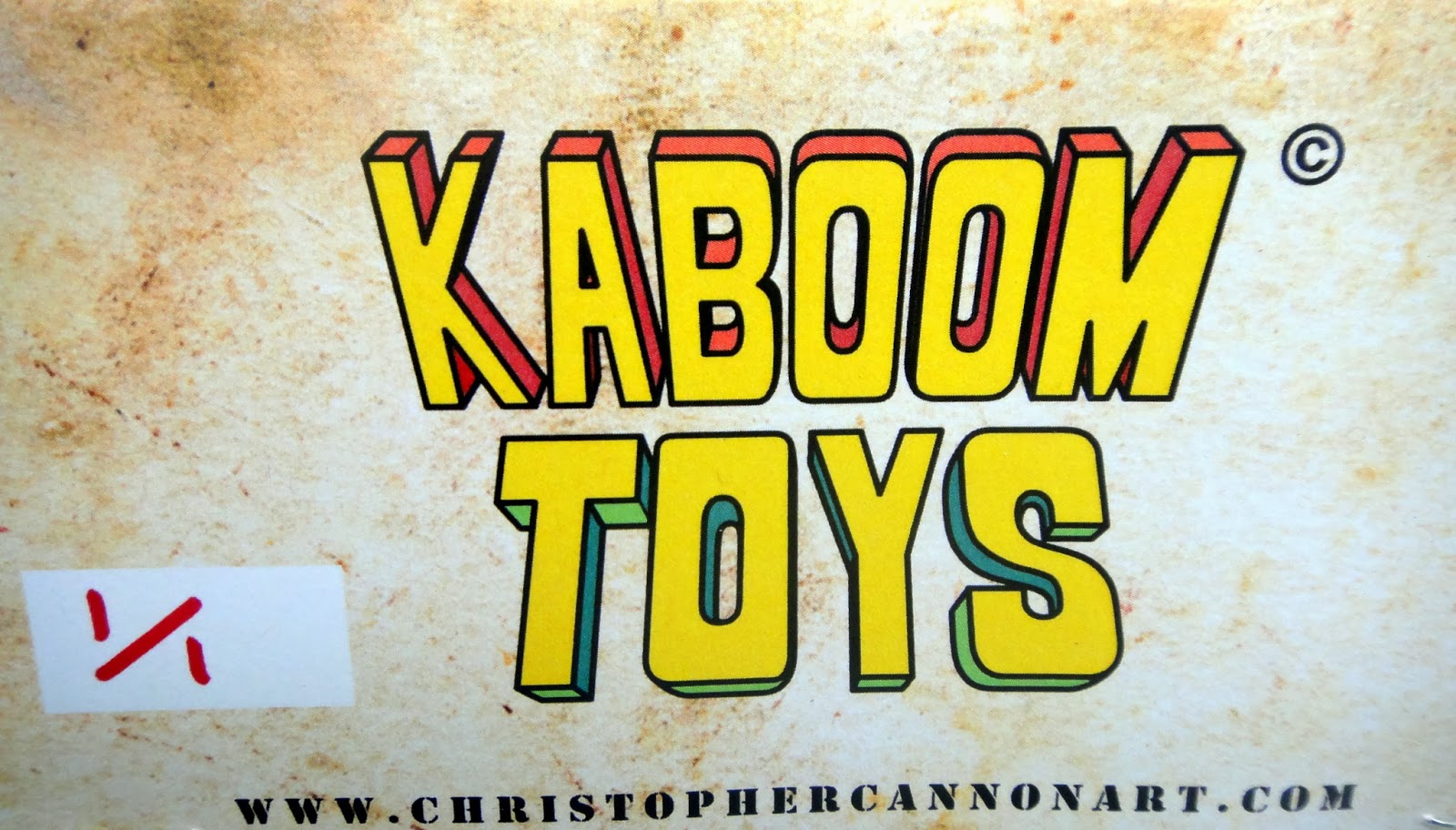 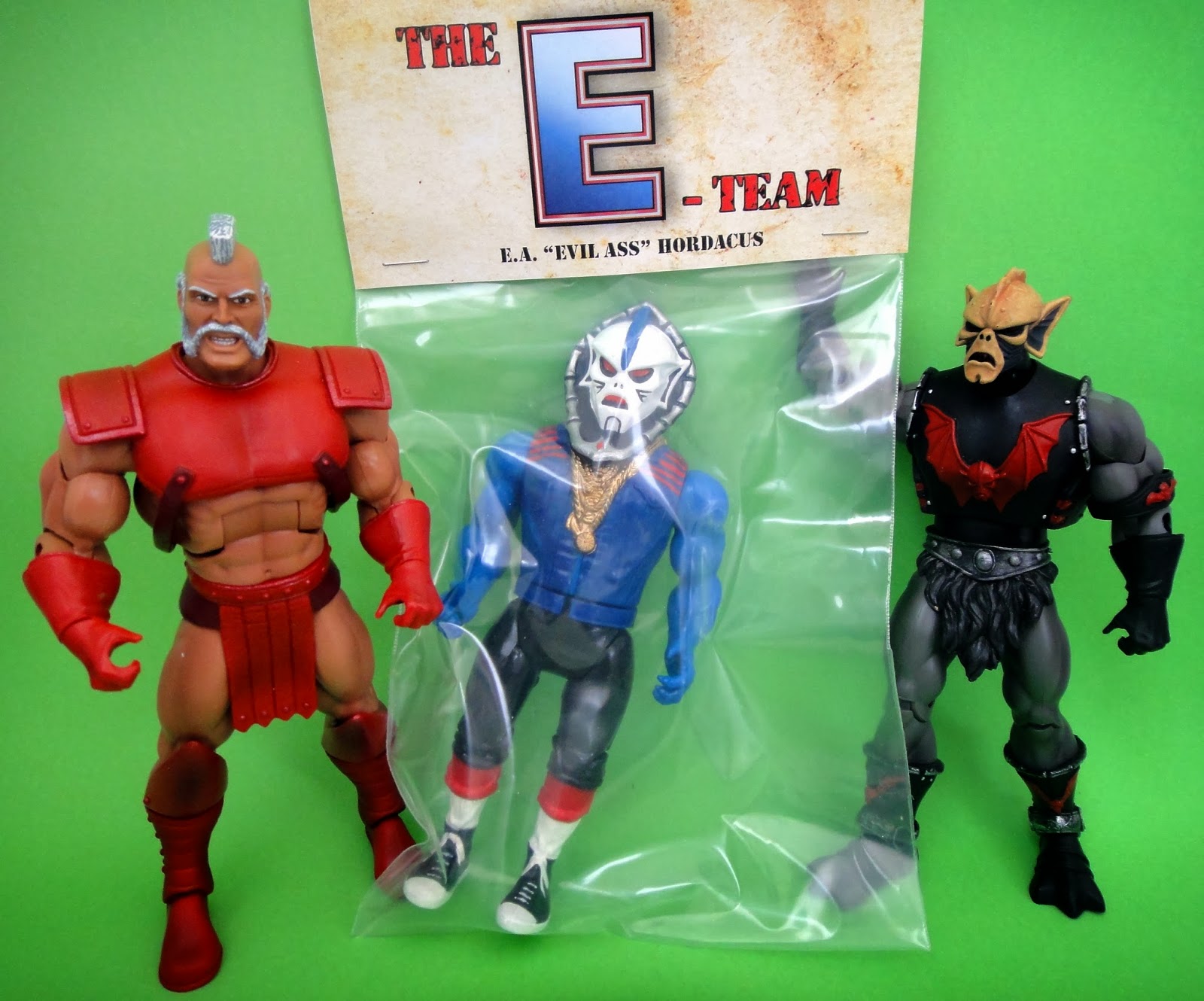 E.A. Hordacus, in case you couldn't already tell, is a mash-up of The A-Team's B.A. Baracus and my bro Hordak. He's from a set of figures that Chris created known as THE E-TEAM. Yes, the 'E' is for 'Eternia.' Duh.

Here's another one of their members: Octal Boscuss. 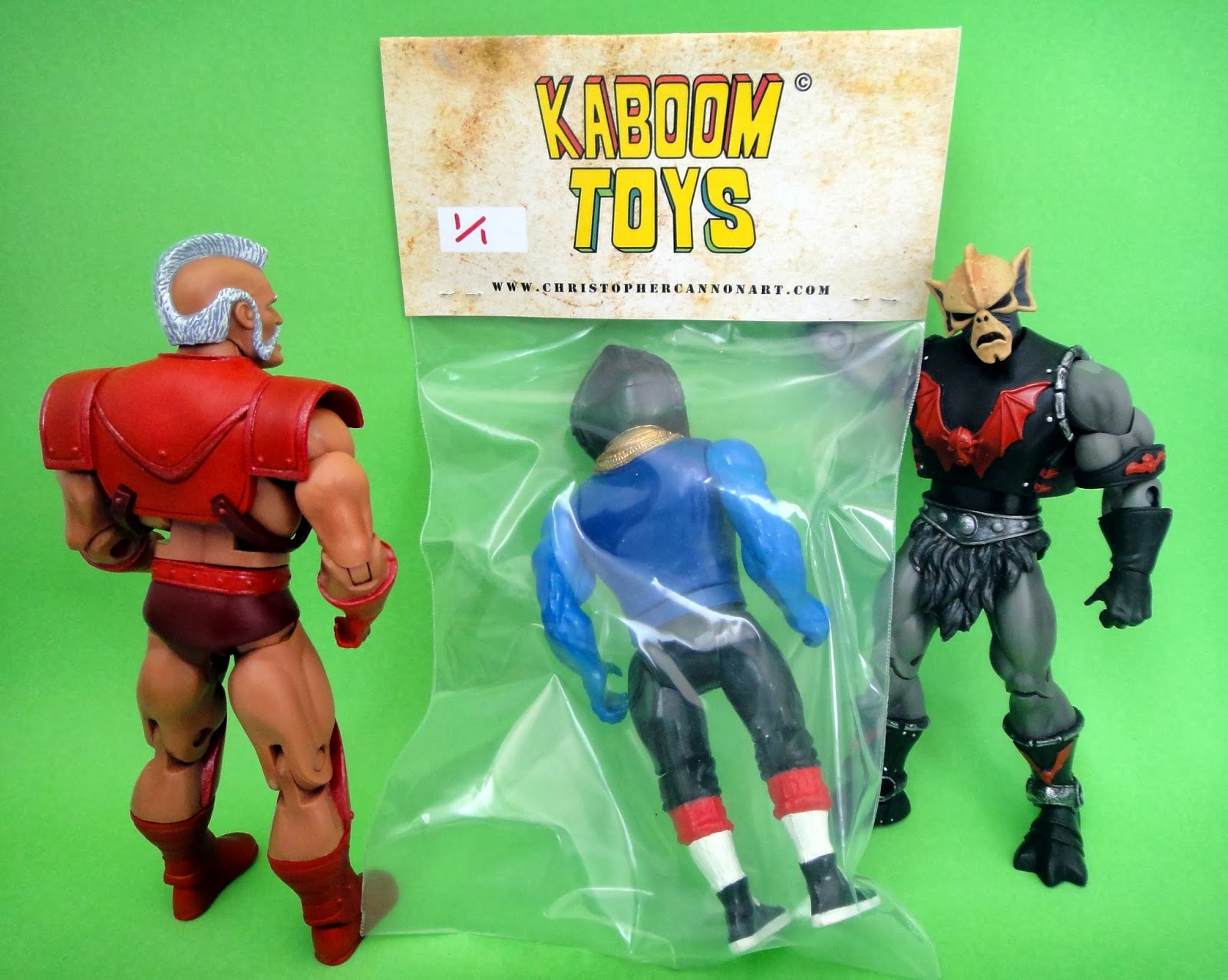 Now, the original E.A. Hordacus had long since sold-out, and I was heartbroken, so I commissioned Kaboom Toys to make a variant "Filmation-Style" E.A. Hordacus, which is what you see here today. 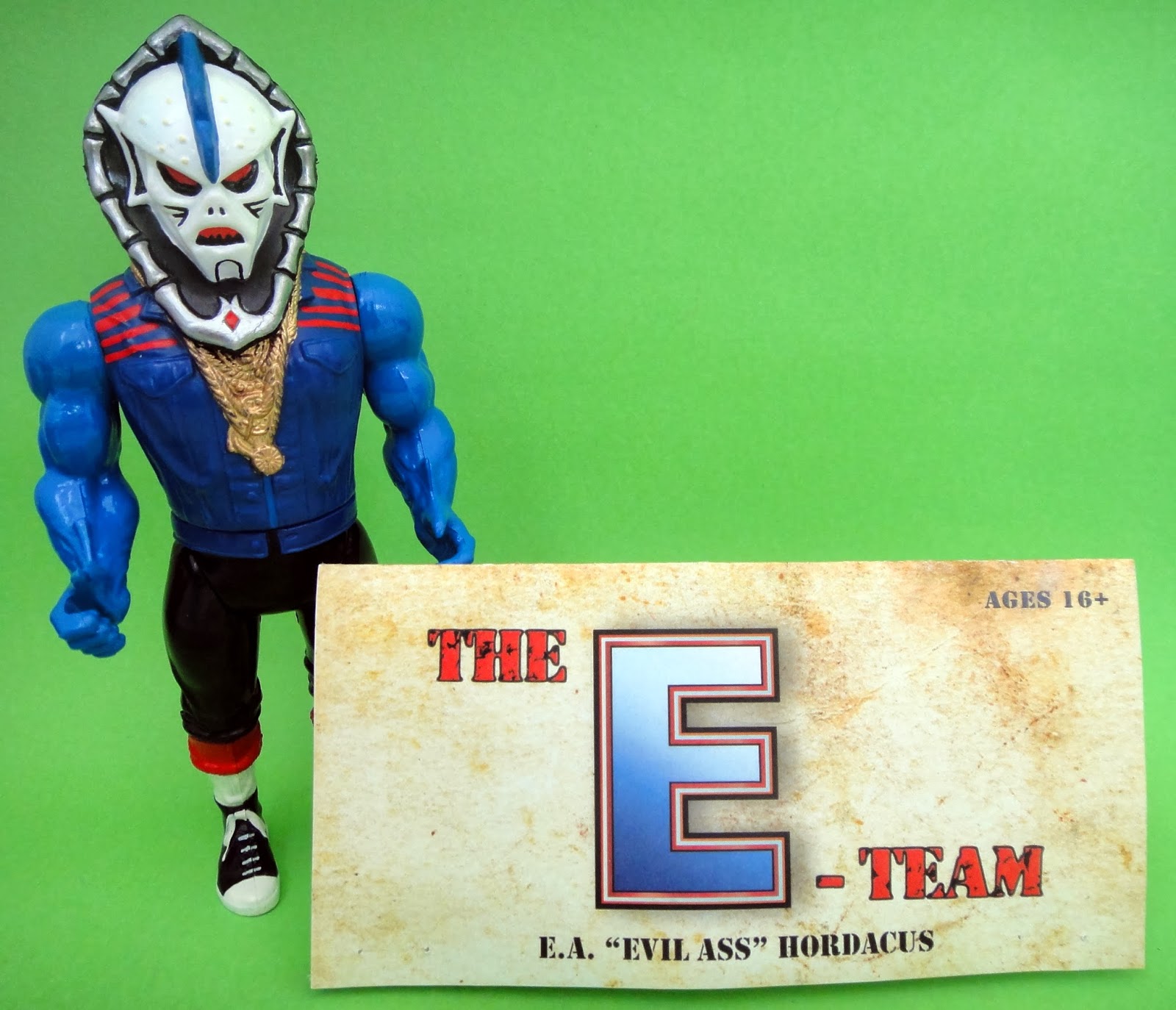 Aesthetically this is an absolutely beautiful figure. Kaboom Toys has made use of magnets to give his arms some added poseability (and some interchangeability if you have other figures with magnetic attachments) and the paint job on this guy is perfection.

The paint detail, right down to the yellow lumps on Hordacus' forehead are immaculate. This is a class act all the way. 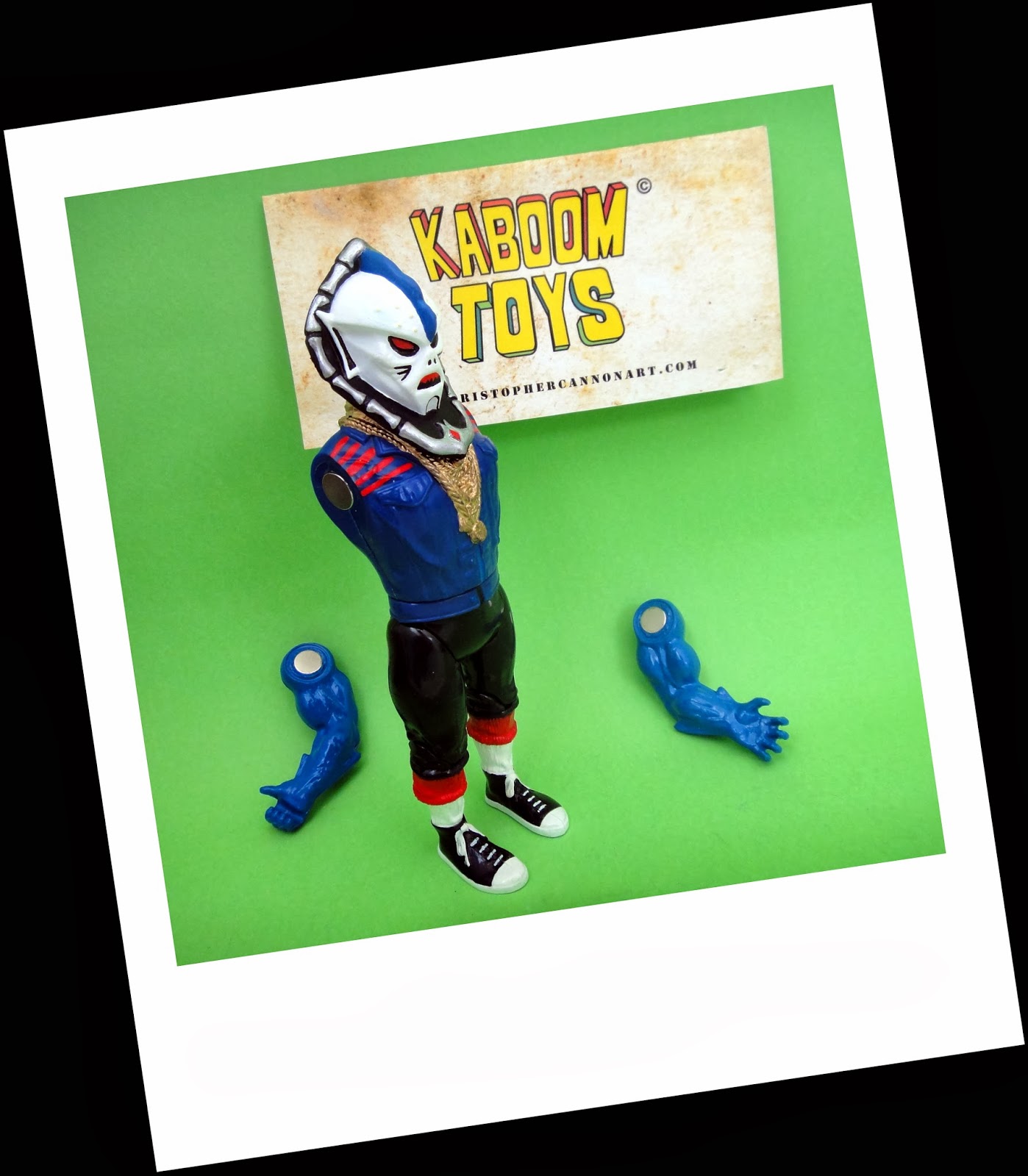 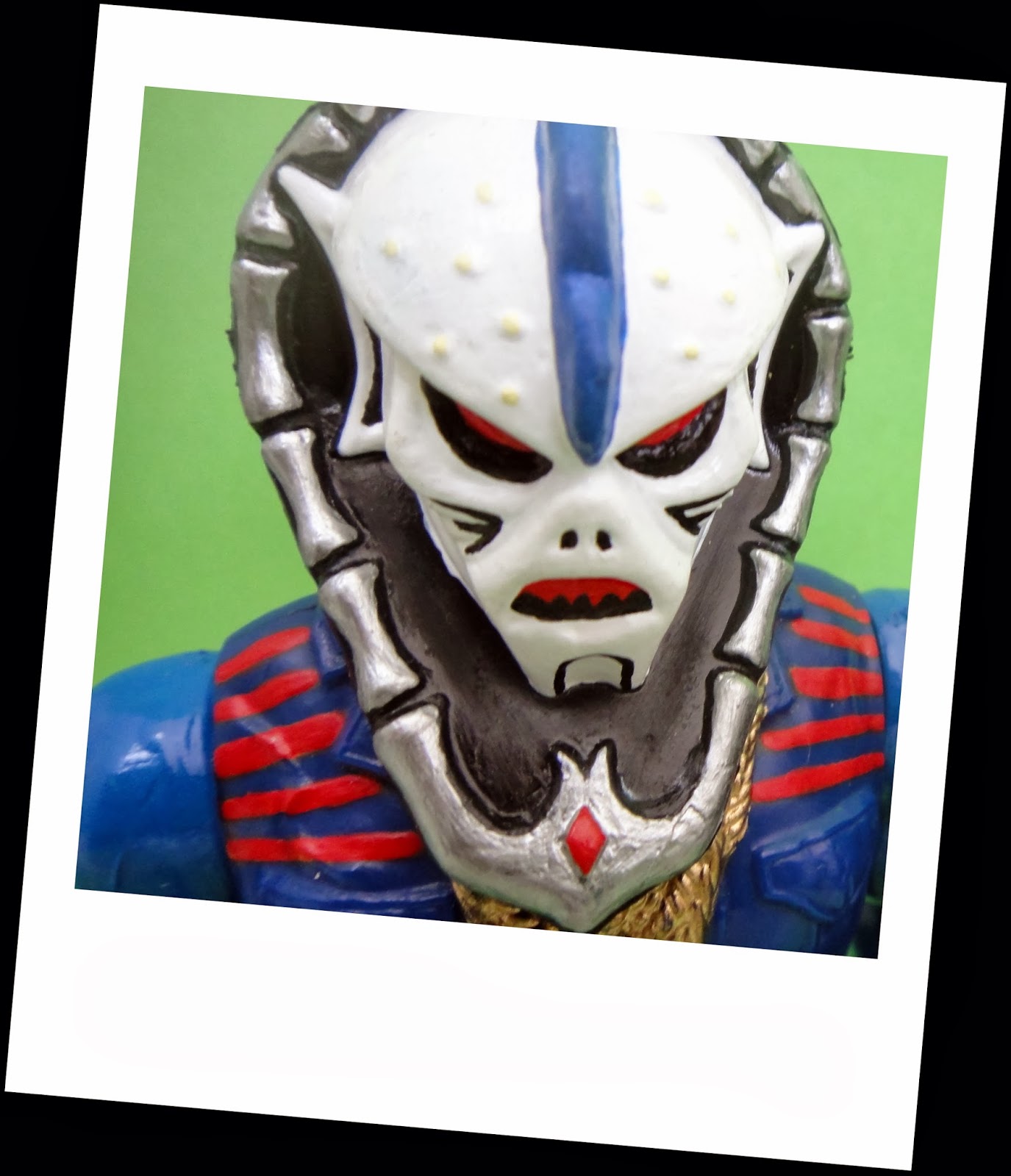 I'm very happy with E.A. Hordacus, and I expect this will not be the last we'll see of him on Hoard World. What also makes him extra special to me (aside from being fantastic and one-of-a-kind) is that Chris Cannon utilised Hordacus for his solo art exhibition prior to his arrival at my HQ. E.A. Hordacus has had quite a few adventures already. 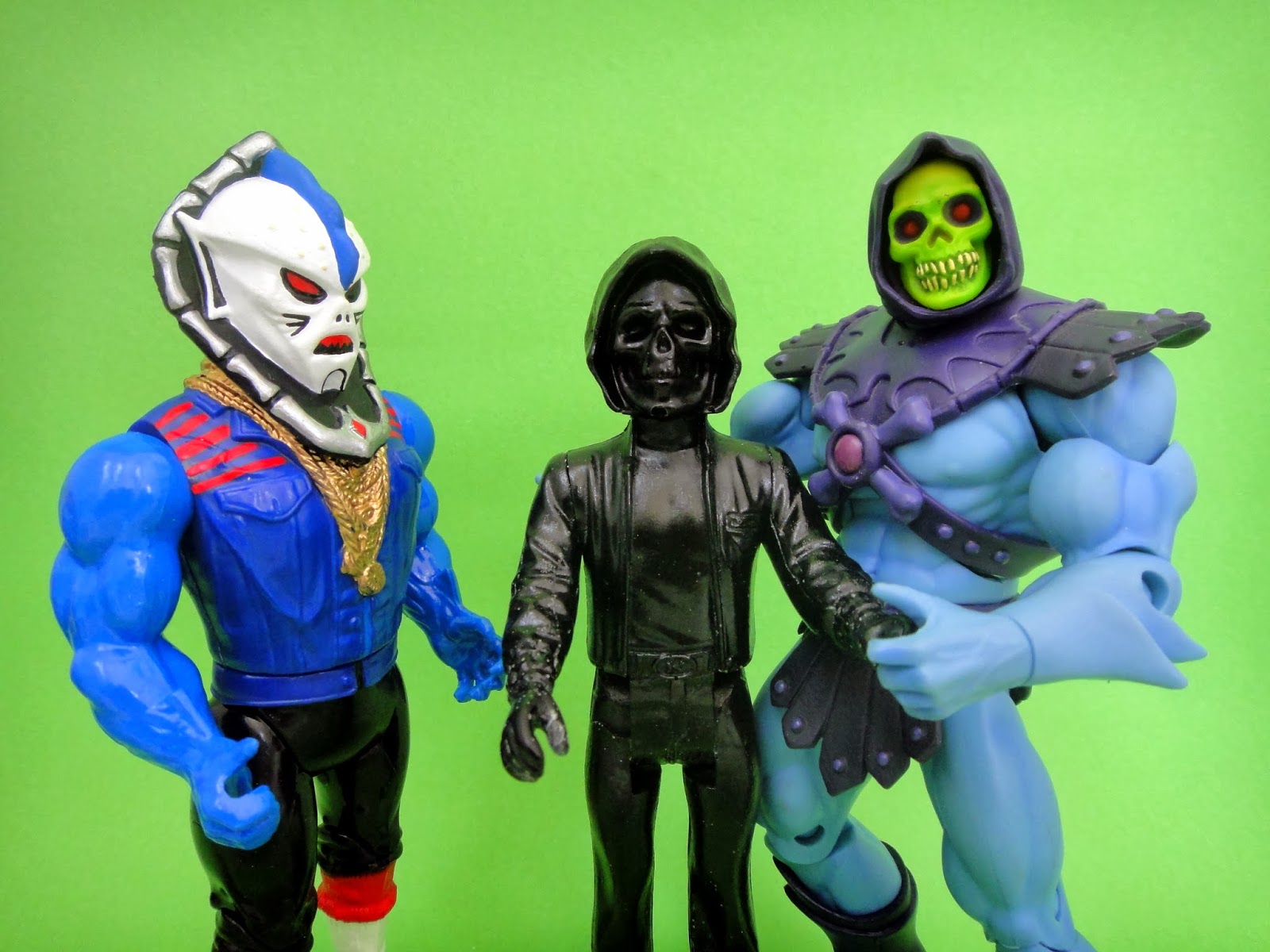 I also picked up The Dark Rider, which is from his Mash-ups of the Universe series of figures, and is a mix of Knight Rider and Skeletor. Fantastic.

But this isn't called HOARD World for nothin'.

I also got a Mash-ups Of The Universe sticker pack.

Of figures I don't own.

And due to their SOLD OUT status will probably never own.

However, I think a sticker pack is a cool idea, while being just about the next best thing to owning the original Kaboom Toys figure. That's what I tell myself. 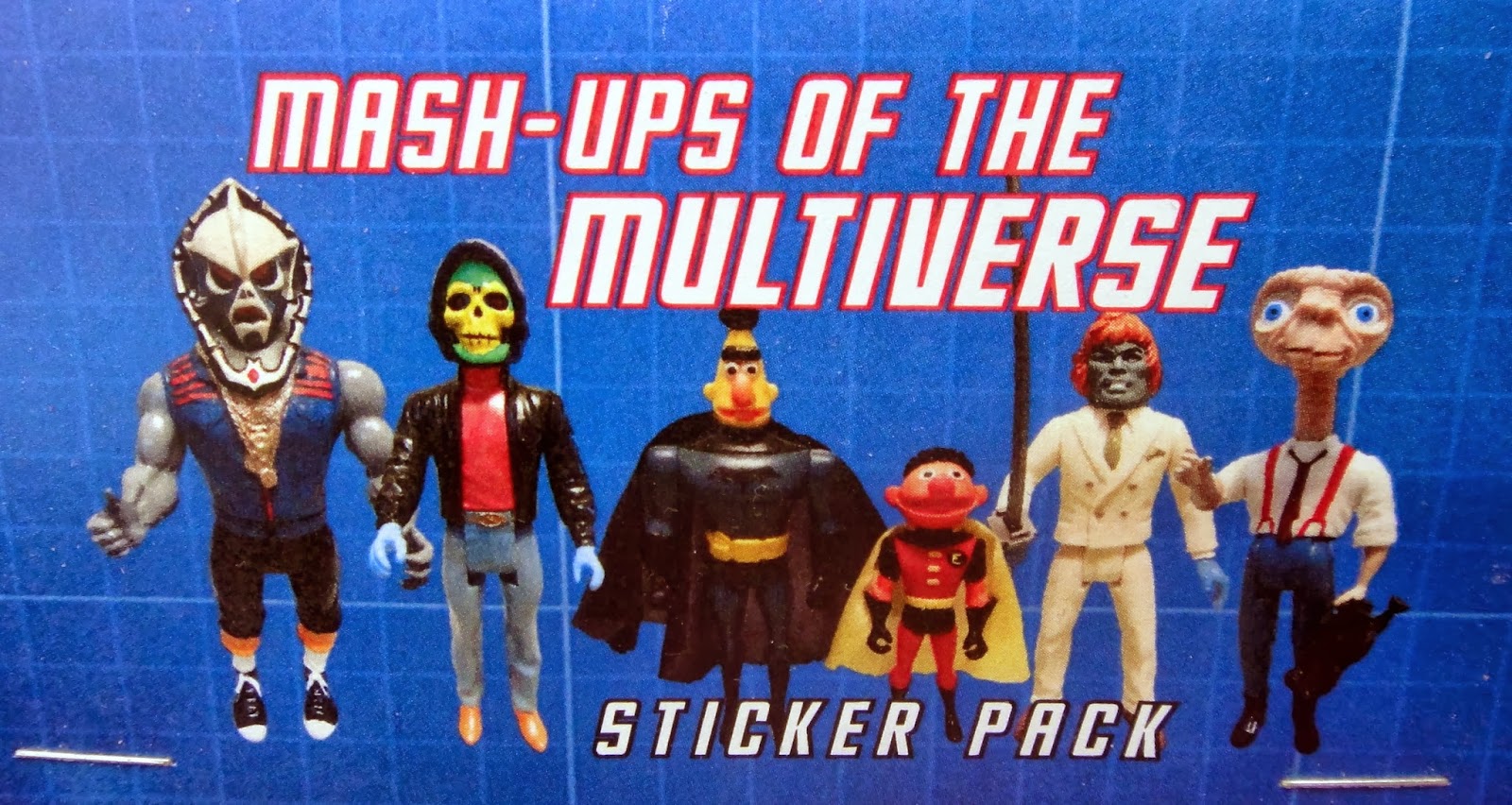 But enough from me. Let's hear directly from Chris Cannon himself as I lazily sprinkle more photos inbetween excerpts of actual quotes from him.

Chris Cannon: "I got into making custom toys after I went to an art exhibition here in Chicago, Illinois (USA) to see the work of my friend Steve Seeley about a year and a half ago. Among the works on display were a mixture of paintings and 4 resin cast action figures. They were based off of the characters in Steve’s paintings, which consist mainly of portraits of toys and celebrity pop icons. After inquiring with Steve about the toys he told me a friend had made them for him and that I could find him online through Facebook. A few days later I was on the trail to seek out this secret group of bootleg artists he had mentioned. Having been a huge toy collector for over 15 years I had to see what all the hype was about. So I quickly made some new friends on Facebook and started breaking apart my loose action figures and a year later I’ve made over 40 unique characters." 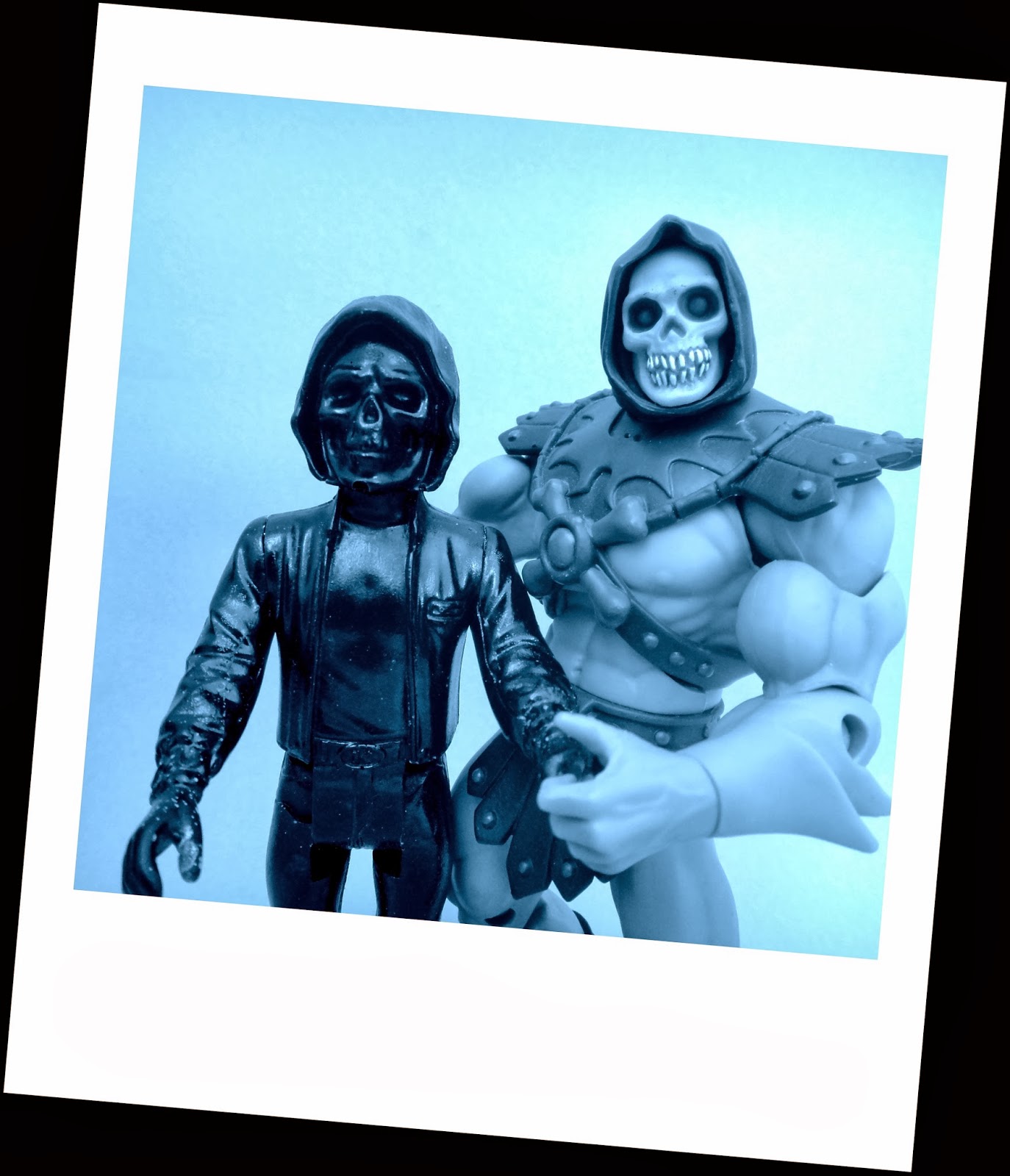 "I was already aware of artists such as Ron English, Jason Freeny, David Healey and the Sucklord from traveling to New York in the past and seeing their work online or in Clutter and Juxtapose magazines. I have an extensive collection of custom vinyl, wooden, plaster, resin and bootleg toys, not to mention the thousands of comics and childhood toys I still collect like Super Powers, MOTU, Star Wars, Transformers, etc." 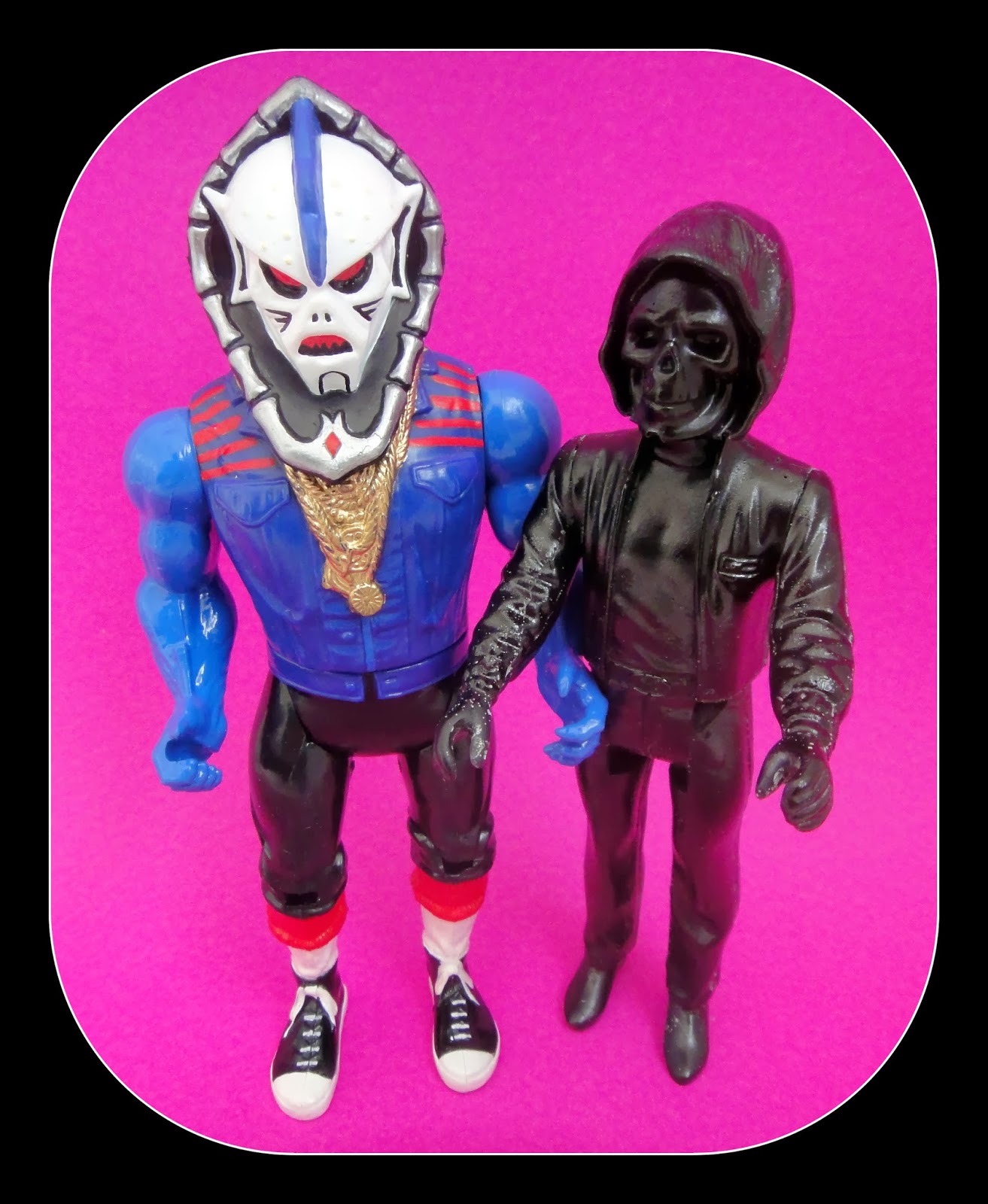 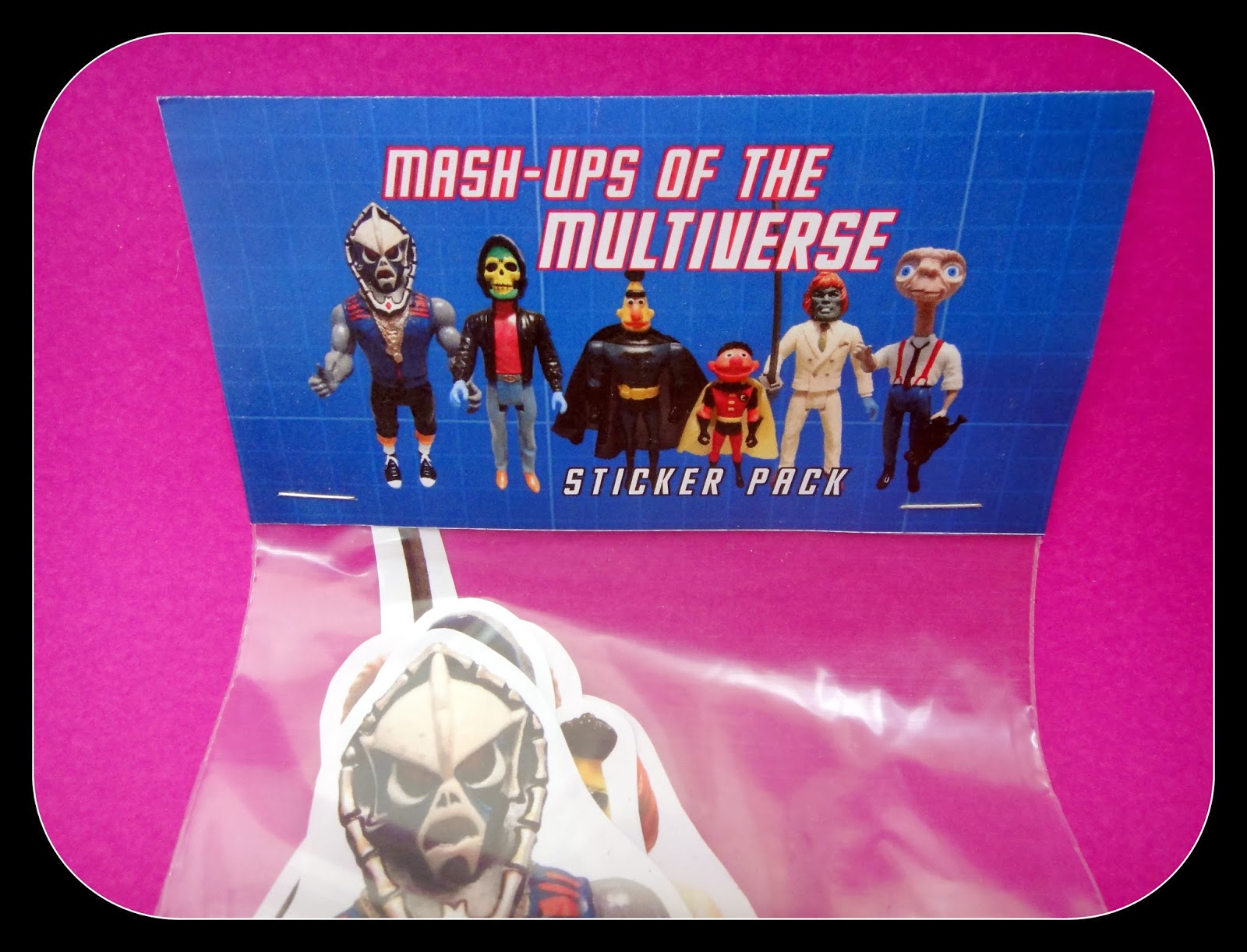 "My earliest attempts at making custom / bootlegs toys came in the form of a series of alternate reality based figures I call “Mash Ups of the Universe.”

These figures were mostly playful in nature and based off of a variety of toy lines I enjoyed as a child, such as: Centurions, Remco action figures, Ghostbusters, Super Powers and the like.

Once I started to get a more refined skill set I wanted to make a more cohesive set of figures that related to my interests in Pop Culture and T.V. cinema; so I created the ‘E-Team,’ which was a hybrid of A-Team figures and Masters of the Universe.

I thought the balance between new and old toys would be interesting and inventive as well the body scale fit well together. It’s important to note that size and scale play a huge role in what you can combine for a mash-up / custom figure.

I had some old A-Team toys that were damaged so I just started plugging heads into the open neck of a ‘Mr. T’ body and once I stuck that Hordak head in place the lights from heaven shown down on me and birds were singing then I heard bells ringing…or I just said to myself “this will do” and that is the story of how E.A. “Evil Ass” Hordacus came to be." 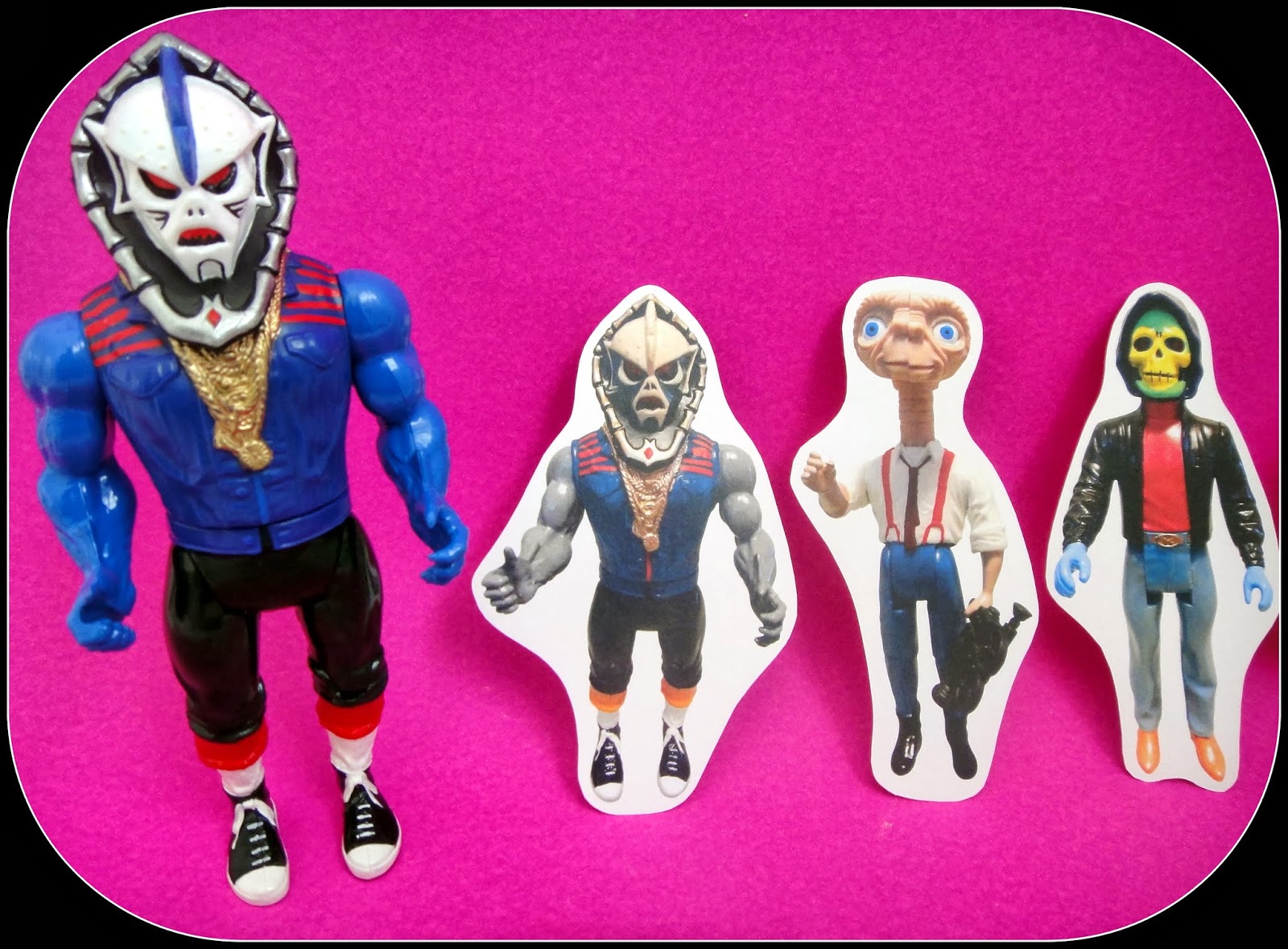 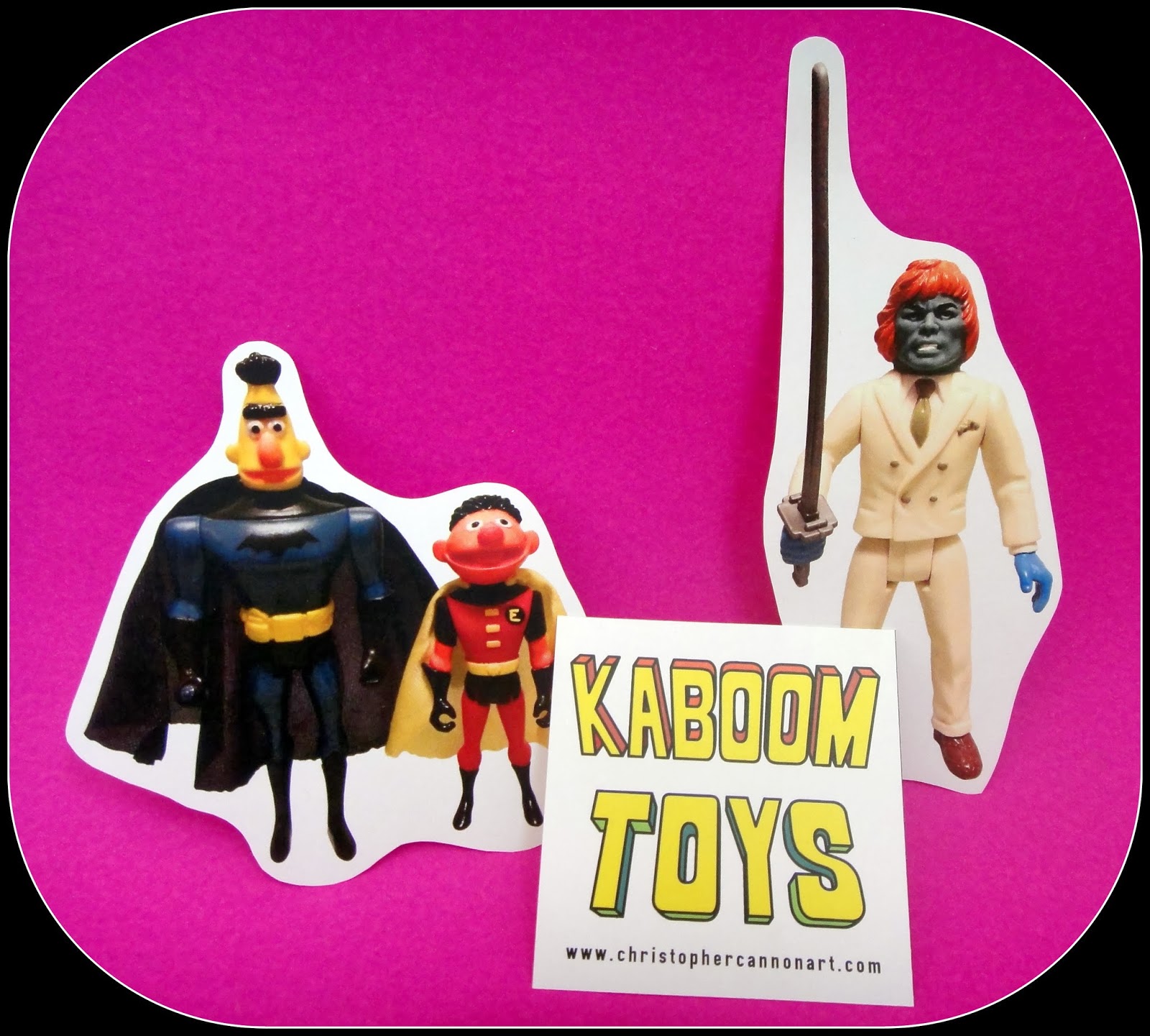 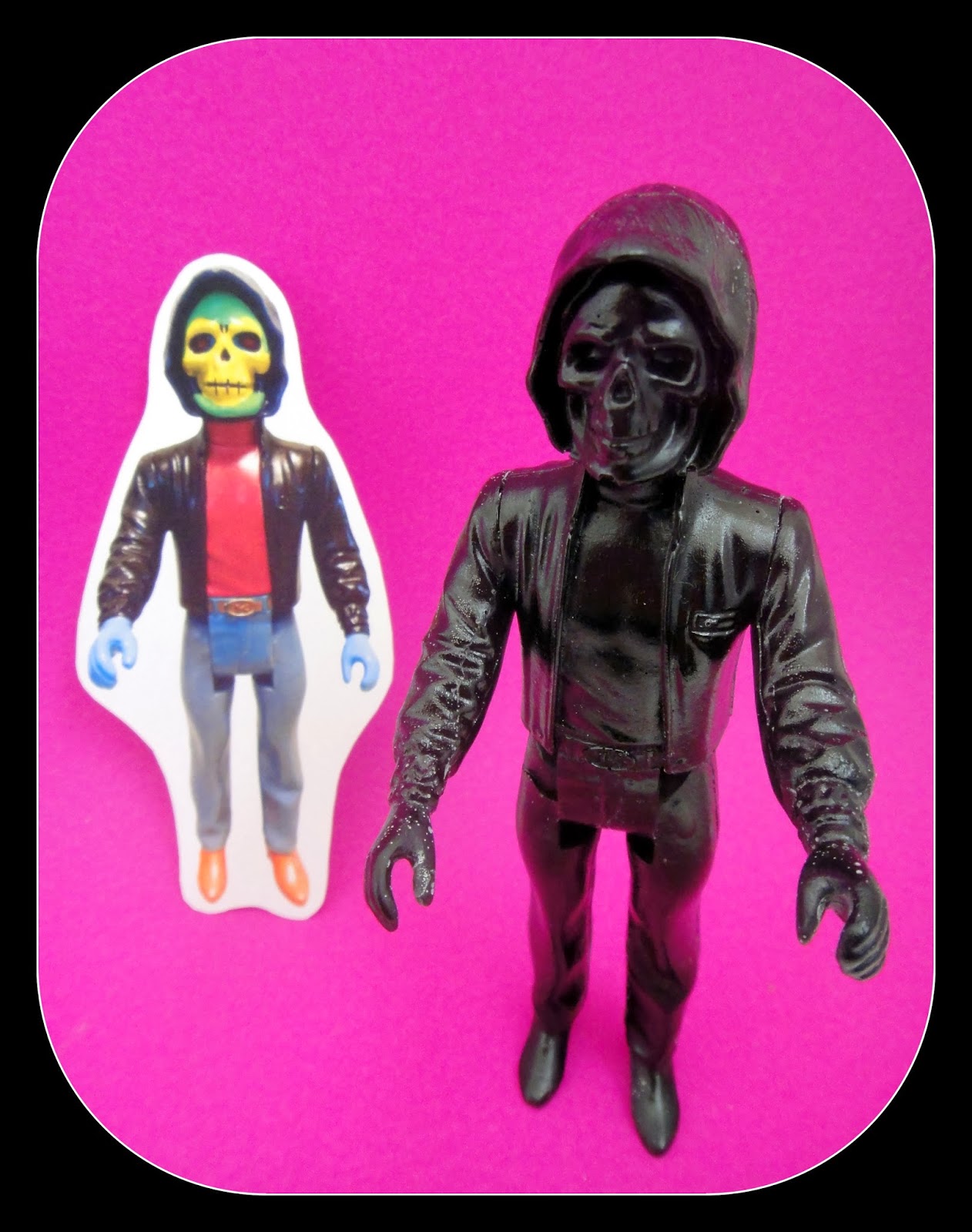 "I’ve made a few molds and cast some resin figures of various toys in the last year but I mainly prefer to make unique one off characters. It’s more rewarding to me knowing that only one figure exists and that it becomes more precious to whomever that buys it. I will make more edition type figures when I get more free time to focus on those projects. Currently, I’m working on a custom HISS tank from the original G.I. Joe toy line, and a small handful of figures for commissions along with my personal creations, on top of teaching college level graphic design and fine art course at two schools in the Chicago suburbs!"

I'd like to thank Chris Cannon for taking time out of his busy schedule to talk to Hoard World, as well as for his wonderful work on my one-off Filmation E.A. Hordacus! He is currently taking commissions also. You can contact him at http://christophercannonart.com/ and at the Kaboom Toys Facebook page!

Don't forget! For a limited time only, Hoard World readers can get 20% off at the Kaboom Toys store by using HOARD666 as the discount code at check-out! (Offer expires 16th March 2014) 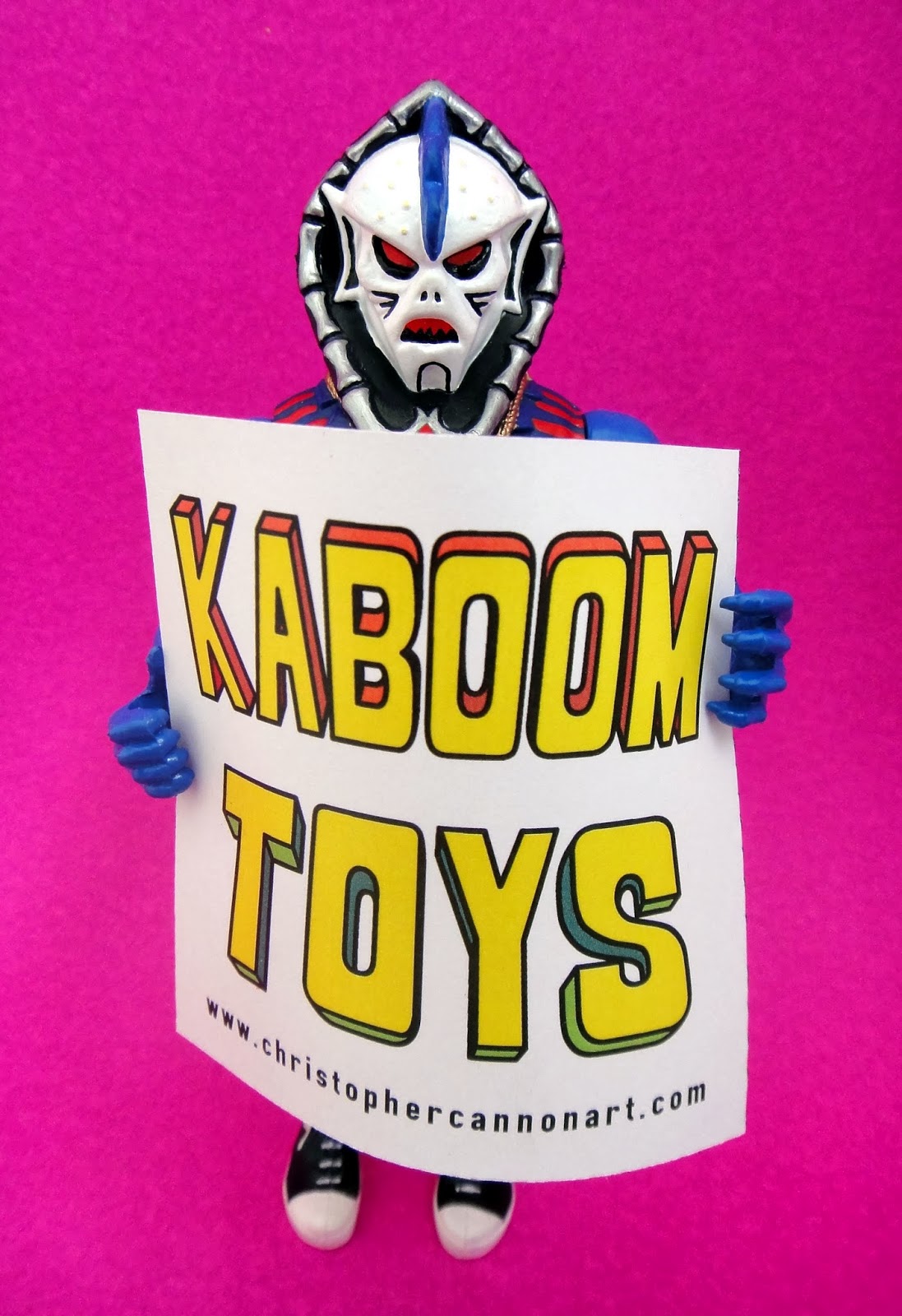 And thanks again to all the Toy Artists that featured in these last four Spotlights!