It's New York Toy Fair 2014, and while I'm sure, even as I type this, not everything has even finished being revealed, I thought I'd quickly chime in with the reveals that already, I am absolutely beyond stoked about.

Let's start with NECA's upcoming series of 7" ALIENS figures (pictured) that are on its way to a store near you in July.

Add to that, the awesomeness of a 7" Kane figure with the facehugger suffocating him through his space suit helmet, and this line is really coming together.

Next up, is some of the fantastic Mattel announcements for their Masters Of The Universe Classics line.


It's been confirmed that we are in fact getting a CLUB ETHERIA sub which will include long-awaited She-Ra: Princess of Power figures like Madam Razz, Broom, Light Hope, Double Trouble and Entrapta! Brilliant. What a great move.

But as if that wasn't good enough, we also get glorious sneak peaks at upcoming MOTUC figures like RIO BLAST, Kowl and Loo-kee!


"But I don't care about Lance Henriksen or Madame Razz or Rio-Blast!", said NOBODY EVER.

Just in case, you happen to be reading this Mr./Ms. N. Ever.....there's still SO much more that I am genuinely, wide-eyed-with-wonder-like-a-child about!

But that's not at all.

If we can go back to Mattel, for a moment, they have so much more up their sleeves aside from their MOTUC stuff.

In the new TOTAL HEROES line (that I will stake my claim right now and declare to be the "Super Powers" of the new millenium for DC), they further cemented my inhuman love for these new figures with a reveal of my main man, FIRESTORM.

But even if I'm overreacting and DC Universe Classics were actually the Super Powers of the new millennium, it's neither here nor there.

Because the MOST EXCITING NEWS of my millennia-old life has arrived.

In a move, the likes of which I have literally fantasized about for YEARS, to mark the end of the DCUC line of Four Horsemen-sculpted DC figures, Matty will be releasing a one-off SUPER POWERS line in 2014.

A Kalibak Build-a-Figure in his traditional Super Powers colours.

I am still squeeling inside my own mind canyon.

If I could experience real human joy, I would be hugging the nearest person in the room. Alas, the life of a Hoarder can be a lonely one at times. And the closest thing to me right now is my old pal, PROCRUSTUS.

And as you can see, he already has two pals to help him *literally* bear the weight of the world.

But why am I PROCRUSTinating? LOLZ. 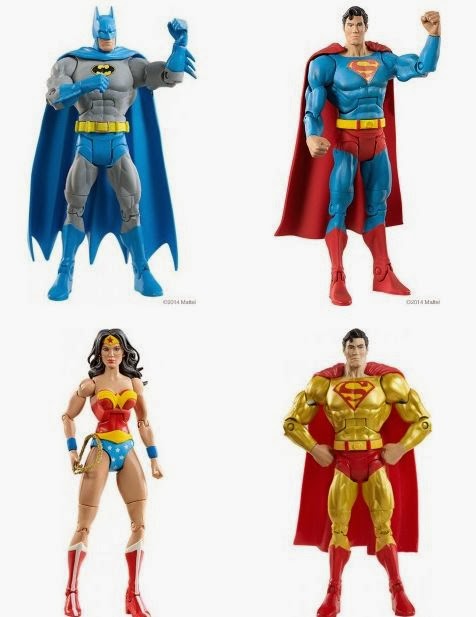 I still can't quite believe this is real.


Now, I won't lie to you. Instead of a Gold Superman, I would've loved a Super Powers Robin or even a Lex Luthor or Brainiac. But we've kinda already had all of those figures in the regular DC Universe Classics toy line. This is about completing the series and having some nice SUPER POWERS style packaging to go along with it. It's truly beautiful. There's a lot of Toy Love going out into the atmosphere today, let me tell you.

And Green Lantern as The Riddler is truly INSPIRED.

That's it from me!

I'll leave you with one last little nugget of goodness - reveals of more Masters Of The Universe Mini-masters! A mini-figure line that I am already completely besotted with.