WHY I SOLD MY BIG TROUBLE IN LITTLE CHINA ACTION FIGURES. 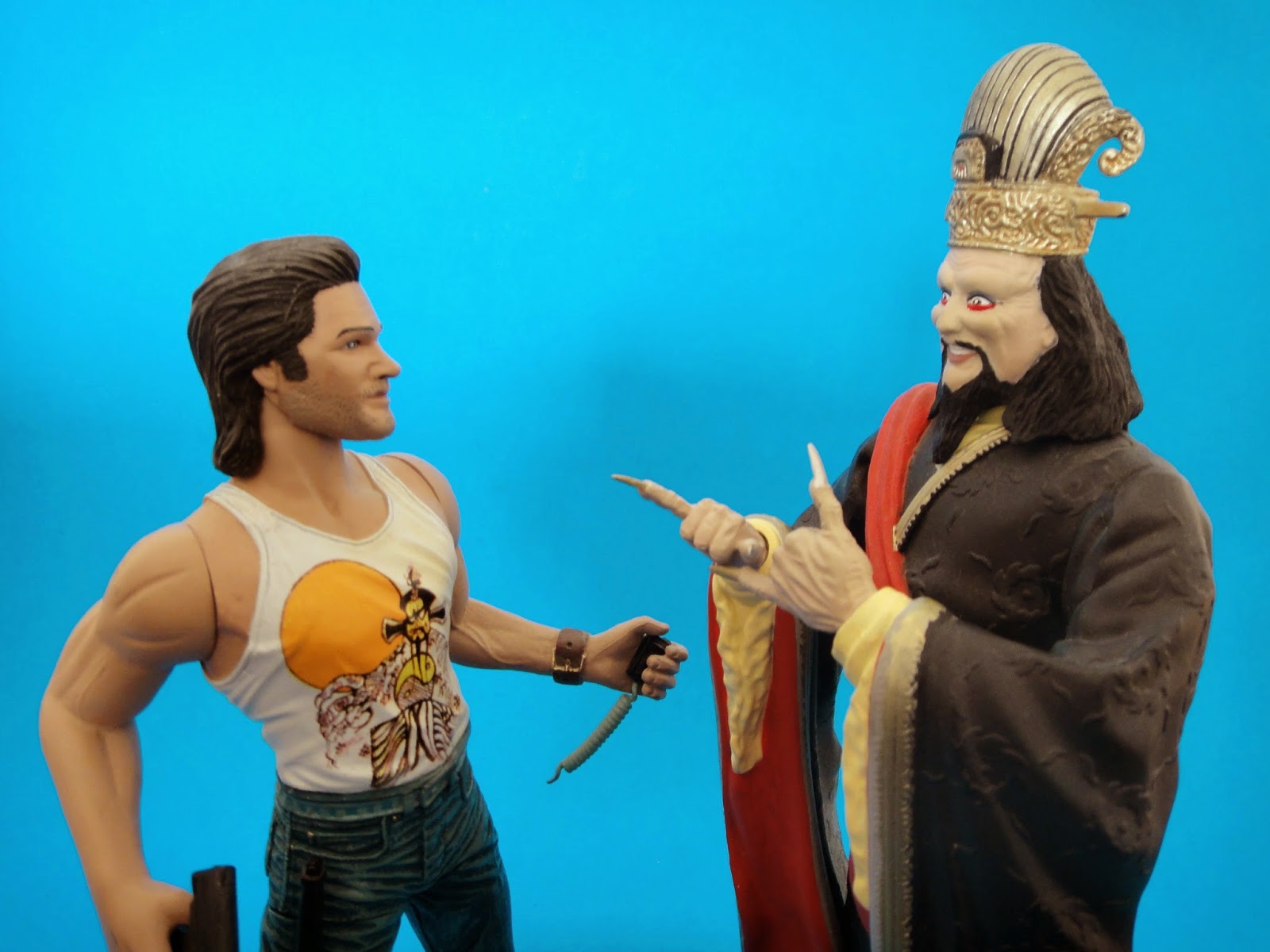 I make no secret of the fact that I help support my addiction to stuff by selling my other stuff. It's the circle of life. And in a real world scenario where you have finite space, the reality is you just can't keep everything. That's just how it goes, bro.

We've been through this before but this is called Hoard World for a reason. I have a problem. Or had a problem. Or am getting better at least with incremental amounts of small yet important progress.

Two years ago when I started Hoard World, never in a million years would I have thought I would ever sell my Big Trouble In Little China figures. Never. They weren't for sale. At any price. The fact that 10 years into the action figure series' existence they had become quite rare and incredibly sought after perhaps further cemented my resolve in a reasonably unhealthy way.

The Hoardax of yesteryear would rather have been buried with those figures than let anybody get their greasy mits on them. Besides that, it proved that I was a true fan of John Carpenter, Kurt Russell and the major motion picture Big Trouble In Little China, right? Only a true fan would have bought the Jack Burton figure the day he was released! Only a true fan would have picked up David Lo Pan and Egg Shen a little while after on a discount table for $10 a pop because the figures were a massive commercial failure and the toy company that released them was never heard from again.

All wrong. (Except for the part about the discount table, the massive commercial failure and the toy company never being heard from again. Those bits are fact.)

But even though we can all agree my Elitist Fan Pride was misplaced and whether you own hard to find licensed merchandise of a cinematic/televisual/animated/musical/comicbook property is no indication of how much you love something (although obviously it can be),  why then did I end up selling my Big Trouble In Little China figures? 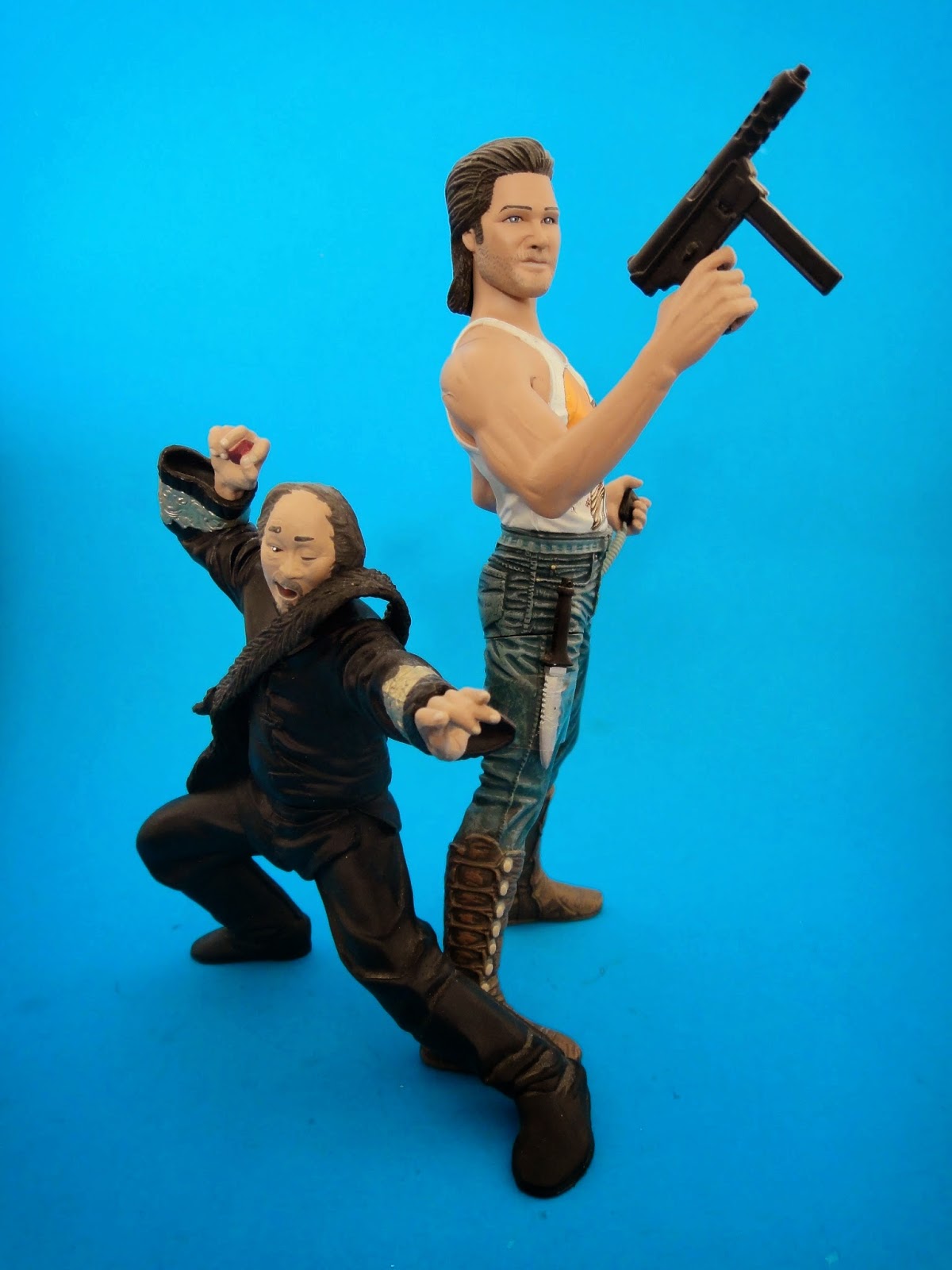 I have a few reasons that I'm going to share with you to answer this. And I'm doing this in the hopes that maybe there's people out there that are facing a similar thought process or circumstance about things you own and reading this will help you decide what you want to do about them. It's taken me literally years to get to this place.

There's do doubt that if you're a fan of Big Trouble in Little China that these were cool figures. But when they were released by Mirage Toys via N2 Toys (who were also responsible for Mad Max, The Matrix and The Tick Live Action figures) in 2002, they were clearly well ahead of their time. 2002 was a very different toy climate from what we have today. Sure, there were McFarlane's industry changing figures and Mezco were doing some very cool and interesting stuff and Palisades were wowing everybody with the amount of licenses they could pick up but NECA was barely a glint in the Kraken's eye and Funko were still well and truly entrenched in Bobbleheads.

I might be remembering incorrectly but there didn't seem to be a whole lot around in the way of movie figures like we have now. And certainly to get an entire movie specific line of figures for the cult film Big Trouble in Little China felt like a big deal. But whether it was a combination of poor distribution, the figures themselves not being really that good or the very different toy buying public of the early 00s just not being that into them, these figures tanked.

Series 1 of BTILC (that included Lightning, Wang Chi and the Chinese Wild Man Monster as well as the Lo Pan, Jack Burton and Egg Shen figures in this feature) didn't hit enough of an audience to go onto a series 2; which I have read would have included Thunder, Rain, Gracie Law and 'Little Old Basket Case on Wheels' Lo Pan.

On one hand, I guess it's no surprise these figures failed since the film these figures were based on didn't hit big at the box office and pretty much signalled the big budget end for John Carpenter while doing no favours for Kurt Russell either. So here we have a film destined for cult classic status that only thirty years later really seems to be getting its dues - it's not that big of a stretch that the action figures would meet a similar fate.

And here we are now: in a very different toy climate with entire new generations of Big Trouble fans as well as the original fans of the past 30 years who have continued to long for more ways to consume one of their favourite films.

This all makes the (to date) only action figures ever made of Big Trouble in Little China pretty sought after items. And they're scarce. I can't imagine they made that many of them to begin with and most of the people who bought them back in the day are not parting with them because they love them. They've transformed from peg warmers and sales table fodder to legitimate modern day collector's items.

With all this in mind, let's get back to the original premise. Why sell them?

Every time I posted a pic on Hoard World in some fashion (either on the blog or IG) that contained the BTILC figures people would react pretty favourably with shock and awe and "What?!!!??? Where did these figures come from? Who made them?" so I instantly knew I had something worth selling.

Just because something is worth selling doesn't always mean you should, though.

Particularly if you're still getting joy from these items. But that's just it. I wasn't getting any joy from them anymore. I had displayed them for about 10 years in various prominent places but for the last two years they had sat in a drawer in a mass grave of other forgotten figures. The only time I remembered I even had them would be when a Hoard Worlder would drool over pics of them or someone would hit me up on Facebook and offer to buy them at "any price."

Any joy I now felt as a result of owning them was based purely in the evil thrill of having figures other people wanted rather than just enjoying them because I liked the figures.

I also couldn't remember the last time I actually sat down to watch Big Trouble in Little China. I remember the theme song and music video (one of the best of all time, really) more than I do the movie itself.

And while the sick thrill of owning coveted figures and plastic likenesses of characters from a film I have fond memories of were one thing, the fact remained that the Jack Burton figure just isn't even a very good Kurt Russell likeness and Lo Pan (while a much better likeness) and Egg Shen were essentially just hunks of unarticulated plastic (especially Egg Shen) barely able to call themselves action figures. Mind you, this was the style of the time.

I don't want to come across as a Negative Nelly, these figures were great for 2002 and if you are lucky enough to own them (or bought them from me....) and you love them? Good. I'm glad. That's perfectly fine. What I'm trying to justify to myself and others is why I went mad and sold them off despite loving them.

But the reality of my life is that I have bills to pay, a finite amount of space and debts to pay back. And right now, even an Egg Shen figure opened and loose but with the card back can go for this sort of money on Michael eBay.

I'd seen Jack Burton for sale on card for anywhere up to a few hundred dollars. The cheapest I've seen him recently was about $199 in a vintage toy store. And he hardly ever turns up on sale on eBay at all.

We're at a point in time where 80s nostalgia is hitting peak levels and showing no signs of slowing down. Just this year, there are multiple options to own a Kurt Russell Snake Plissken figure in a variety of scales (12", 3.75" and 8") either released or about to be. Prior to this, we haven't seen a Snake Plissken figure since the Movie Maniacs Escape From LA release in 2000.

I was no longer at a point where I still believed that these Big Trouble in Little China figures were going to be the only figures ever released, ever. In fact, even as I type this, Funko are about to release BTILC Pop Vinyls any minute.

Not that I plan on buying these at all but surely this means it's only a matter of time before we get new, articulated BTILC figures with nice new sculpts and likenesses. When this happens (and it will happen) just remember that you read it here first. Probably.

And how much are the N2 figures going to be worth to sell when they are supplanted by superior releases? I predict a tonne of them will turn up on eBay that day. (Unless the new figures are a disappointment in which case the value will only increase).

So that's it. That's why. I wasn't digging the figures that much anymore (they felt dated and a bit crappy now to me), I like money (they sold on eBay almost immediately for $175) and new, better figures are moments away just around the corner (time for an upgrade).

If you're looking at stuff you own now and not feeling "it" anymore but contrariness or a misplaced sense of loyalty to the property is holding you back - stop it.

I'm no less a worthy fan of Big Trouble after selling these than I was beforehand. You don't need to own an action figure likeness (or any *insert merchandise here*) to prove this to yourself or others.

It makes me feel powerful and in control to think that I am less of a sucker for a character likeness now than I ever have been. In the past two months I have off-loaded all my other Kurt Russell based figures for similar reasons. I'm about to purge all but a handful of my Movie Maniacs figures as well - which is something I also never thought I would do.

And when I see the Lance Henriksen Bishop from Aliens figure in stores at some point soon, I hope I have the strength to walk away because although I love Lance - I probably don't need to own him in plastic. (All bets are off if I see a decent Chris Walken action figure though you guys)

C'est La Vie 2002 Big Trouble In Little China Figures! You will live on in my plastic slime-filled heart and photographic memories. I look forward to your imminent successors. 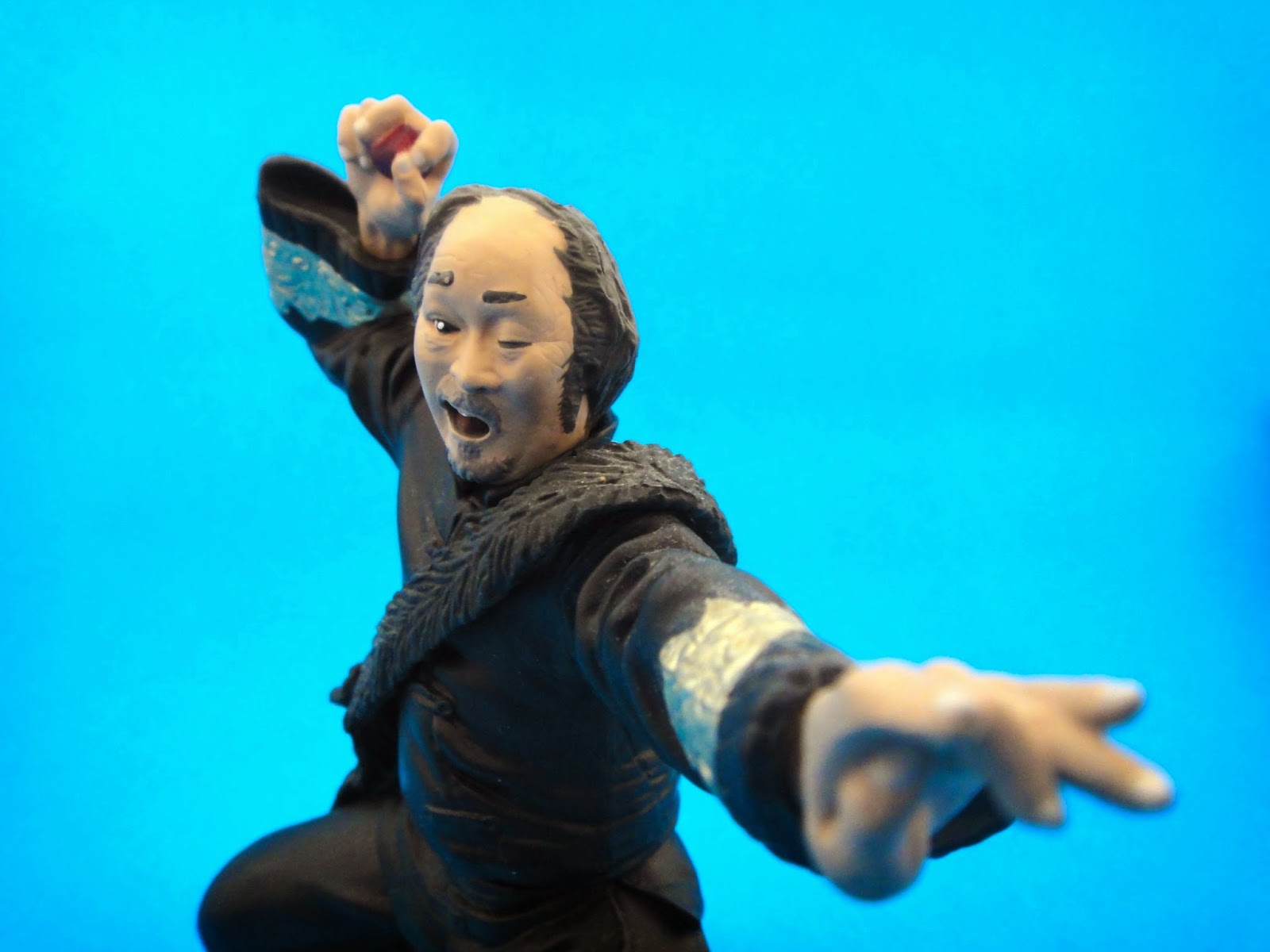 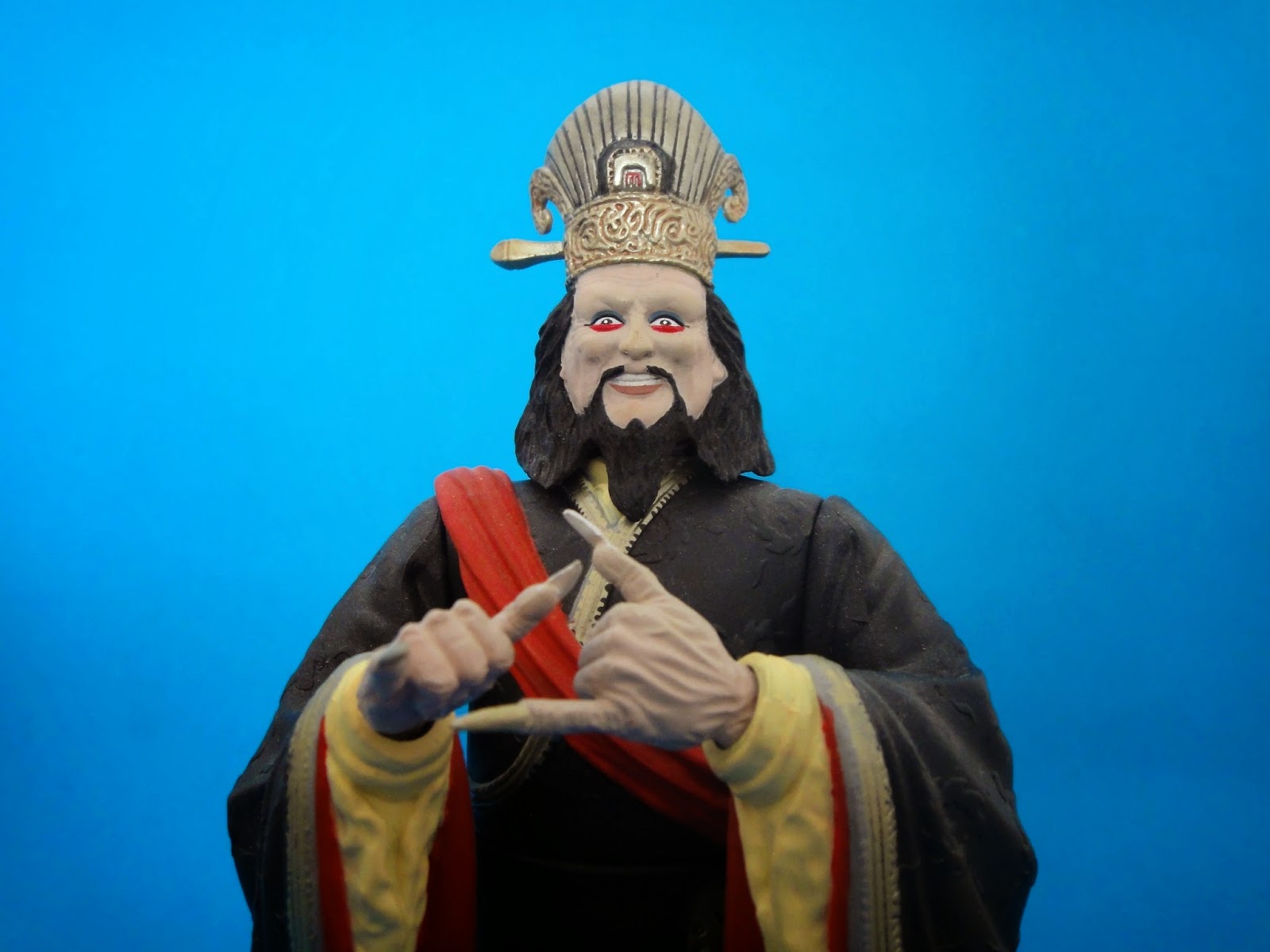 Just remember, your current disinterest in stuff you own can be somebody else's pure joy and happiness! And make you some healthy dollars in the process. Making some money off castaways from your collection is not a dirty word (or sentence for that matter).

I thought I might regret sending these guys off to that big eBay in the sky but to be perfectly honest, aside from writing this article, I haven't given them a second thought.


EDIT 3.2.19: As of April 2019, Google+ is no more and as such, any comments this page received from a Google+ account or were answered by my "Hellz Hoardax" profile are deleted from the universe. Thusly, I thought it wise to embed a screenshot of the comment this blog entry received  from toy sculptor James Groman (link to his site under recommended links) about his work on these very figures! Cheers - H. 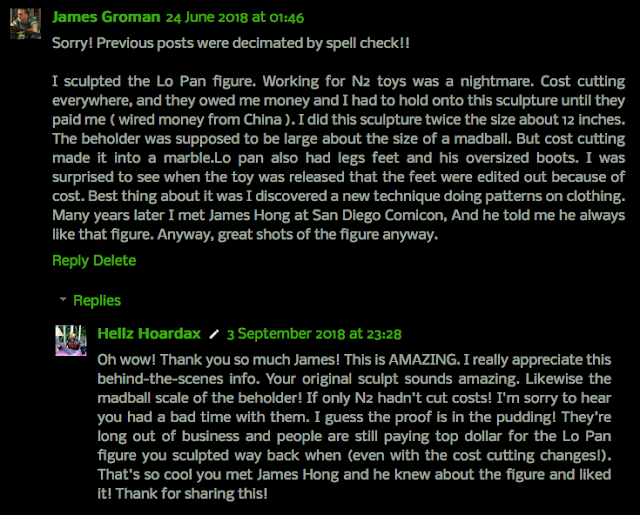