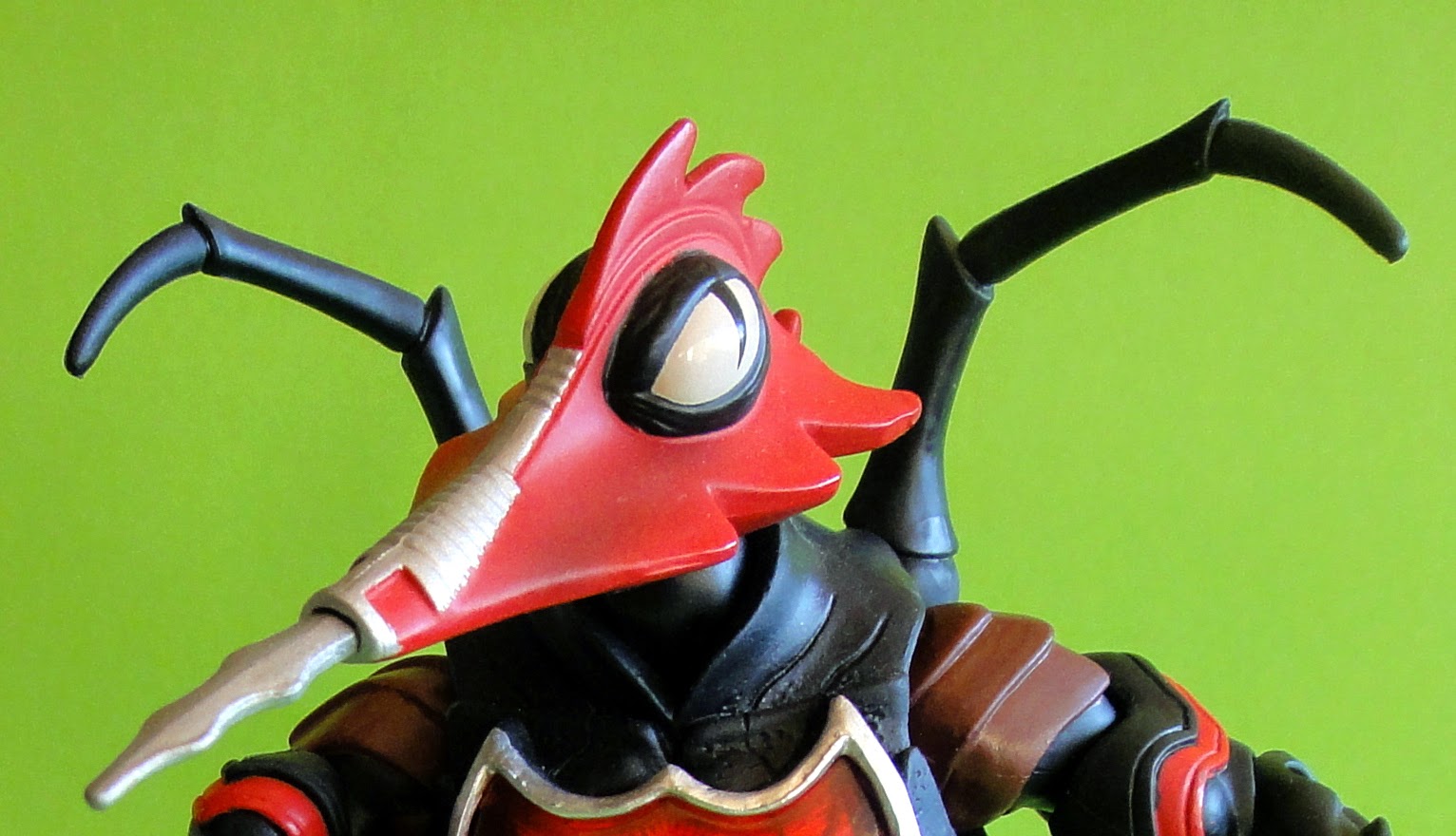 This review was originally published way back in May 2013 on Poe Ghostal.com. It was written specifically for Poe's site so contains many references (and links) to his other reviews. Due to the age of the article, some of the information contained within may have dated somewhat.  This is the complete, unabridged version. You can check out the slightly edited version on Poe Ghostal's site here.

The latest addition to The Mighty Horde's army is Mosquitor The Evil Energy Draining Insectoid, who was released last December. He sold out reasonably quickly after he went on sale but has since turned up on Mattycollector for sale as excess Customer Service Stock. Which has also sold out. If you missed out, there's a pretty good chance he's still floating around on eBay for prices somewhere higher than Chief Carnivus or Dekker but much less than Whiplash or Beastman.

To my knowledge, Mosquitor never made an appearance in the Filmation cartoon or the 200x version. He did, however, get his own front cover fighting He-man in one of those Marvel Star Comics of the late 80s. Issue 8, I believe it was.

As such, we've never really known that much about him. All we know is that he's one of The Horde, he has a Mosquito head and he sucks blood. Oh, and that he's actually FEMALE thanks to The Fwoosh and their magnificent, fact-based logic.

It's well documented that Mosquitor is Pixel Dan's favourite MOTU character EVER. This was irrefutably proven once and for all by this video where Dan's celebration of finally receiving a MOTUC version results in a Kafka-esque Metamorphosis....and Gangnam Style Dancing. These days it's hard to even think about Mosquitor without thinking about Pixel Dan. (Or do I have some kind of problem?) In fact, Poe talked to him just the other day about the concept of a Toy Fan's favourite obscure character being called "My Mosquitor."

The "My Mosquitor" definition revolves around a "guilty pleasure" character that isn't popular with everybody. Now, there's a chance Pixel Dan might read this but this isn't why I'm saying what I'm about to say.....

WHO DOESN'T LOVE MOSQUITOR? Seriously. I want a show of hands.

He/She is a MOSQUITO-headed vampire that SUCKS BLOOD! The vintage figure had a blood-pumping chest action! Are you kidding me? That's objectively the best thing that ever happened.

But is the MOTUC re-imagining of Mosquitor a piece of black plastic recycling? Let's find out. 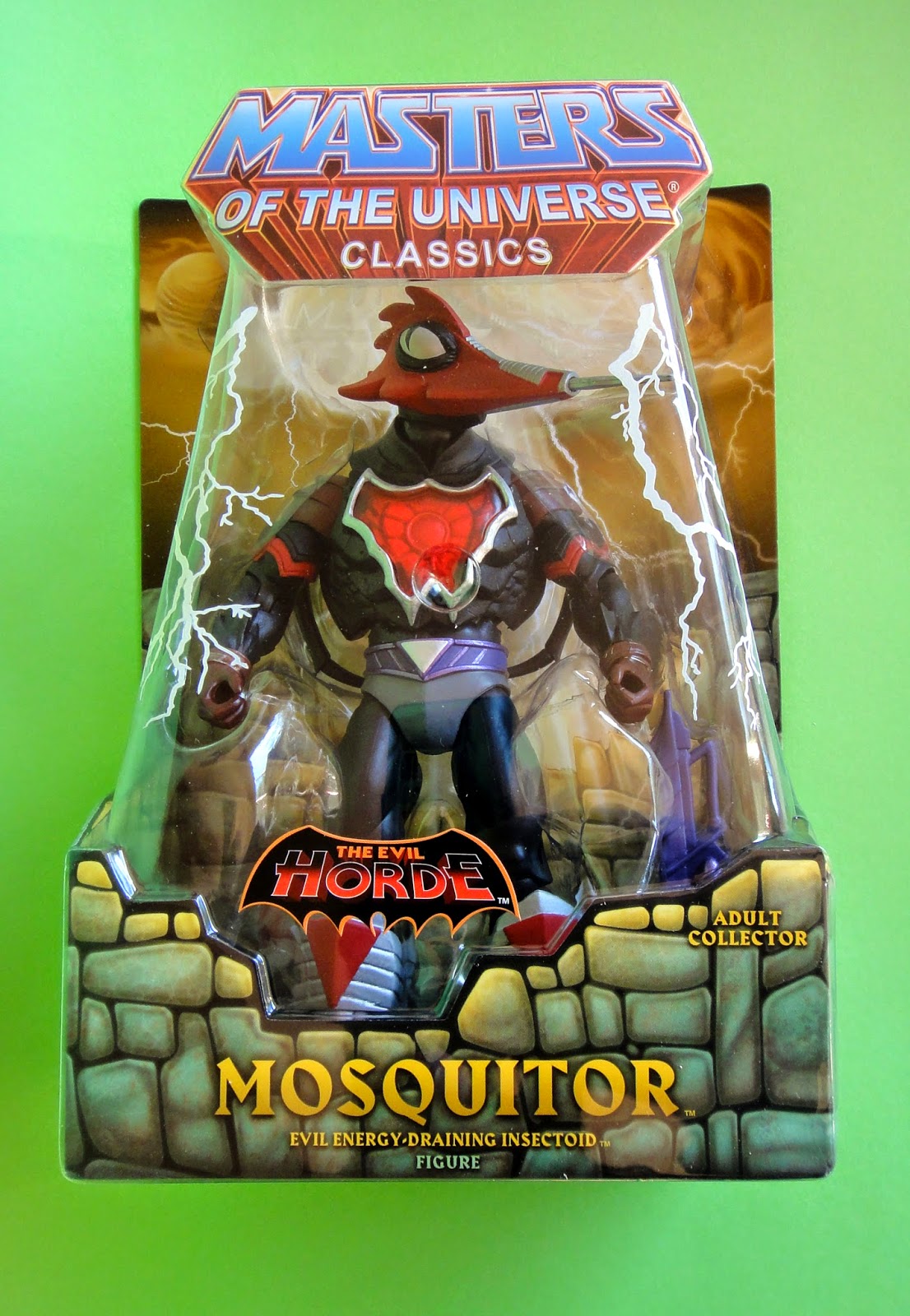 Mosquitor comes in the exact same packaging that we've seen before from MOTUC, time and time again. He's a Horde character so he has the Horde faction sticker on the plastic. What's interesting is that Mosquitor's head is so damn big that from some angles you can't even really see his head enough to make out what he's supposed to be. Taking a photo of the packaging so you could still see his head properly was actually a bit tricky. It's okay though, this isn't my first rodeo.

During my preamble we established that nobody except Mosquitor really knows that much about Mosquitor. But thanks to the Brains Trust at Mattel we now have a "real" name and a short bio going into further detail. Given some of the "real" names that my beloved MOTU characters have had forced upon them in the past in these bios, Mosquitor could have done way worse than Bliddeon Black. It's actually kinda cool. It sounds like a Space Pirate. I'm less sure about the terms "Kribleen" and "Gluubux." This is the problem I have with many of the new names and canon that's now being related to MOTU. The new made up words are rubbish. Most of them sound like baby talk from a guy who's obsessed with 1980s Forgotten Realms novels. (That's actually insulting to Forgotten Realms - I have no problem with the town of Phlan.)

The bio also infers that Mosquitor is a bit of a dumb arse. Apparently he tries to suck blood out of rocks. Even our earthly mosquitos aren't that dumb. So, what was conceivably one of the most terrifying members of The Horde or really, any of the bad guys in MOTU is just another idiot. Who tries to suck off rocks. Great. Nobody has learnt anything from Prometheus or Jango Fett, have they? I just don't want to know the backstory of ANYTHING cool with a past that's shrouded in mystery, ever again. Ignorance truly is bliss. 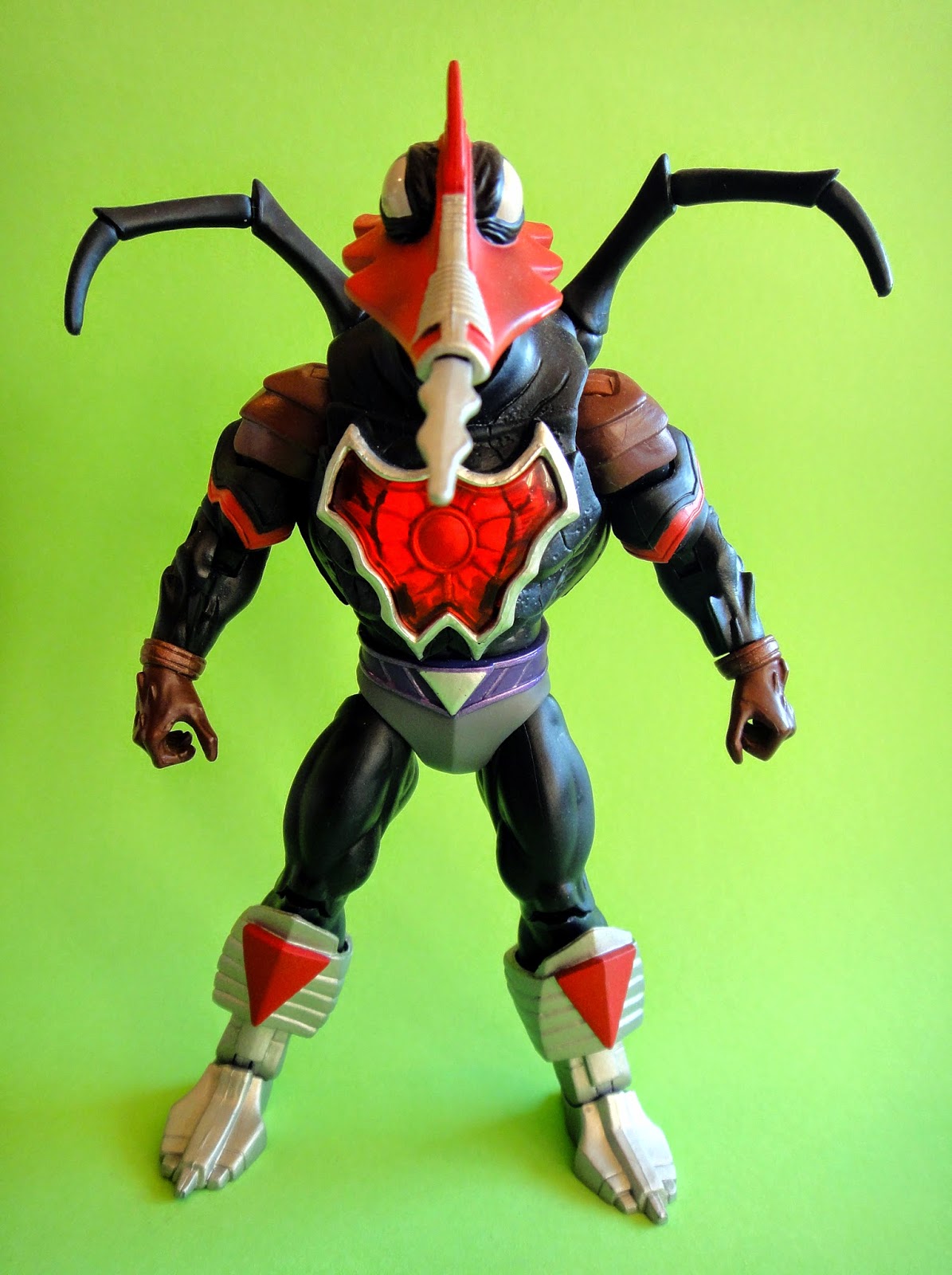 Mosquito has a fantastic sculpt. There's some obvious re-used parts which is to be expected by now but they blend in so well with all the new stuff that you could tell me he was made of all new parts and I'd almost believe you. The re-use of parts that stands out the most for me is the extra insect legs that we've already seen with figures like Webstor and Buzz-Off. Whereas Webstor had four extra insect legs (which for me, really served that figure incredibly well), Mosquitor only has two, just like Buzz-Off. In fact, Mosquitor's insect leg placement is kinda like a reverse Buzz-off. I feel like they've now exhausted all the places they can add these legs to a character and we've run out of insect-based characters in the MOTU line anyway. I don't mind that he has them. Some people do. I only realised after I took all these shots that in every photo I have left Mosquitor's extra legs on display quite noticeably - so I must subconsciously enjoy them on display. 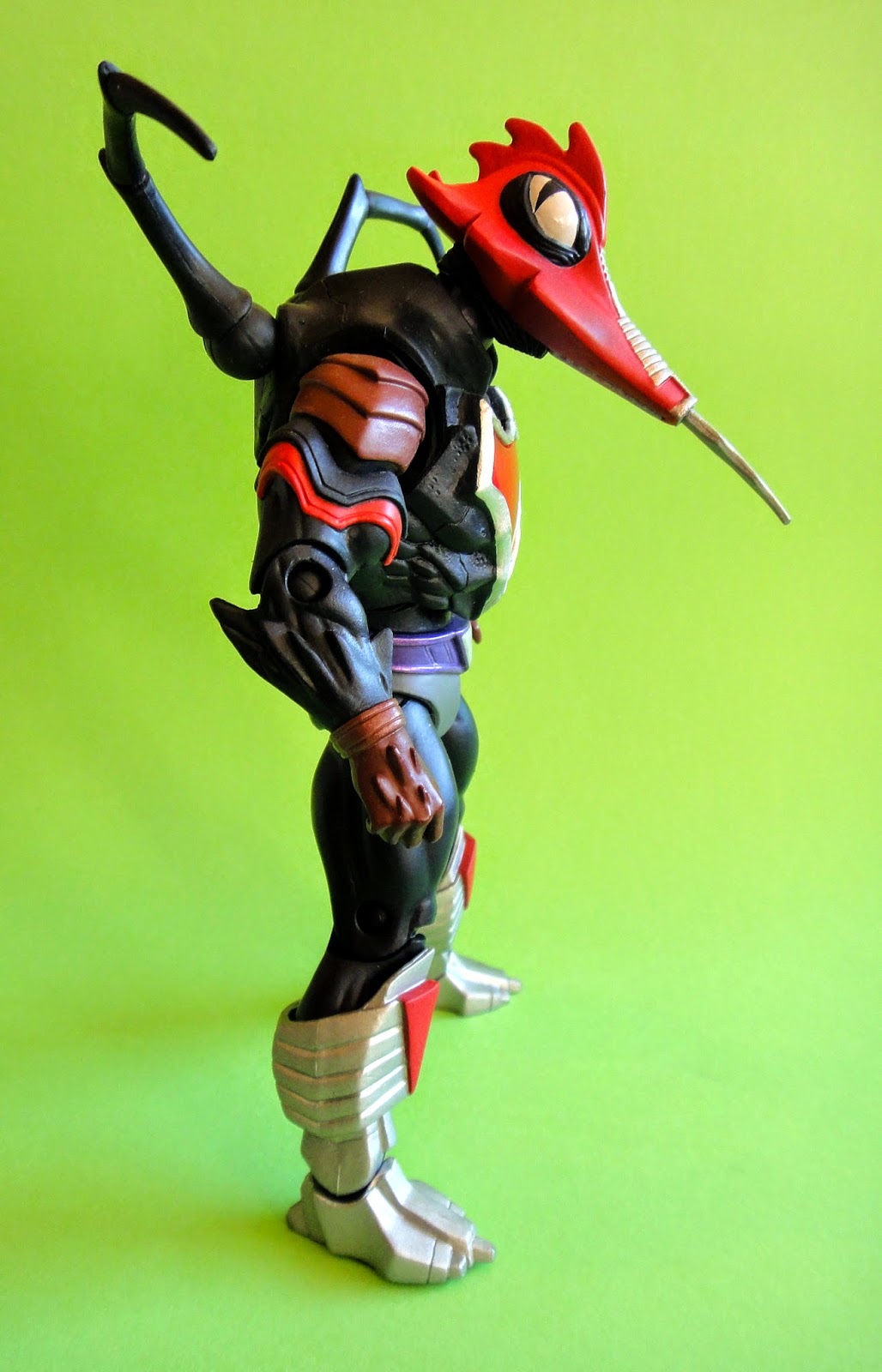 I love the newly sculpted boots for Mosquitor. They look exactly like the vintage figure's boots. Mosquitor's head sculpt is also fantastic. It's about as perfect a rendition of the original Mosquitor's head as you could hope to see in a Classics re-interpretation. Other reviewers have noted that it's very obvious from the detail of the head sculpt that the red portion of Mosquitor's head is definitely supposed to be a mask over his face as opposed to his actual face. Looking at it closely, this really does seem to be what they were going for. His eyes are bulging out of the sides of it and the bottom of his head seemingly fits into the red mask versus being a part of it.

The real kicker is that Mosquitor's proboscis (bet you never thought you'd see that word in a toy review) or stinger is sculpted in such a way that it looks like a separate piece on the underside of his head which really adds to the mask effect. It's like the mask fits over his stinger. Or he's a robot. I like it better if Mosquitor is a Robot Vampire Mosquito. Why can't he be? Snout Spout exists.

As cool as all this head sculpt detail is, it mainly serves to make me wish you could take his mask off.

But you can't, so I'm going to keep pretending that it's his FACE. Alright? 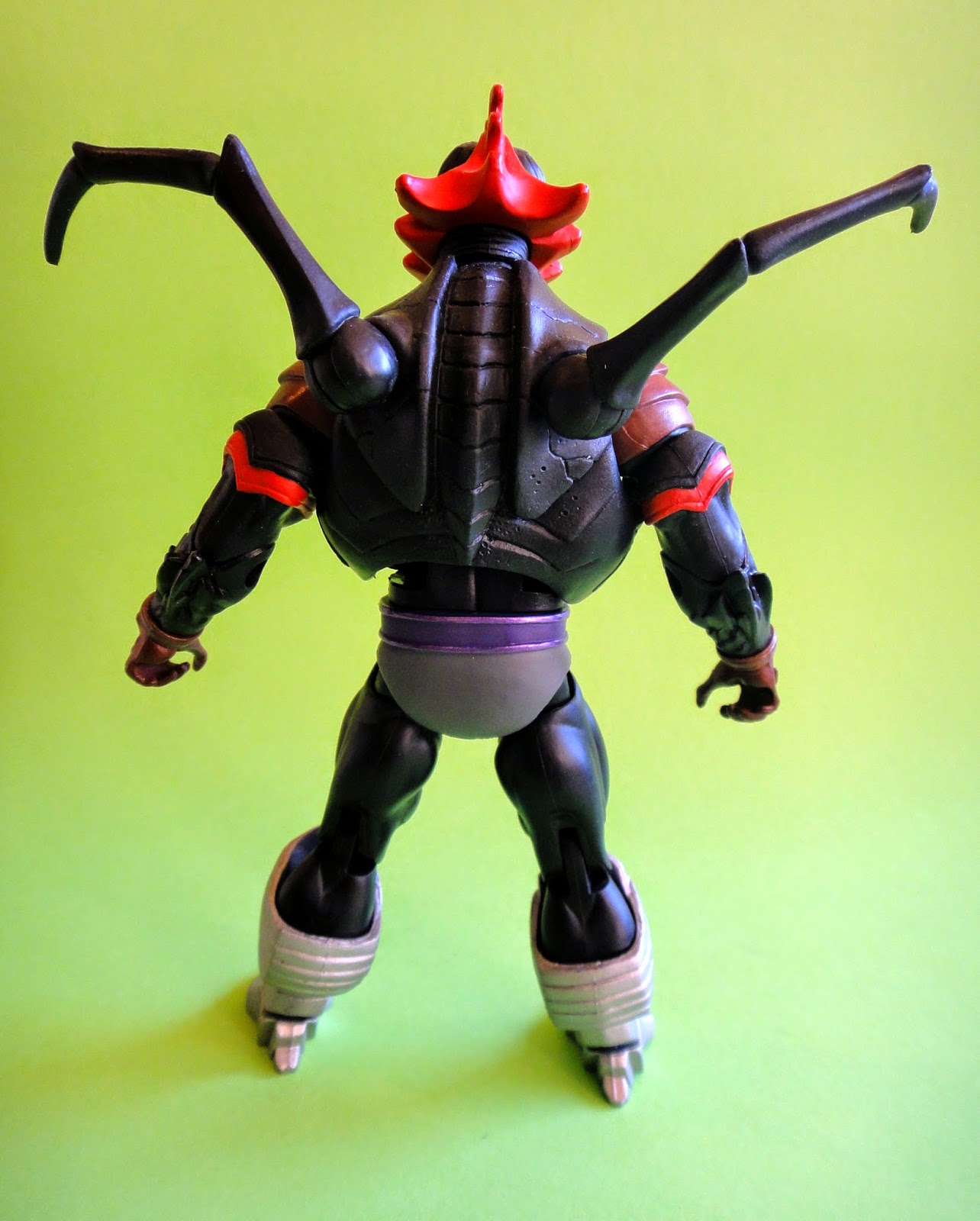 The paint job on Mosquitor is pretty clean and I especially love what they've done with his boots and his belt. The paint work on his belt is a pretty intricate two-tone effect. The silvers they used for his belt triangle and boots are the same and they look great. They also use that silver for his proboscis and the outline to his chest blood piece. It helps to give him some uniformity in his colour scheme and it also stands out and works well with the red, black and brown. With the amount of complaints that reigned in from fans last year over the Black Plastic Debacle - I find it amusing that Mosquitor is a figure made almost ENTIRELY of black plastic. They had to use it up somehow since they weren't allowed to paint over it anymore, I guess.

Now while Mosquitor mostly has the Standard MOTUC Articulation, he is more restricted than other figures in some ways. And this strangely has nothing to do with his armour piece - in fact, his armour is made of a soft rubber and doesn't impede torso movement at all.

But his boots are quite big and you don't quite get the same ease of movement at the top of his boots like most. His brown gloved hands are also made of a very soft rubber (way more pliable than other figure's hands) which limits the wrist articulation A LOT. His head articulation is decent however although he can never actually look down at anything. Well, where his eyeballs are he probably can't anyway.

The real star of the show is Mosquitor's sculpted chest piece. The translucent red plastic they've used is brilliant and it pretty much looks like the original Mosquitor when he was full of blood except way more intricate. It has real depth to it and it almost seems to have bubbles in it not to mention veins, innards and what appears to be an Insectoid pacemaker. This is about as good as you're going to get without them actually re-creating Mosquitor's original action feature. Now, I know MOTUC isn't an "action feature" line but c'mon I just read that Rokkon and Stonedar are still going to be able to turn into rocks! The blood sucking chest action in my vintage Mosquitor still works after 25 years!! Just make the blood feature on the Classics version already!! I'm sure it would have been fine. 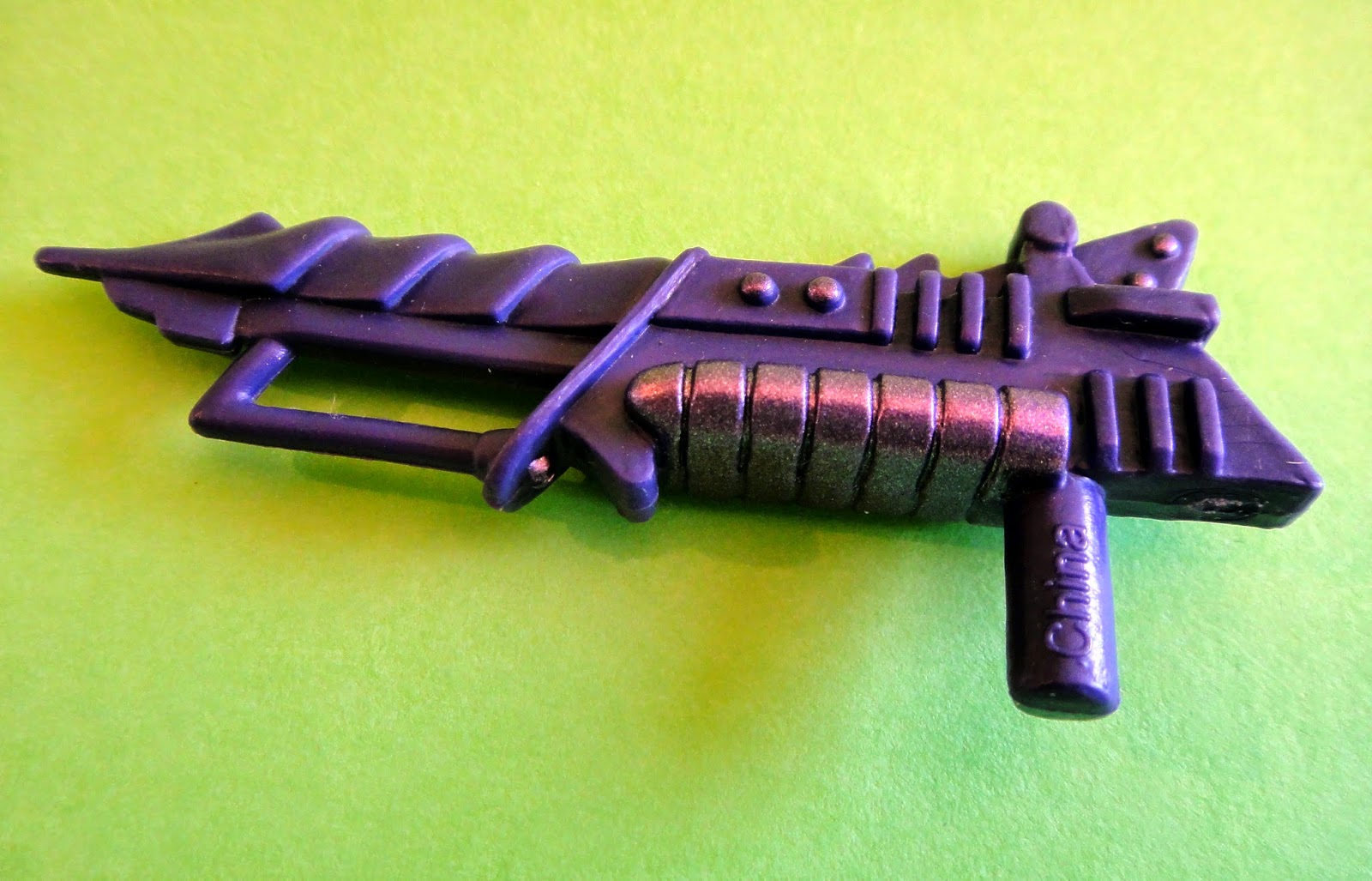 Mosquitor is pretty short on accessories. And by short, I mean he only has one: his awesome purple gun. But with a gun that awesome, it's probably enough.

This gun is the spitting image of his vintage weapon with the added intricacy of two-tone purple paint so it looks like it has some sort of ammunition cartridge. Super cool. I love what they did with the gun. It's the same yet better. This is the strength of the MOTUC re-designs across the line. For the most part they are exactly what you remember except improved in every way. Except for the lack of action features. As if you don't want real Battle Armour? And He-man's head kinda sucks. But I can deal.

As far as quality control issues, there isn't really anything major to speak of. I have heard stories of Mosquitor's head coming loose within the blister pack which is surely a crappy scenario for MOCers. That's probably the biggest initial problem. But to be honest, when I was just playing around with his head before (I was trying to see if I really could take his mask off - you can't) it popped off pretty easily and flew across the room. Out of all of the MOTUC heads I've uh...pulled off, Mosquitors is absolutely one of the loosest. The biggest ongoing issue with the Mosquitor figure is the soft rubber of his nose and hands. While they're okay now, I can't imagine them ageing particularly well with the passage of time.

I'm probably a bit biased because of his affiliation but I have to say that Mosquitor is an outstanding MOTUC figure. He/she looks great on the shelf standing next to just about anybody. He is the only Horde Member that I can think of that doesn't actually have a Horde Symbol which makes him super interchangeable. If you don't already have him, you should immediately buy three. One to open. One for best and one to play with in the bath. 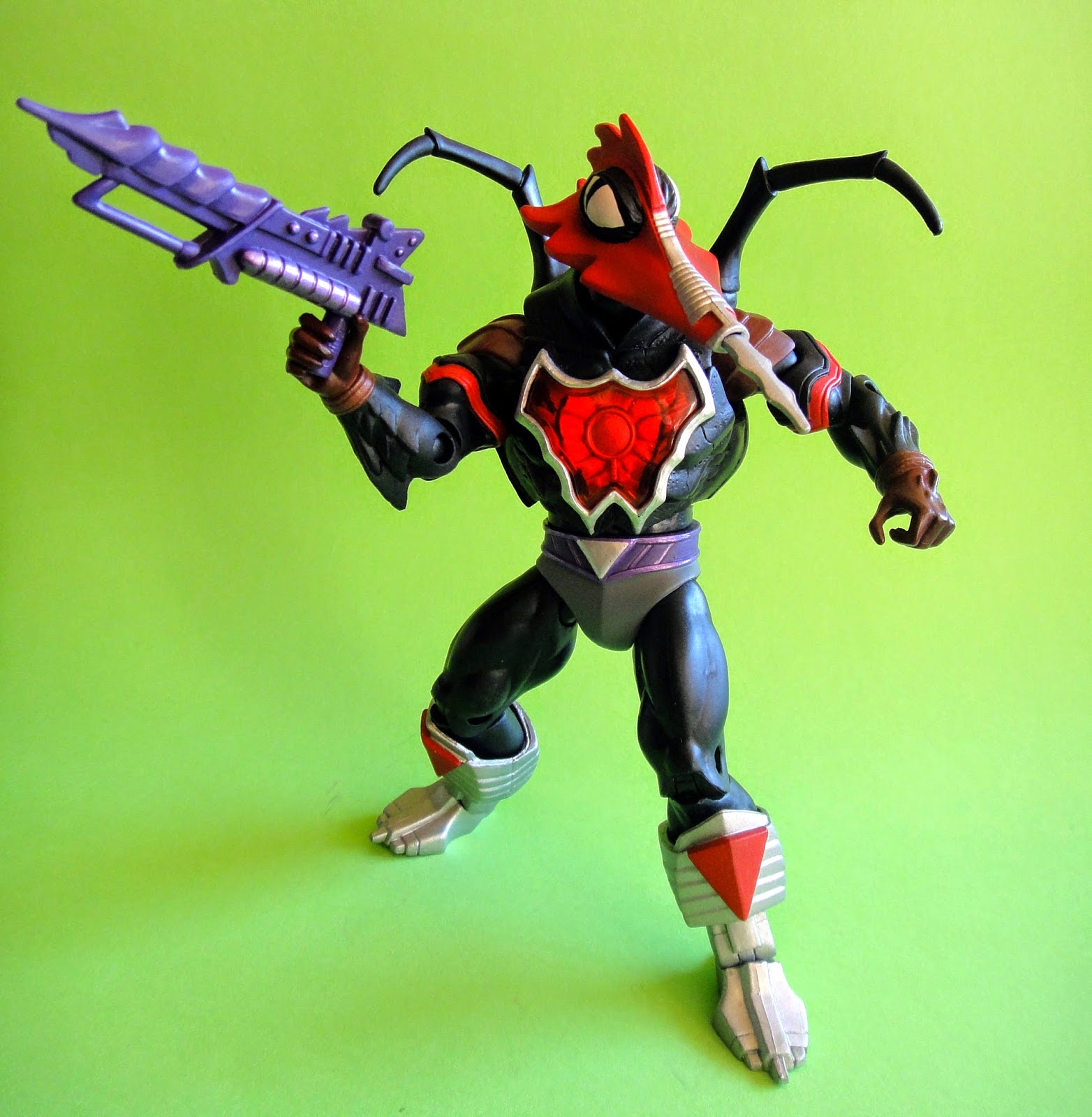