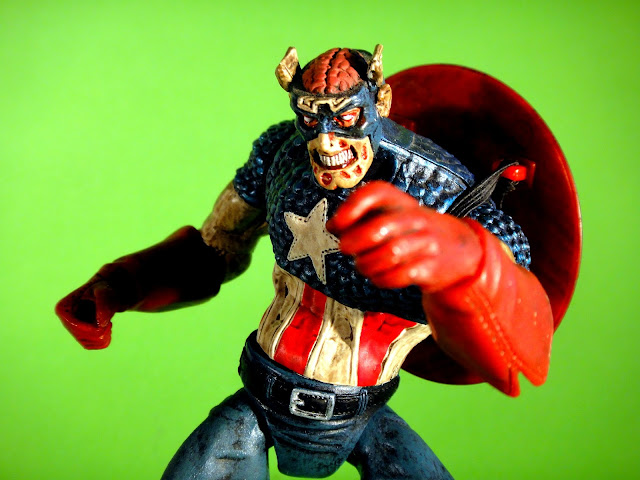 The review included in this blog entry was originally published way back in July 2013 on ThEpicReview.com for their Resident Evil Zombie Celebration Week. It was written specifically for ThEpic Review site so may contain specific references to the site etc. Due to the age of the article, some of the information contained within may have dated somewhat; although this figure came out in 2007 so was already practically a billion years old before it was "reviewed" in 2013. Much like most of us wish George Lucas hadn't, I have also made a handful of changes and edits to this piece; so this is a"Special Edition" if you will. You can check out the originally published version on ThEpic Review's site here.


Some of you may remember Marvel Zombies. It was a Marvel Comic by pre-Walking-Dead-TV-show-Fame Robert Kirkman. I read it when it first came out. I seem to recall liking it quite a bit at the time. Anyway, it got HUGE. It's only looking back at all this that I have actually realised just how long ago Marvel Zombies came out. In my slime-filled brain meats, Marvel Zombies is still recent.

Oh no. Uh-uh. It's not. Not by your human standards. Not really.

Marvel Zombies came out in December 2005. That's almost eight years ago. Wowsers. Have we really been obsessed with zombies again for that long? I mean, Marvel Zombies only existed back then to cash in on how popular zombies were at the time. But even now, the zombie love just doesn't seem to be slowing down, does it? There's a joke about the speed of zombies back there but I'm letting it pass me by.

Anyway, to continue to capitalise on the Marvel Zombies fever, they obviously IMMEDIATELY put into production some action figures. It just goes to show how long it really takes to design, sculpt, tool, manufacture and release an action figure. Because this fella right here? Colonel America? He came out in December 2007. Two years later. 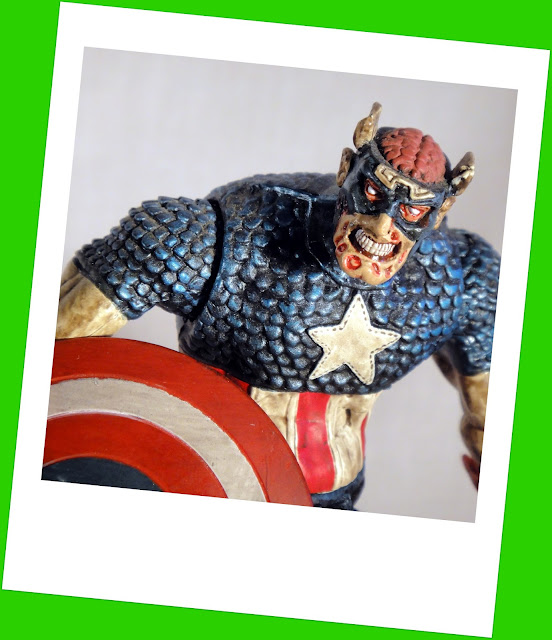 I love the figure. I loved it back then and I still love it now. In fact, after taking these photos, my love for Colonel America only grows.

This has been a fascinating history lesson for me in writing this five-year-late toy review.

For one, I had completely forgotten that his name wasn't Zombie Captain America at all. It was Colonel America. I forget the reason for it now. I'm guessing in the alternate Zombie-verse Cap just gets promoted. I vaguely recall that this version of Cap has also been The President Of The USA. But am I remembering that correctly, or did I read it on Wikipedia? This is starting to get mildly existential. Let's move on.

At any rate, I've been calling him Zombie Cap for years and years now.

Colonel America was one of three Marvel Zombies figures that I knew of. The other two were Zombie Spidey and Zombie Hulk. I never bothered with either of them (even though they were kinda cool) because for me, Zombie Cap was where it was at.

Edit: Since this was written, Zombie Magneto has come out and Zombie Sabretooth is on its way. 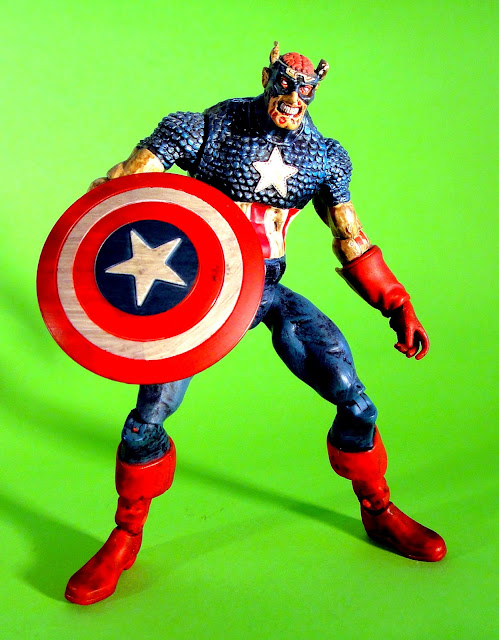 I'll be honest with you: Even compared to the relatively decent articulation levels of 2007, Zombie Cap falls completely flat in that department. But his zombie appearance is so stylised that it absolutely works in the favour of the figure.

Zombie Cap came with a detailed base for him to stand on which was one part of a three part base that joins up with the bases from Zombie Spidey and Zombie Hulk to help create a scene that is littered with body parts of the dead Silver Surfer surrounded by patented Kirby Krackle. Pretty cool really but by itself, not so much. 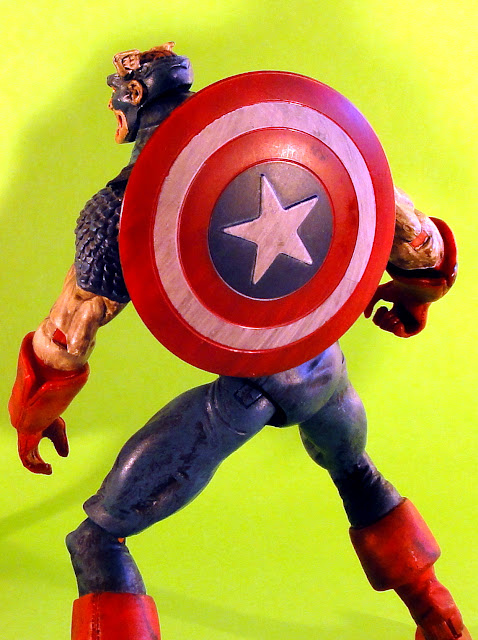 His accessories were his battle worn zombieverse version of his shield and the missing part of his skull. Unfortunately, I misplaced the skull cap that hides his exposed brain meats quite some time ago, so you won't see it in these pics. I haven't lost it per se. But I have moved house two and a half times since I first bought him, and I wouldn't want to be on a game show where the million dollar prize depended on me finding that removable piece of plastic. Edit: I still haven't found that skull cap piece. Sad Face. 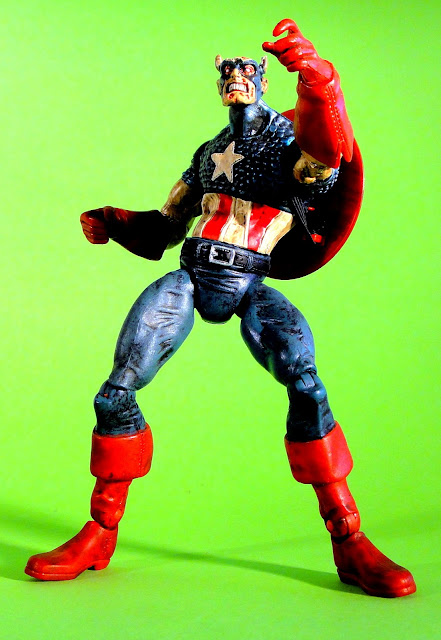 I don't think I've taken Zombie Cap down from display since I bought him almost six years ago. Edit: Since the last house move, he's totally not on display anymore. Waaaah. He's a keeper. It's not just my love for Captain America and Captain America action figures, surely. I think he is independently a decent plastic incarnation of a specific comic book version of a character.

Funnily enough, while googling some basic facts to reacquaint myself with Colonel America, the first thing I found was a review by ThEpic Review's very own Barbecue17 himself! Right here over at Michael Crawford's site. How serendipitous.

If you want to know more about Colonel America, you should really just read that aforementioned review from back in the day. I've been attached to this character, this incarnation and this figure since the start so I'm far too biased to write a critical review.

Barbecue17's review from 2007 seems far more on the money. The only thing that has changed since then, really, is The Money. If you want to source a Colonel America in this current climate, you'll be looking at way more than the outrageous twenty dollars of 2007! As per usual, your best bet is probably Michael eBay. What a rascal he is.

For ThEpic Review's Resident Evil Week, I am also doing Zombieriffic Reviews of the Tarman figure from Return Of The Living Dead and one of the most bizarre Zombie Superman figures I've ever come across. Tell your friends!