I can't believe it's that time of year again. Yet, it is. It's HOARDSMAS. We've covered the day itself at least two times before in 2012 and 2013 as well as Hoardsmas themed articles you may care to read (or re-read) about He-man, Power Lords, Super Powers, Dear Santy Letters and Holiday Listicles.

Despite all this, you'd be surprised at how many letters we get every day asking us about HOARDSMAS.

Predominantly stuff like "What is it?" and "Isn't it just Christmas?" or "How do I celebrate it? I need to know for my lifestyle."

So let me clarify it all for you, right now, once and for all, and for those playing along at home.

HOARDSMAS is about buying material possessions you absolutely don't need and giving them to people you mostly like (and occasionally people you only tolerate), under the guise of a magical creature is the one actually giving it to them. You may NOT take credit for these presents. The magical Hoardo Beast dropped them at your recipient's house for funsies! Don't mess this part up or you'll ruin hopes and dreams.

HOARDSMAS occurs whenever Hoardax can be bothered taking photos of the event. Sometimes this coincidentally lands on your planet's "Christmas Day." Often, not.

HOARDSMAS is about including everybody (regardless of denomination) in something most people can bond over: Alcoholism and Consumerism. If done correctly it can be a fun time for all.

I may or may not be drinking Egg Nog as I write this.

But don't forget the most important aspect of HOARDSMAS!

After the magical Hoardo Beast gives you your material possessions, you have to briefly look at your new gifts with unbridled awe and a sense of satisfaction, before putting them in a box and not looking at them again for years.

Do this for long enough and you too can have an area in your very own headquarters that gives you anxiety when you walk in there.


This year, we're not going to focus on the the eccentricities of Hoard World's celebration of Hoardsmas but on the material possession exchanging itself.

For this year was quite a, how you say, doozy.

This year, I commissioned Huggingtons Twisted Toys, whom you might remember from the following spotlights: Frankentrooper (pictured in opening pic to the far right) and Savage Bobby Pin or the Krang Amazeballs (pictured in the bottom left hand corner of the opening pic) sneak preview a little while back, to make me a special present for one of my best pals: Mr. Eric Gibeau.

Eric and I go way back, back to the very early days of Hoard World - in fact, before it even began if my brain meats serve me well. He's been around since the very beginning, offering helpful advice and generously donating plastic strangeness that he himself has hoarded over the years, and I have exchanged similar things in return. It's been good times.

This year, however, Eric raised the bar by sending me a package that said "Do Not Open Until December 25" about three months ago! Oh, the temptation! Yet, I held my ground.

However, having an inkling of what it might be from some of the free stickers that were included unwrapped with the wrapped parcel, I knew that I would have to lift my game when I returned the favour.

Long story short: Eric sent me 8-Bit Zombie's THRASHOR - an indie toy item I had long had my eyestalks on.

Knowing Eric's un-Cromly obsession with Skippy The Bush Kangaroo yet there being a lack of available Skippy based Toys to choose from, I got local toy artist Huggingtons Twisted Toys to make something from scratch! Given a spark of an idea but mostly free reign, Huggingtons chief ingénue J-F Tranquille came up with: S.K.I.P. - Strategic Kangaroo Impact Patrol.


As you can see, J-F did an amazing job on S.K.I.P. - so amazing that he actually created two versions! 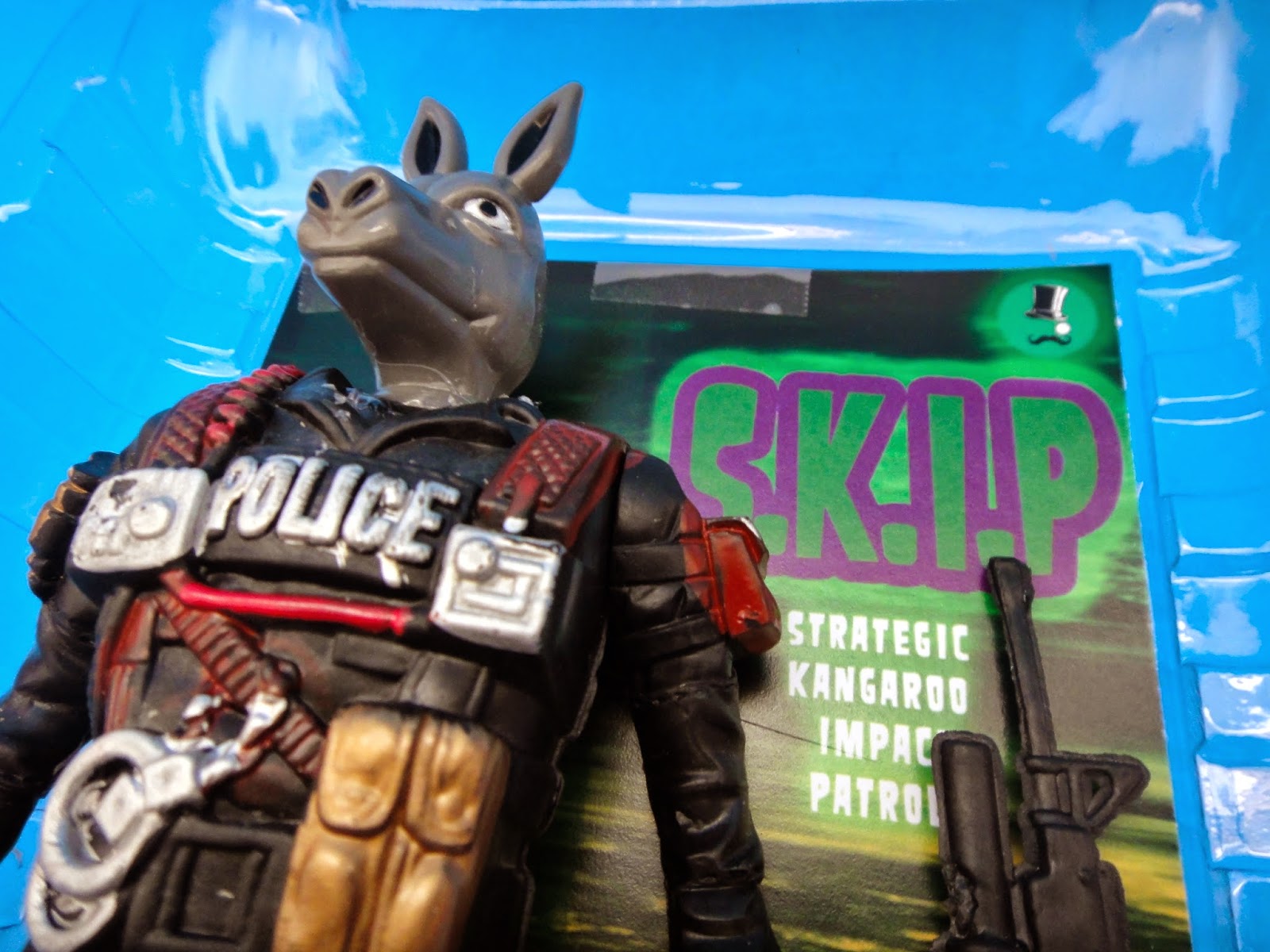 I am writing this final edition of Hoard World for 2014 before I know what Eric thinks of his presents but I'm sure he will love them. I know that I love THRASHOR and am very grateful for Eric's generous friendship over the years. Special thanks also to Huggingtons Twisted Toys for being awesome.

Here's a bunch more pics of both THRASHOR and the S.K.I.P.'s hanging out on Hoard World. 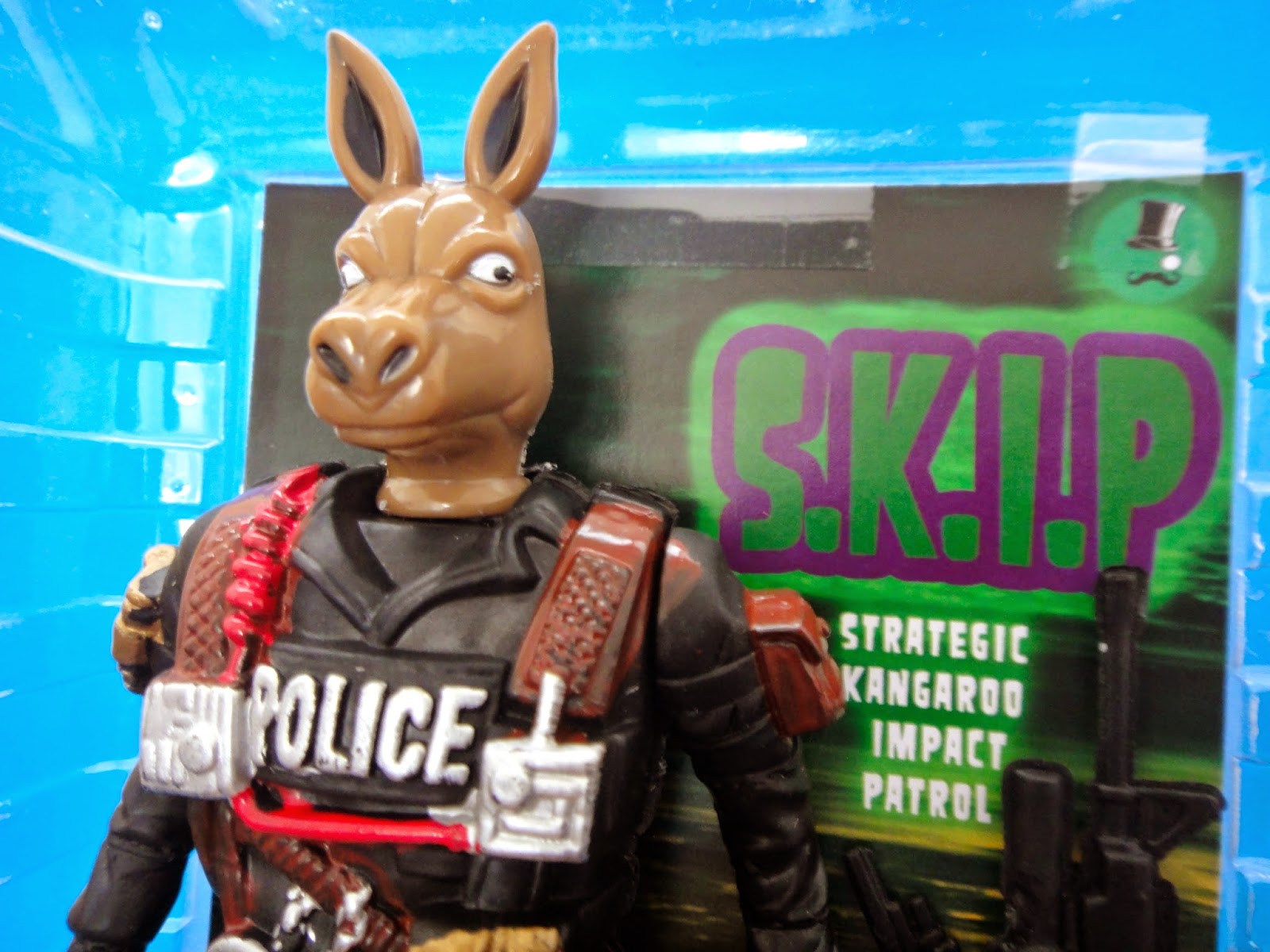 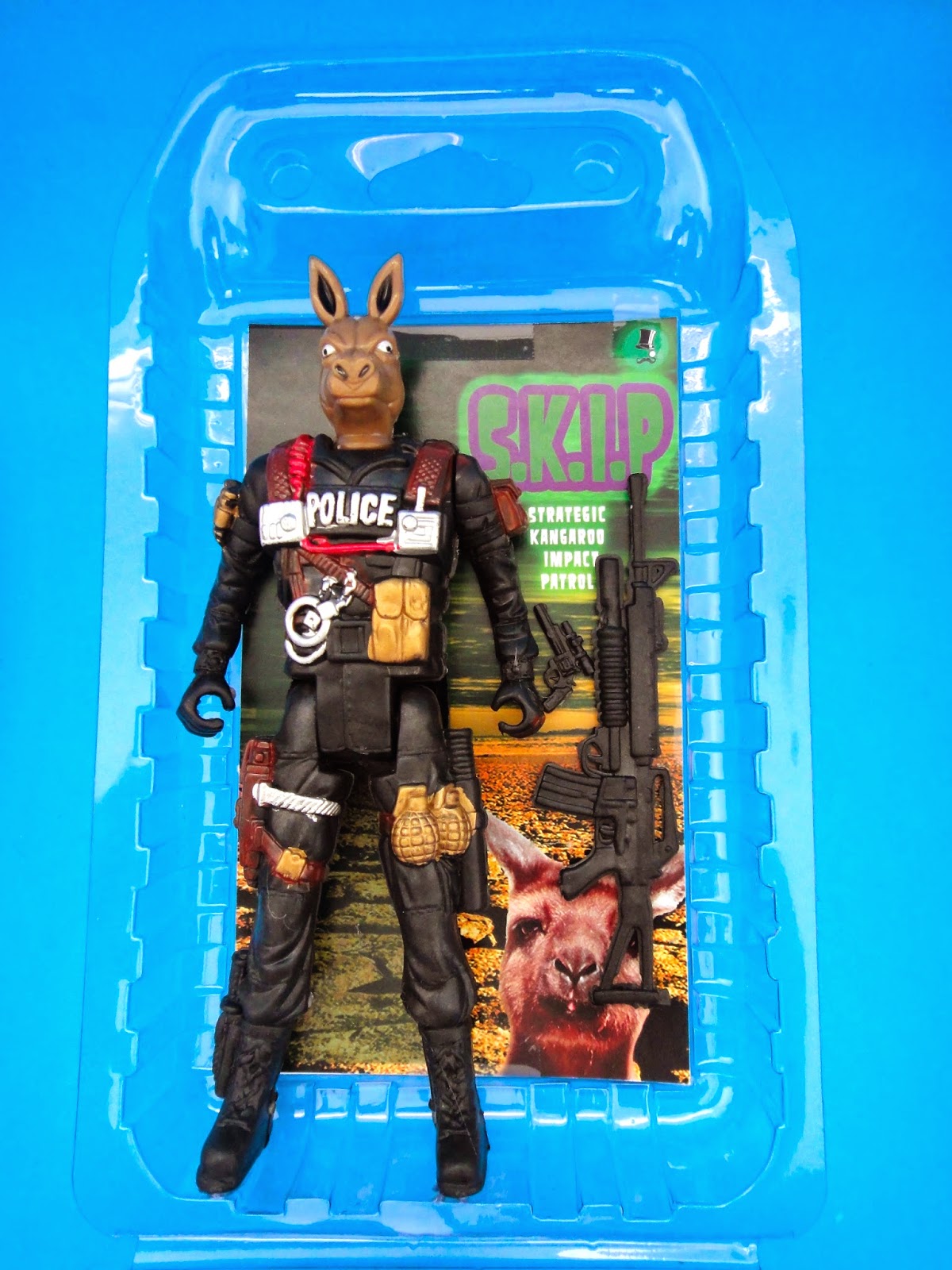 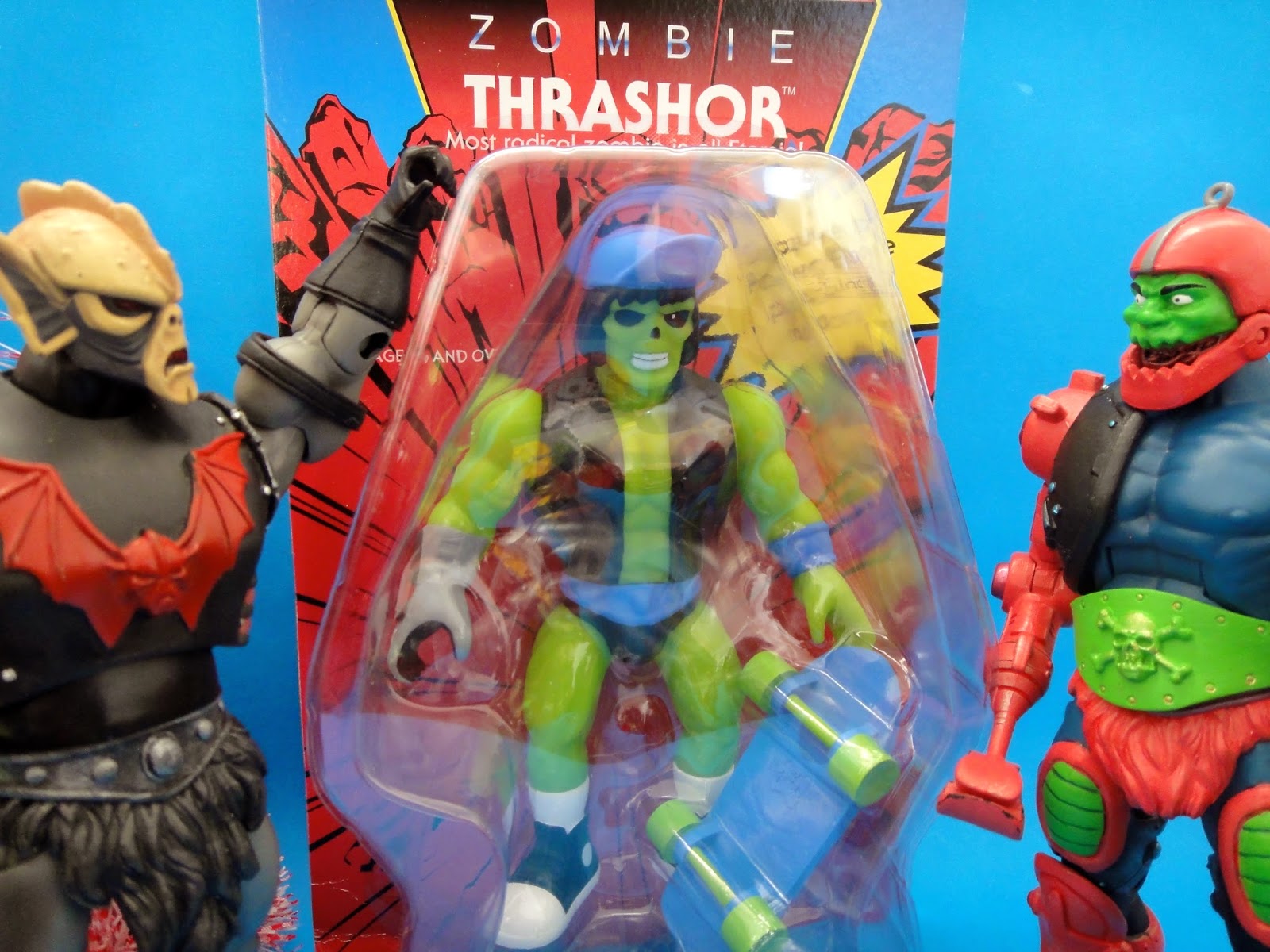 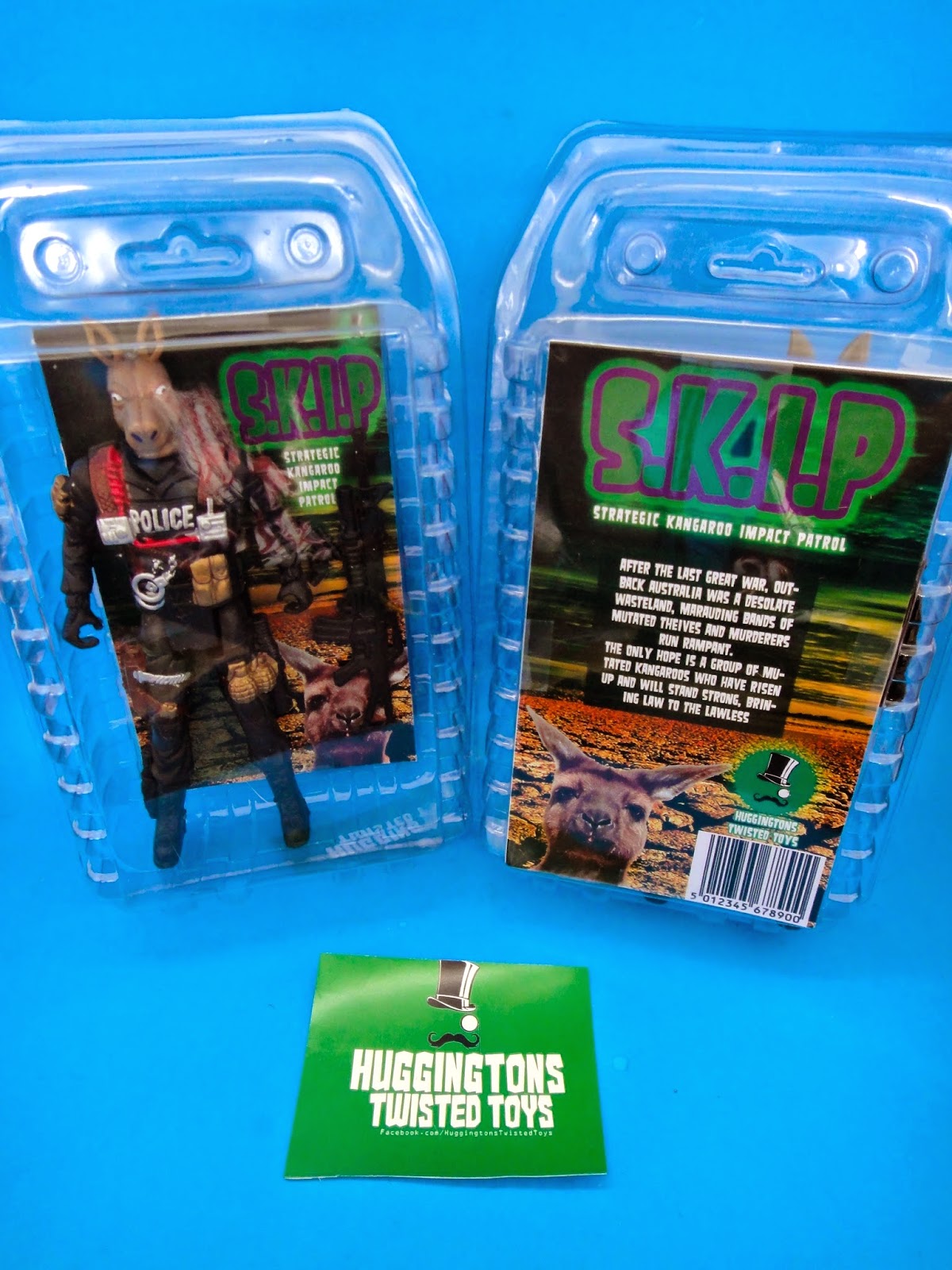 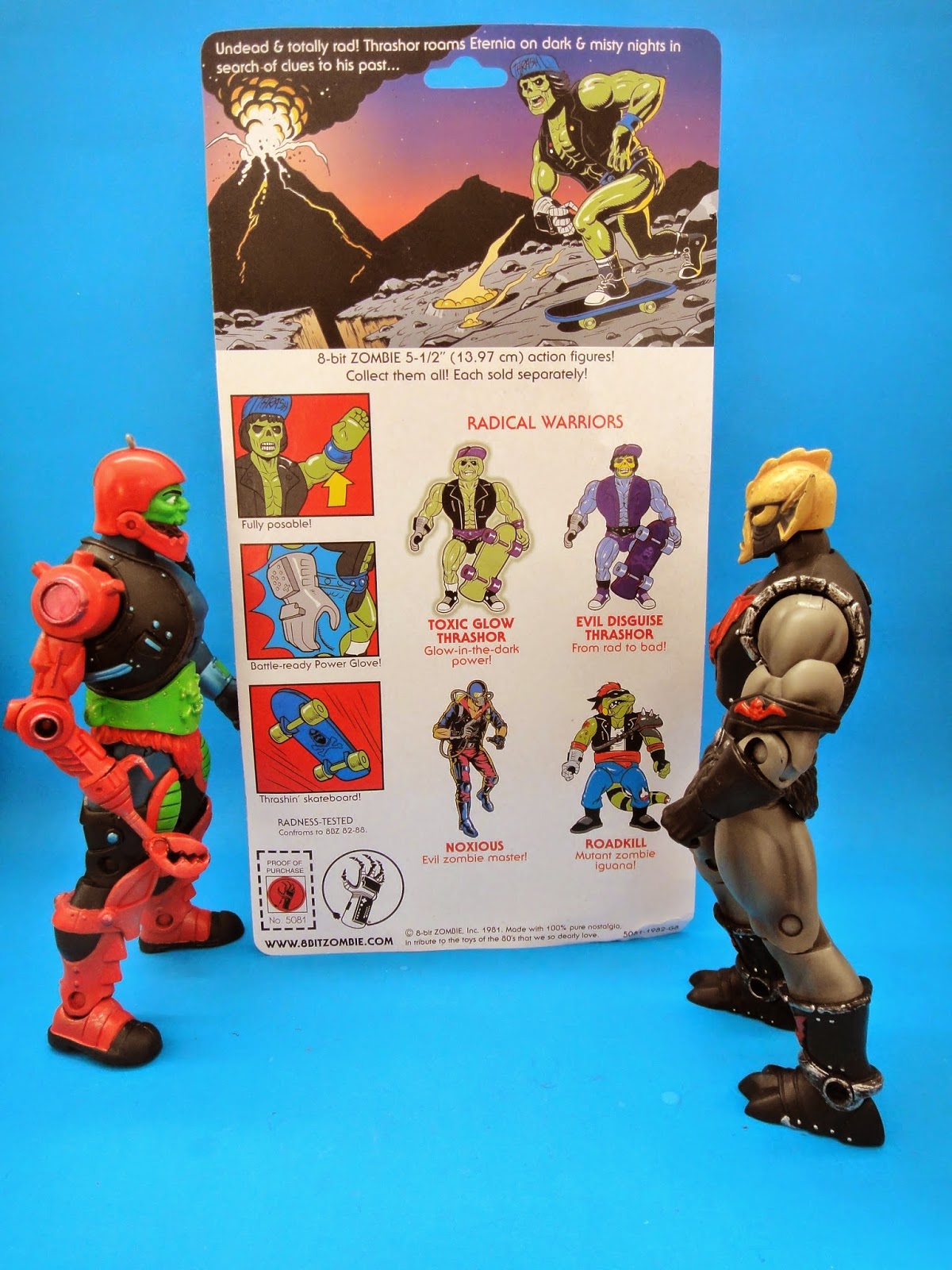 Just remember, Hoardsmas or whatever you are celebrating is about giving.* As a direct result, it's also about hoarding. But this is Hoard World - so it's a safe space to do that.

See you all again in 2015 for more Hoard World!

*But not taking credit for the present, obviously. Naturally neither I nor Mr. Eric Gibeau can actually thank each other for Thrashor or S.K.I.P. because it was the magical Hoardo Beast that gifted them to both of us!