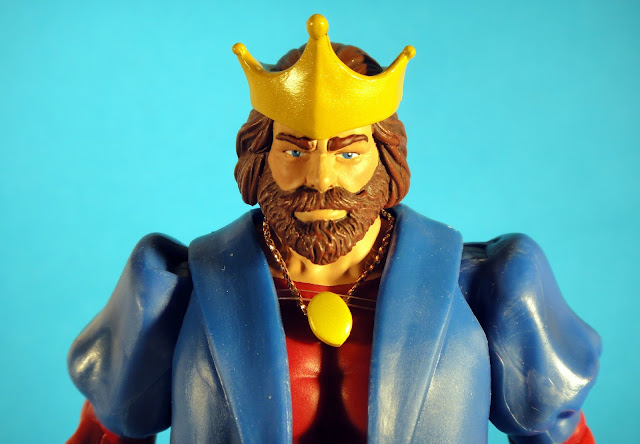 The review included in this blog entry was originally published way back in June 2013 on Poeghostal.com. It was written specifically for Poe Ghostal's site so may contain specific references to the site etc. Due to the age of the article, some of the information contained within may have dated somewhat. For posterity (in case Poe's site ever goes offline forever) I have included screenshots at the end of the article of a selection of the 20+ comments I received for this guest review; to date, still a comments record for anything I've written. Booooooo. You can check out the originally published version on Poe Ghostal's site here.


In November of 2012, Mattycollector released another (surprise surprise) variant figure of a character we've already had in the Masters Of The Universe Classics toy line. Lo and behold, It was the "Eternos Palace King Randor", which, roughly translated means "The-Filmation-Cartoon-Version-That-You-Always-Kinda-Wanted-As-A-Kid-But-Also-Didn't-Really-Need King Randor."

For many MOTU fans, this was a long-anticipated dream come true. 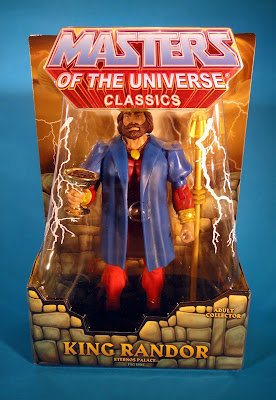 You might remember King Randor. He's Prince Adam's dad. He spent about 97% of his time in the original He-man & The Masters Of The Universe Filmation cartoon SITTING DOWN on his throne. To me, he always came across as a bit of a royal buffoon who, when he wasn't sitting down, was only there to scold Adam or throw his head back and laugh at Orko's hijinx while sitting down.

I always thought Queen Marlena was way cooler than King Randor in the Filmation cartoon.

She often came across as being:


AND (this was the best part) Queen Marlena was a former astronaut from our very own planet Earth. I wonder if she went to Astronaut School with John Blackstar? Now, there's a Filmation cross-over I'd like to see.

Meanwhile, King Randor wore orange tights, little blue bootsies and constantly sipped a (most likely) alcoholic beverage from a goblet while sitting down on his throne all the time.

By comparison, the way the character of King Randor was handled in the 200x animated series was actually pretty good. He was a no-nonsense, barbarian-warrior style of King who lead his men heroically into battle. Whenever I watch that first episode of the 200x Masters Of The Universe cartoon, I often think I'd have rather watched a show just about Captain Randor and his men fighting Keldor and his rogues. We don't really need anything else to happen. It's far more compelling. The second that Keldor becomes Skeletor and Prince Adam turns up, I kinda stop caring. I know that sounds odd.

Let's hope they make a 200x King Randor at some point in the Classics line.

I should mention that, as you can plainly see in the photo, King Randor comes in the exact same packaging that we’ve seen before from MOTUC, time and time again. He is packaged holding his infamous goblet full of booze. I have it on good authority that Randor's wine is made up of only the finest Eternian Grapes and crushed Gooble Eggs. Or maybe I just made that up. You decide! 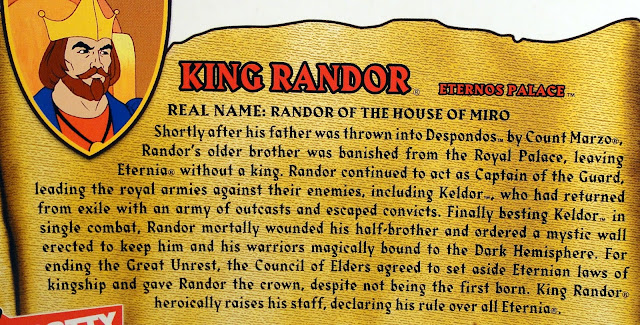 King Randor's bio is pretty inoffensive as far as MOTUC Bio's go. It doesn't give him any new ridiculous name that adds nothing to the character like KREANN’OT N’NOROSH or Gur’rull Gu’rrooowarrrk or Raqquill Rqazz (what? Racquel Welch?) and it doesn't explain an awful future plot point like the completely preventable death of Man-at-Arms as a SNAKEMAN at the hands of Clamp Champ. Don't get me started on this. But while I'm here, where's Duncan's moustache go when he becomes a Snakeman? Where? WHERE? Ridiculous.

No, King Randor's bio is a pretty standard, modern MOTUcanonical bio. It is interesting to note however, that the bio, while essentially telling the exact same origin, is written completely differently from the vintage-style MOTUC King Randor bio. 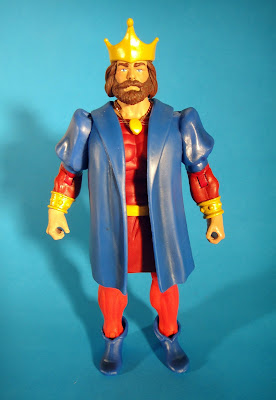 King Randor has the standard MOTUC torso and the same head sculpt as the original Classics Randor. He also has 3/4 of the legs that have previously been seen on Fearless Photog. The Photog Leg Likeness ends at Randor's comfy shoesies. I'm assuming Randor's blue bootsies are new sculpts because, unless there's been a Dark Knight Returns MOTUC-style Robin and I missed it, nobody else in the Motuverse wears slippers like these. Only the King of Eternia could be so bold. 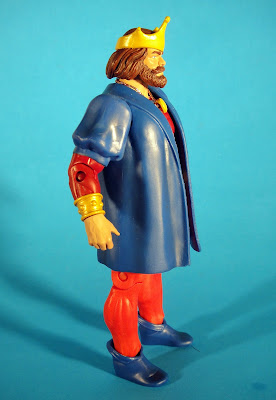 Randor has a tunic that is non-removable in much the same way as Dekker's restrictive tunic. Randor does have a soft plastic, sculpted blue coat that you can remove if you want to, but it's ultimately pointless to do that because his newly sculpted blue puffy arms remain long after his coat is gone - which would just look silly.

This is mostly okay however, because the whole reason you'd have this Randor is to have him looking exactly the way that he does. Even if you could choose to take his coat off, you probably wouldn't anyway.

The paint applications on this figure overall are okay. In contrast to the gold crown of the first Classics Randor they've used a lighter, less gold and more yellowy paint, obviously to fit in with the Filmation colours. That same yellow matches up pretty nicely with his yellow belt and yellow wrist bracelets. On my figure, the yellow paint of the crown bleeds into his brown hair at the top of his head. You can look past that for the most part but far worse on this figure is where the blue of his puffy arms has been unevenly painted over the red of his forearms. You won't notice it from a distance but close up, it looks particularly sloppy.

The aforementioned paint issues are a definite quality control concern for this figure. I'd be curious to see how much better or worse it is on other Filmation Randor figures. 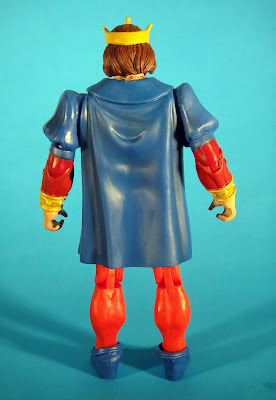 Unlike many other Classics figures, articulation is not as much of a feature with this King Randor. In fact, I'm hard pressed to think of a MOTUC figure with less articulation that isn't the Cringer that came with Queen Marlena. And he was more of a cute prop than a bonafide figure.

And that's a little bit what this King Randor is. A cute prop that was made to resemble his cartoon counterpart and that's about it. It's a pretty static action figure, particularly for the Classics line. Sure, he has regular head and wrist articulation but his arms have no bicep swivel joints. Adding insult to injury, his coat restricts the freedom of his abdominal movement and then there's that super restrictive non-removable tunic.

See, I can deal with Dekker's tunic. I could even deal with She-ra's skirt (well, at least until SWIFT WIND but they sorted that out with Bubble Power....was that their plan all along?).

But King Randor's tunic is a real let down. And you know why, right?

Because King Randor, especially this Filmation incarnation, predominantly SITS DOWN ALL THE TIME. What kind of Filmation King Randor figure can't sit upon his throne?

Randor's restrictive tunic means that he can't sit down. Like, at all.

King Randor is supposed to do THIS. I've taken pains early on in this piece to irrevocably establish that this is 97% of what Filmation King Randor ever actually does.

I'm sorry but I don't think I can move past this massive oversight.

Let's all calm down together by taking a look at Randor's accessories. 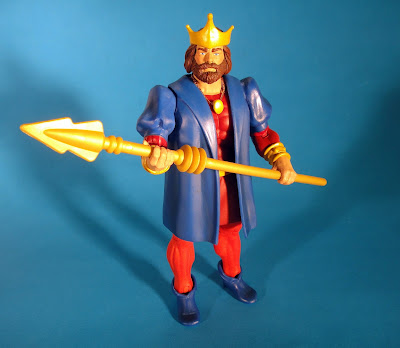 Filmation King Randor has the same spear (albeit a different colour) that his original counterpart did and in turn, Whiplash originally had. It's perfectly fine.

King Randor also has a horrible necklace that is cartoon accurate but annoying if you remove the clear plastic band that holds it in place initially. If you haven't already removed that plastic tie, I would suggest leaving it on. His necklace rarely sits properly without it. A minor quibble at best.........compared to that tunic. The one that makes it so he can't sit down ever.

The best accessory, and arguably one of the best accessories that MOTUC has ever had is the vac-metal goblet with Red Gooble Juice in it. It's a really nice piece of work and a brilliant prop. Unfortunately a fantastic prop goblet that was made to be held by a King Randor that is more prop than action figure. 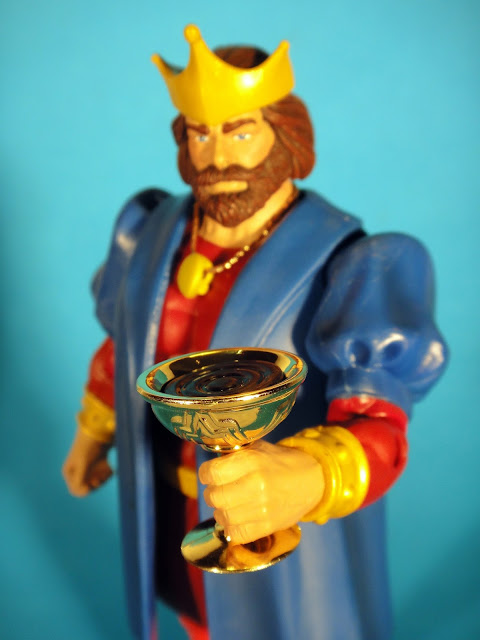 I love Filmation. I do. I was ecstatic when Mattel picked up the license and I'm looking forward to the upcoming Filmation Sub. However, I could've used a Filmation Hordak or any one of the countless other Filmation characters that have never existed in action figure form before King Randor.

Despite that, I would still like a Filmation King Randor - I totally understand that he has an iconic look in the cartoon that was never replicated in his original figure. And I was prepared to come to that party.

But do we need two Randor Figures? I firmly believe that Randor should have been done as an SDCC exclusive just like Marlena with alternate costumes. One figure that you can change from Vintage to Filmation to 200x. Maybe that's crazy. Maybe that's AWESOME.

Failing that, I at least want a Filmation King Randor that can SIT ON HIS THRONE.

If you're someone who doesn't care about his sitting abilities, he's still a decent, toon accurate representation of the cartoon character that'll look good on your shelf in a limited variety of poses. 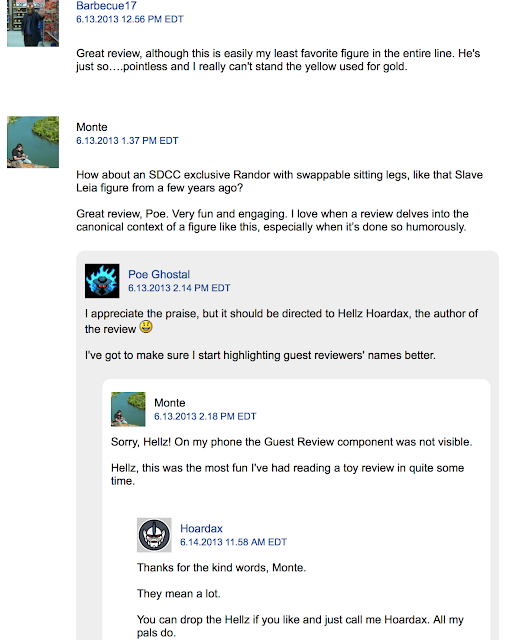 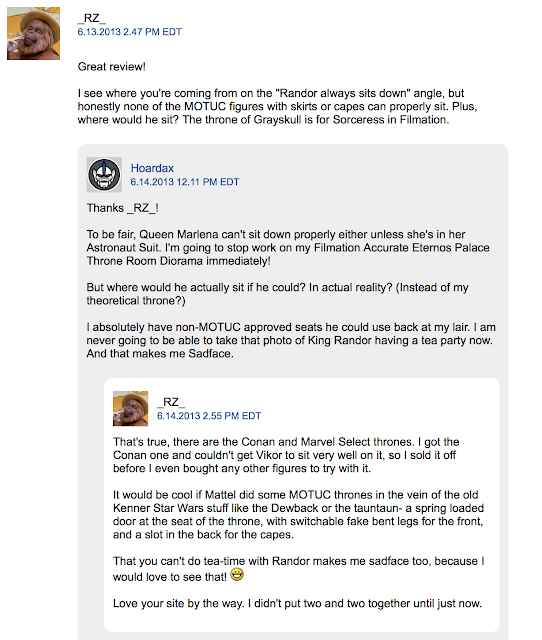 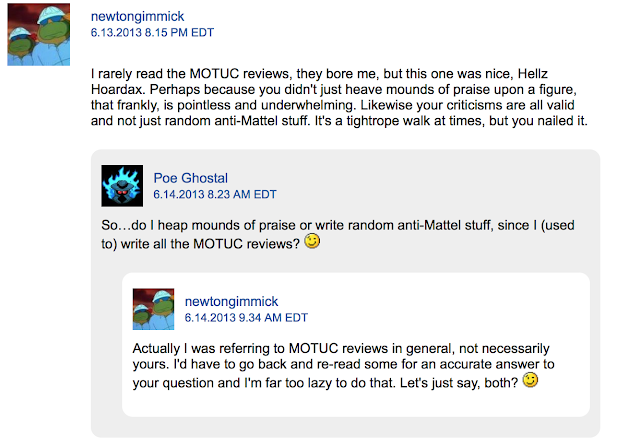 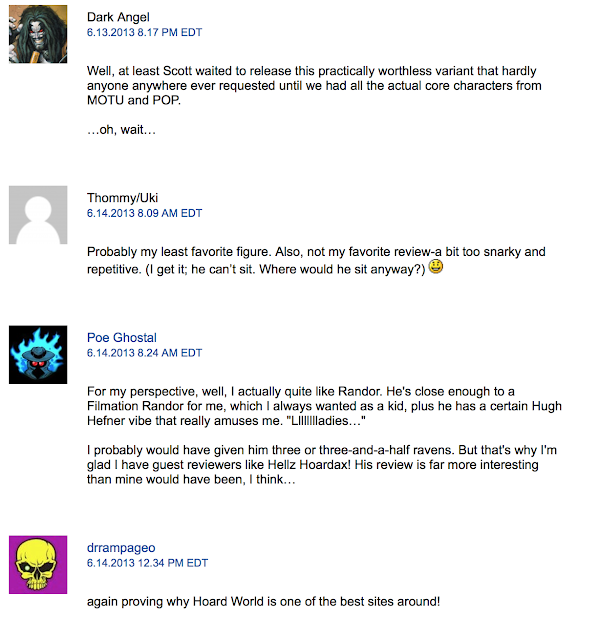