MASTERS OF THE UNIVERSE DAY!


I bet you've been crossing off dates on your wall calendar, counting down the sleeps and waiting feverishly in anticipation while looking at a clock. I bet you thought the day would never arrive. Well, it finally has and that time is NOW.

It's Masters Of The Universe Day!

I know there's three or four of you out there that are wondering what MOTU Day is? That's ok. Don't be alarmed, embarrassed or even ashamed of yourself. We're all friends here. Theoretically.

MOTU Day is April 28th or so it was decreed back in 1987 by Los Angeles Mayor Tom Bradley. He might not have meant for anybody to celebrate it in 1988 or ever again, but it's still an absolute fact. This actually happened. It doesn't matter that it was created for the sole purpose of promoting the POWER TOUR that was running through LA at the time - if it was good enough for Mayor Tom Bradley and the fine people of Los Angeles, it's good enough for you.  MOTU has an actual day. (See: Los Angeles Times Article April 23rd, 1987 to read it transcribed in print)

But what are you supposed to do on Masters Of The Universe Day?

I guess that's up to you.


There were some people out there who did the only thing any right-minded MOTU FAN could summon up the energy to do. They BLOGGED. Oh, how they blogged. They blogged the Stinkor out of it.

History would forever remember them from that day forth as
The Magnificent Seven
...people what done blogs about MOTU on April 28th 2013 and stuff.

Each site has special MOTU surprises for all those playing along at home. It's a veritable treasure trove of content you will almost definitely enjoy:

ItsAllTrue.net talk about He-man. All of the He-man. It's quite good. You should read it after you read this. The fine folk at DoomKick (who had the bright idea of reviving MOTU Day for the people and spearheaded this cross-over) have done not ONE but three MOTUC reviews covering Skeletor, Battle Armor Skeletor and Snake Face (whom I still haven't received in the mail yet because I live off-planet). Preternia give Fang Man a going over with some fantastic pics. Battlegrip has more MOTU-related content than you can poke a Power Sword at and The Epic Review takes a walk down memory lane with their Top 5 MOTU-related memories! I also have it on good authority that the infamous Poe Ghostal is taking a long, hard look at Jitsu.

But what about lil' ol' me?


I took it upon myself to embark on some investigative journalism and find out how some of The Masters Of The Universe actually spent today. It's become a public holiday over there on Eternia so many of them took the day off their regular job of Mastering The Universe to have some down time. 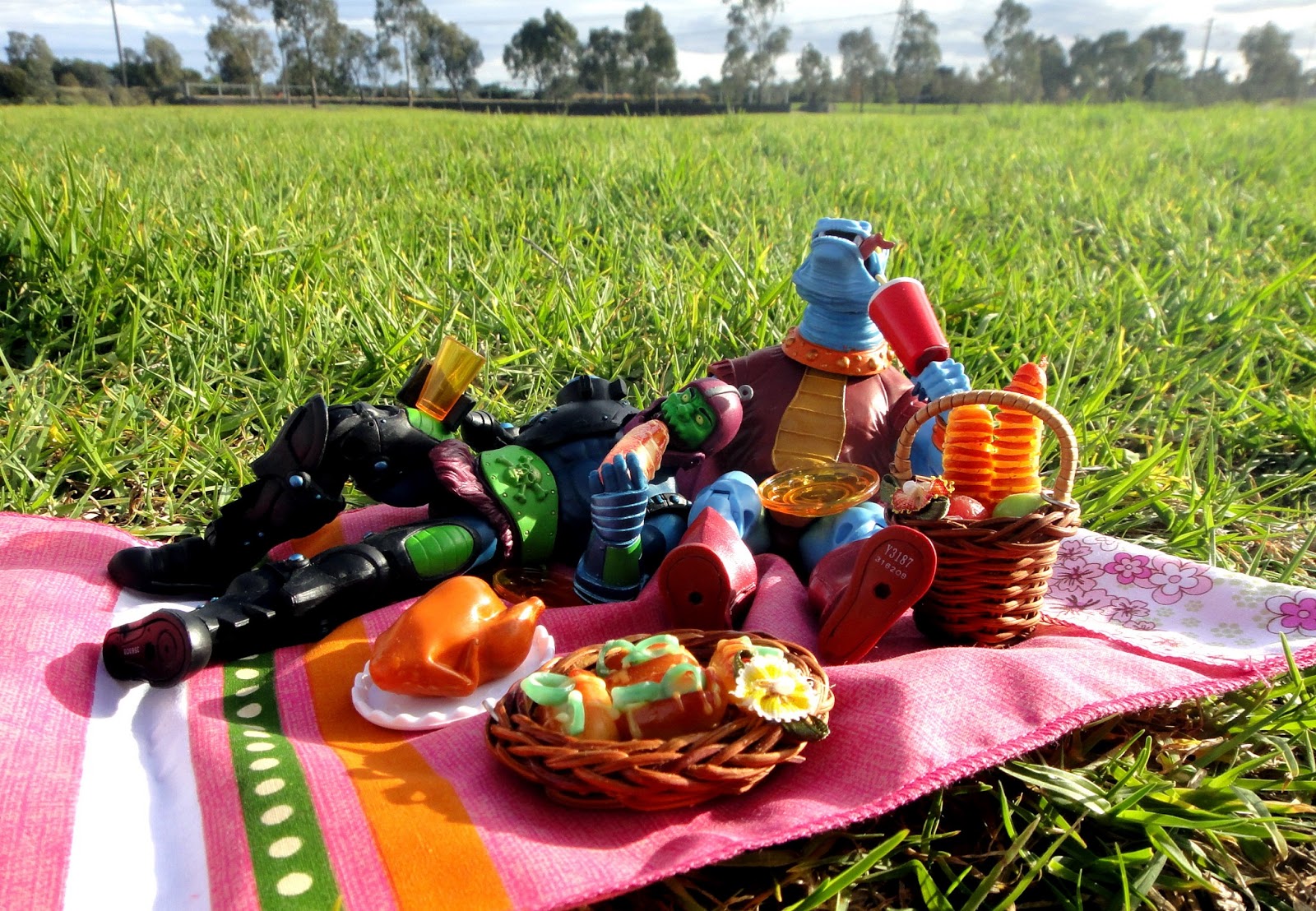 Trap Jaw and Fang Man had a wonderful picnic together.

Great minds must think alike because it was only just the other day that Catra and Chief Carnivus also had a nice, albeit slightly more romantic picnic which was captured by paparazzi and posted over on Hunter Knight's Facey B.

I now know what the producers of Deep Impact felt like when Armageddon was announced. Or vice versa. Sometimes The Zeitgeist is not your friend.


King He-man and Ram Man love to play a bit of Eternian Football on MOTU Day. 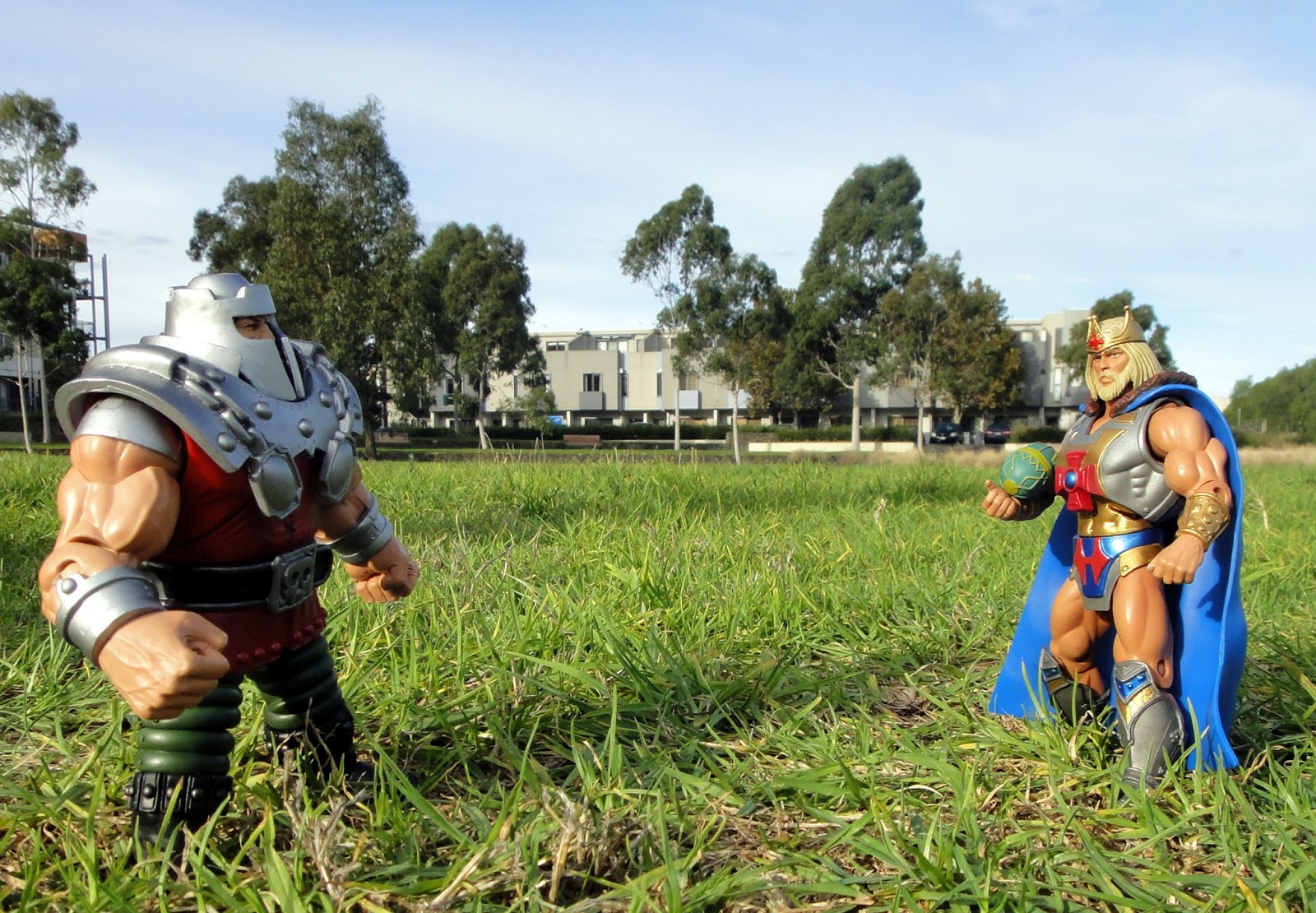 You might notice that an Eternian Football looks spookily similar to the green egg from the major motion picture Flash Gordon. Ram Man and King He-man both had no comment when questioned about the uncanny resemblance.

Not a lot of people know this about Jitsu but he loves to rock climb. Why do you think he carries his equipment around with him ALWAYS. What? You thought those orange things strapped to his back were weapons? Oh no. If you thought that, you would be wrong Sir/Madam! 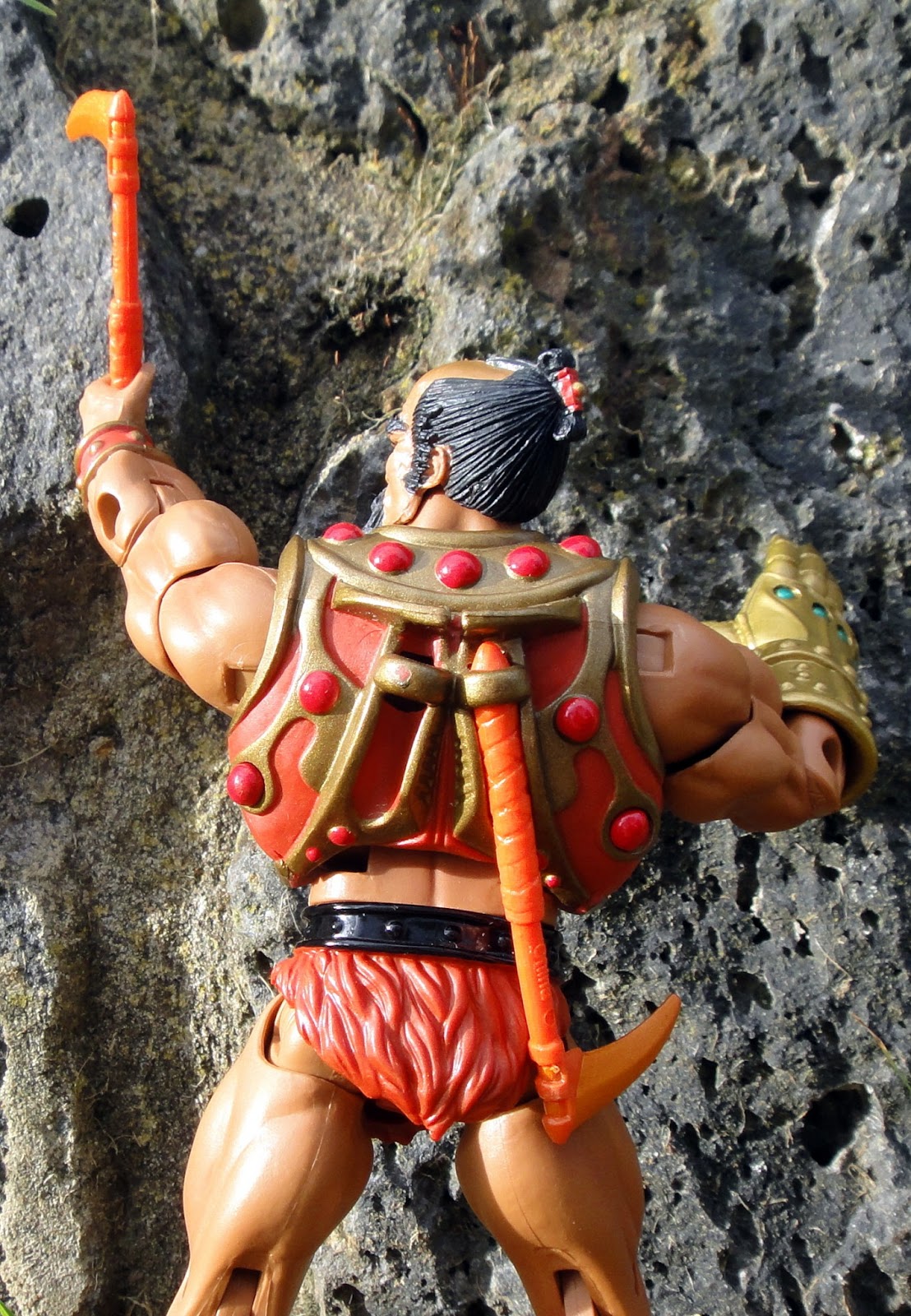 Jitsu is all about the rock climbing. He spent all of MOTU Day doing it. He's particularly slow at it. I didn't stick around to see if he made it or not. He should stick to just chopping things with his over-sized hand and growing facial hair. Or going to sports matches and not needing his own giant foam finger. 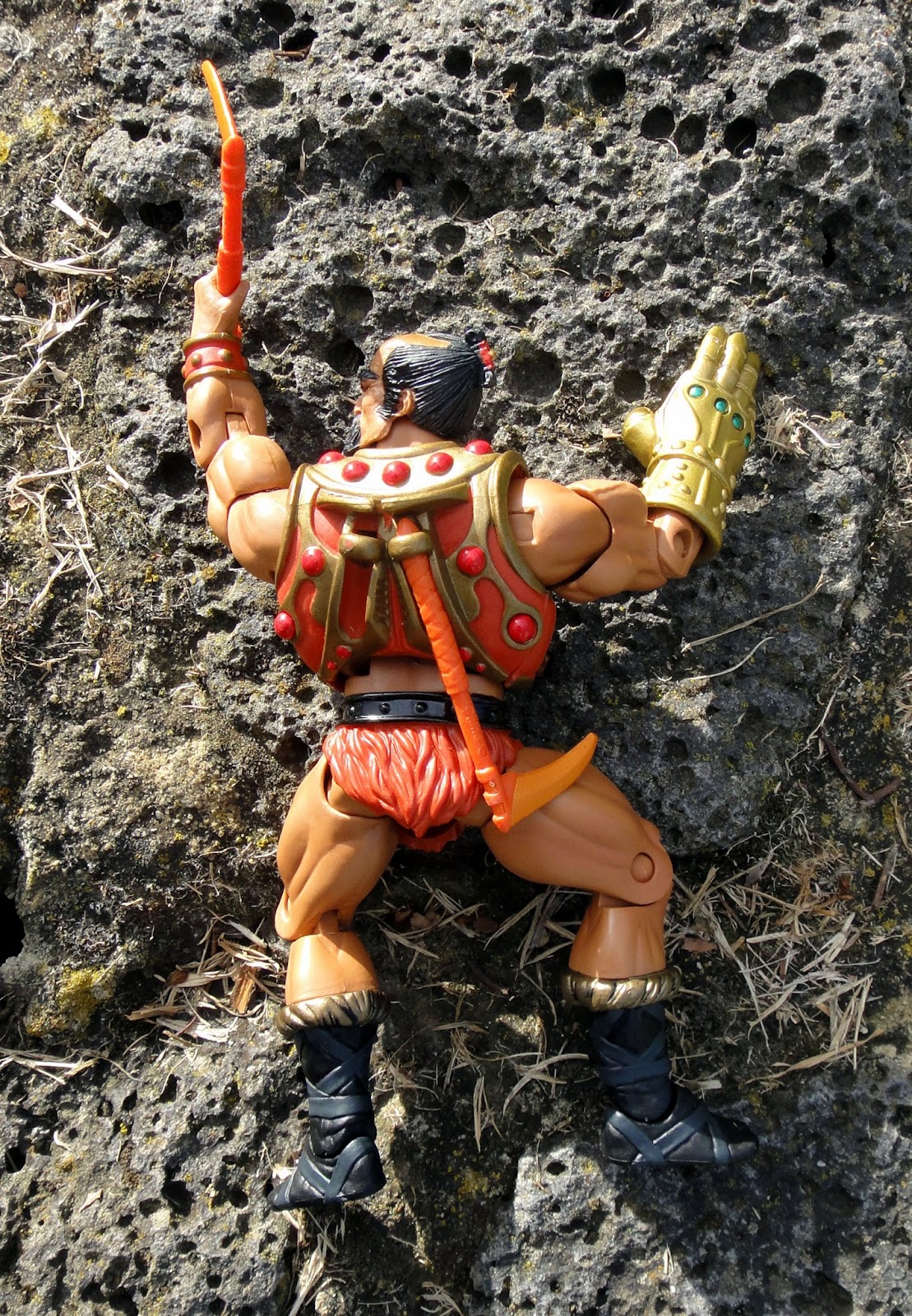 It wasn't all outdoor living and physical activity however. Zodac and Strobo had a bunch of laundry to get done. They had quite a backlog it seems. Strobo's cape was FILTHY. You'd think he could keep the one item of clothing that wasn't underpants, gloves or shoes clean but apparently capes get really dirty really quickly. Good to know. I'm not sure Zodac should have washed his cosmic armour though - I'm pretty sure it said, "dry clean only" on the tag.

We all know Skeletor was busy all day posing for DoomKick's Reviews (although Fang Man and Jitsu both had photo shoots and they still had some free time. Maybe it was all the costume changes?) but what did Beastman choose to do while his master was away?

He caught up on his reading.

I hope you enjoyed coming with me on this journey behind-the-scenes of MOTU Day. I hope you have a good one - whatever it is that you do.

What did I do today? 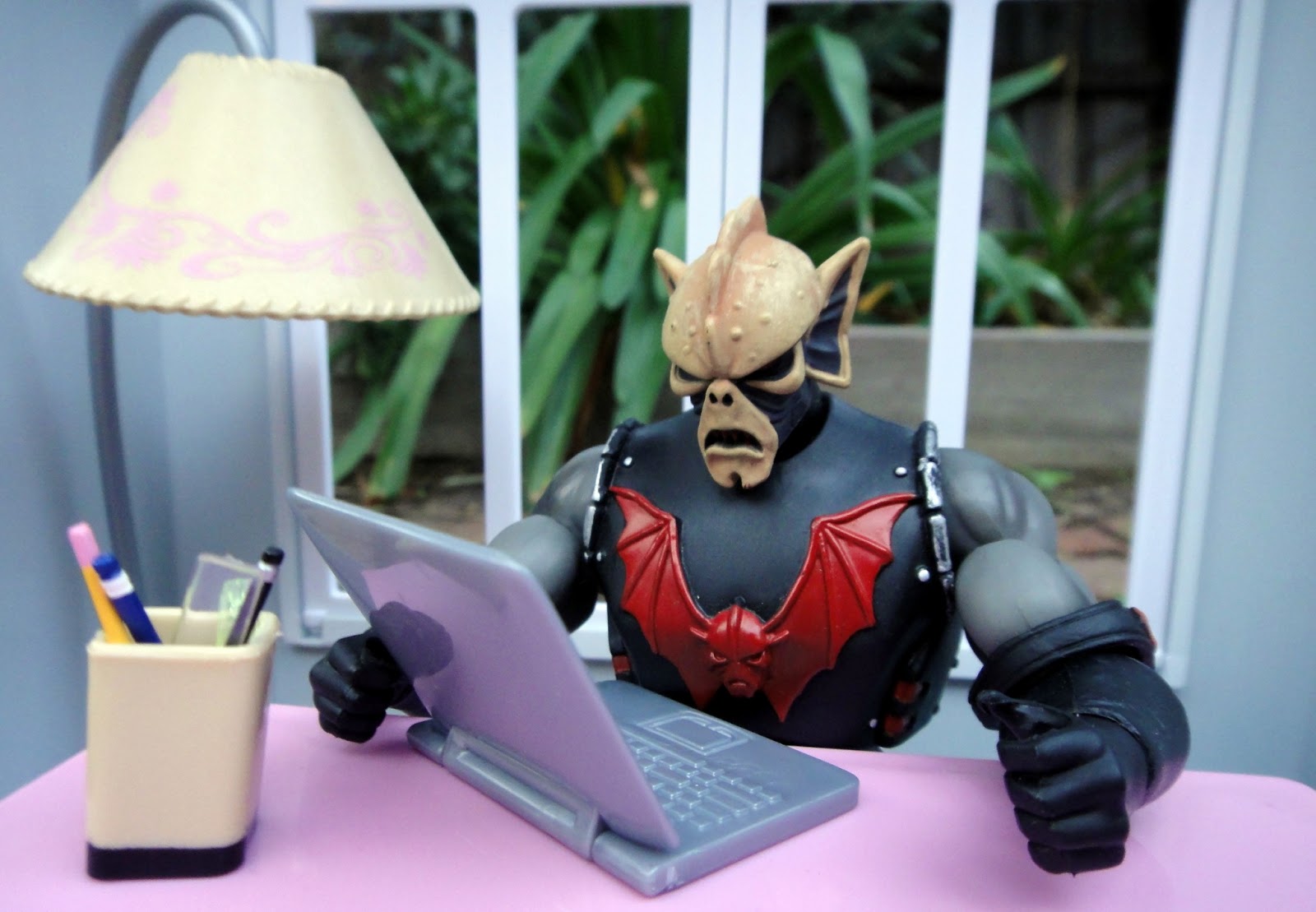 HAPPY MASTERS OF THE UNIVERSE DAY!