HOW HE-MAN RUINED MY LIFE. 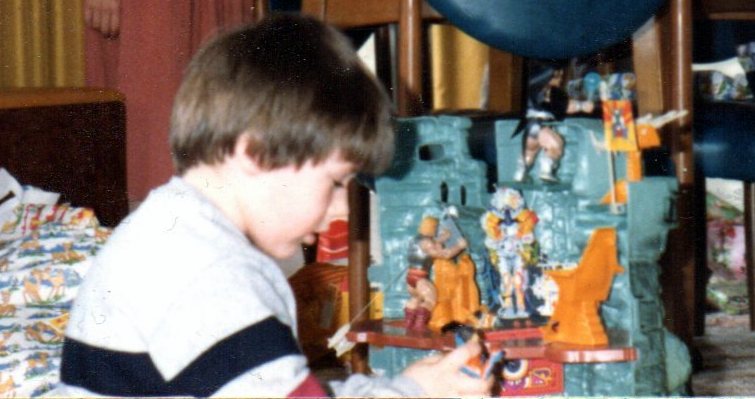 On the 7th day of Hoardsmas* my pal Hoardax showed to me:

A scanned-in photo of the distant past!

Welcome BACK to the Virtual Toy Chest Of Hoardsmas Past.

.............we did a previous entry very similar to the one you're currently reading RIGHT here.

I can't quite imagine exactly what it must've been like to be playing with Castle Grayskull on Christmas Day.

I know I have a photo of a part of this moment but I'm not sure it does it justice.

While I have a vague recollection of posing with that Adam Power figure from POWER LORDS for that photo (again, see last entry) - with Grayskull I can't be sure if I truly realised I was playing with one of the greatest toy play sets of all time.....at the time.

I also can't tell you how much I played with this play set as a Hoardling, but it was A LOT.

It was, bar none, the ultimate present a Masters Of The Universe-obsessed 80s kid could get.


Just looking at this picture, and the set-up of the "inside" of Grayskull in some of its glory fills me full of excited nostalgia.


From the throne that turned and opened up the trap door, to the elevator, the laser turret, the cardboard robot guy, the cardboard computer, the weapons rack and the sticker of the creatures in the 'dungeon' right down to the awesome JAW BRIDGE that could only be opened from the inside or with joined power swords - I remember every detail with absolute love.


A keen Hoard Worlder's eye might also notice that manning the castle are Battle Armor He-man and none other than DEIMOS from Remco's Warlord line of figures (completely backing up one of the themes behind this early Hoard World blog way over HERE) standing on one of Grayskull's towers.

I appear to be holding Zoar.

The Castle Grayskull from my own past has sadly, well and truly, had its day. The last time I ever saw it, was to say goodbye to its weather-beaten carcass, left to rot in an outside shed right before my family moved house a while back.


Seeing my childhood Castle Grayskull and Snake Mountain sitting completely ruined next to each other in that horrible shed and abandoning them that one dark day is practically the cliche of of the collector's regret origin story - ("I used to have blah blah but then THIS happened........") The only difference being that I lost both vintage MOTU play sets way later in life.

For many years post-childhood, I thought I still had Grayskull and Snake Mountain sitting some place safe, waiting for the day I returned.

If you've been following my adventures on Hoard World (both here and on Facey B), it's no secret that I am a vintage toy enthusiast (amongst other things) but I'm also a big fan of the new stuff, particularly if it reminds me of the old.

But while I'm more than open to the existence of wonderful 21st century re-interpretations of properties I grew up loving like Masters Of The Universe, Teenage Mutant Ninja Turtles and even Earthworm Jim, I long ago resigned myself to the cold, hard reality that you can never really go back.

I can surround myself with every piece of Masters Of The Universe merchandise ever released in every era from vintage to 200x to classics but I'm never going to be five years old again.

And no matter how much I still love it all today, nothing compares to having a Castle Grayskull play set and actually playing with it as a kid.


This ad was totally right.

You just had to have all the fun in the universe while you were still a child.

Boy, did they do a number on an entire generation!

I'll come out and say it now, He-man has ruined my life.

More Hoardsmas Miracles are around the corner folks!

Coming soon we'll finish the trilogy with the final part of Hoardsmas: 1980s plus maybe even a Christmas Past/Future Wishlist and hopefully A Very Hoardmas Photo Shoot on the big day itself!

*at this point, it should be noted that we are more than likely counting incorrectly given that the last post was the "12th" day of Christmas and that was six days ago.