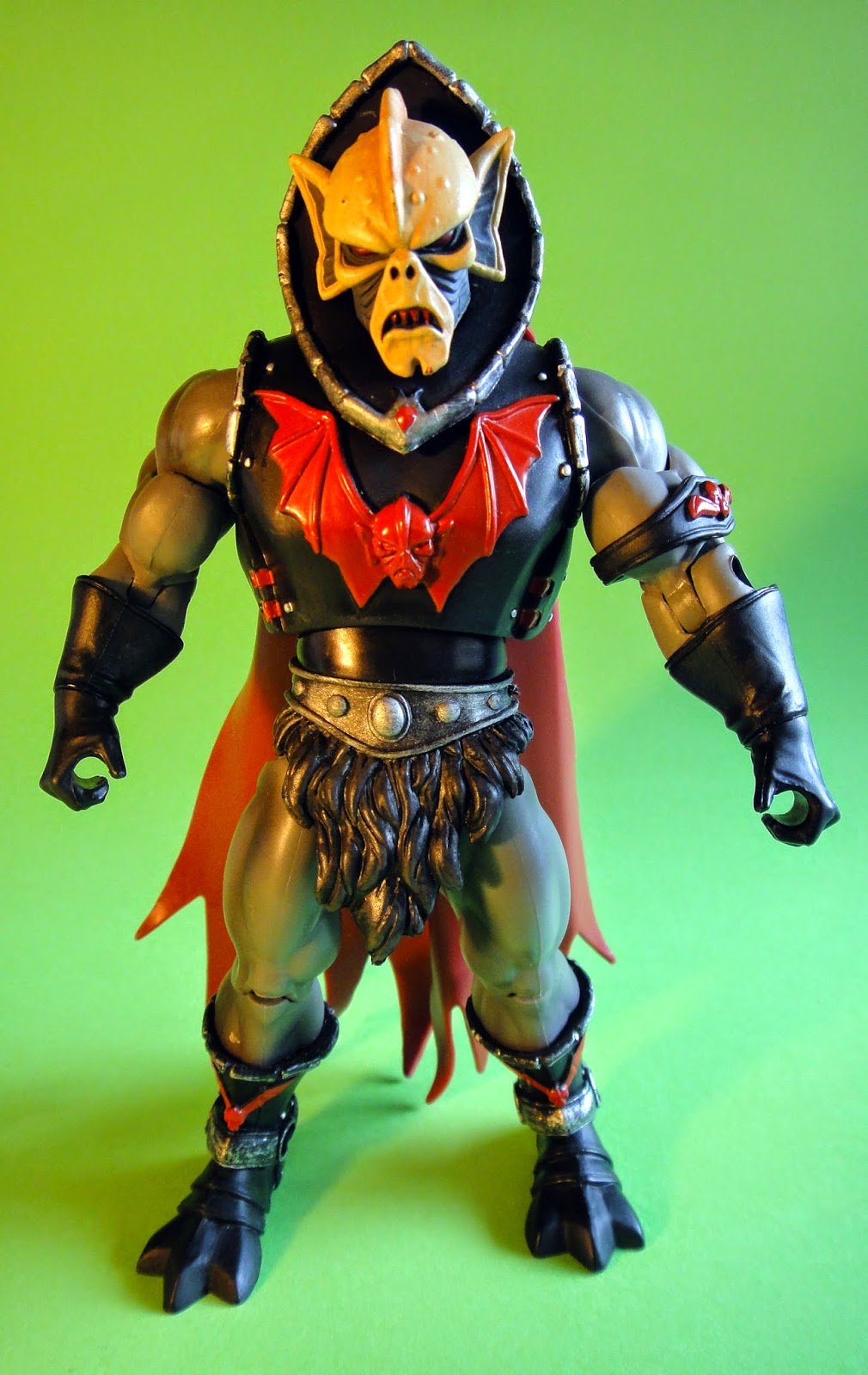 
The action figure of my brother Hordak has been out for a long while now. Initially, he sold out VERY quickly on Sale Day from the Mattycollector website. This isn't something you have to worry about anymore because he was re-issued. He is now one of Mattycollector's "evergreen" figures, which means he is available to buy (at the time of this publication) from their site for the rest of your life and for as long as toy fans shall live, forever and ever. He-men. (Nobody likes the gag where you replace "Amen" with "He-men, alright Hoardax? Nobody but you - Ed.)

Here's a comparison to the original vintage MOTU figure of Hordak (albeit one who's missing their cape) for your viewing pleasure. 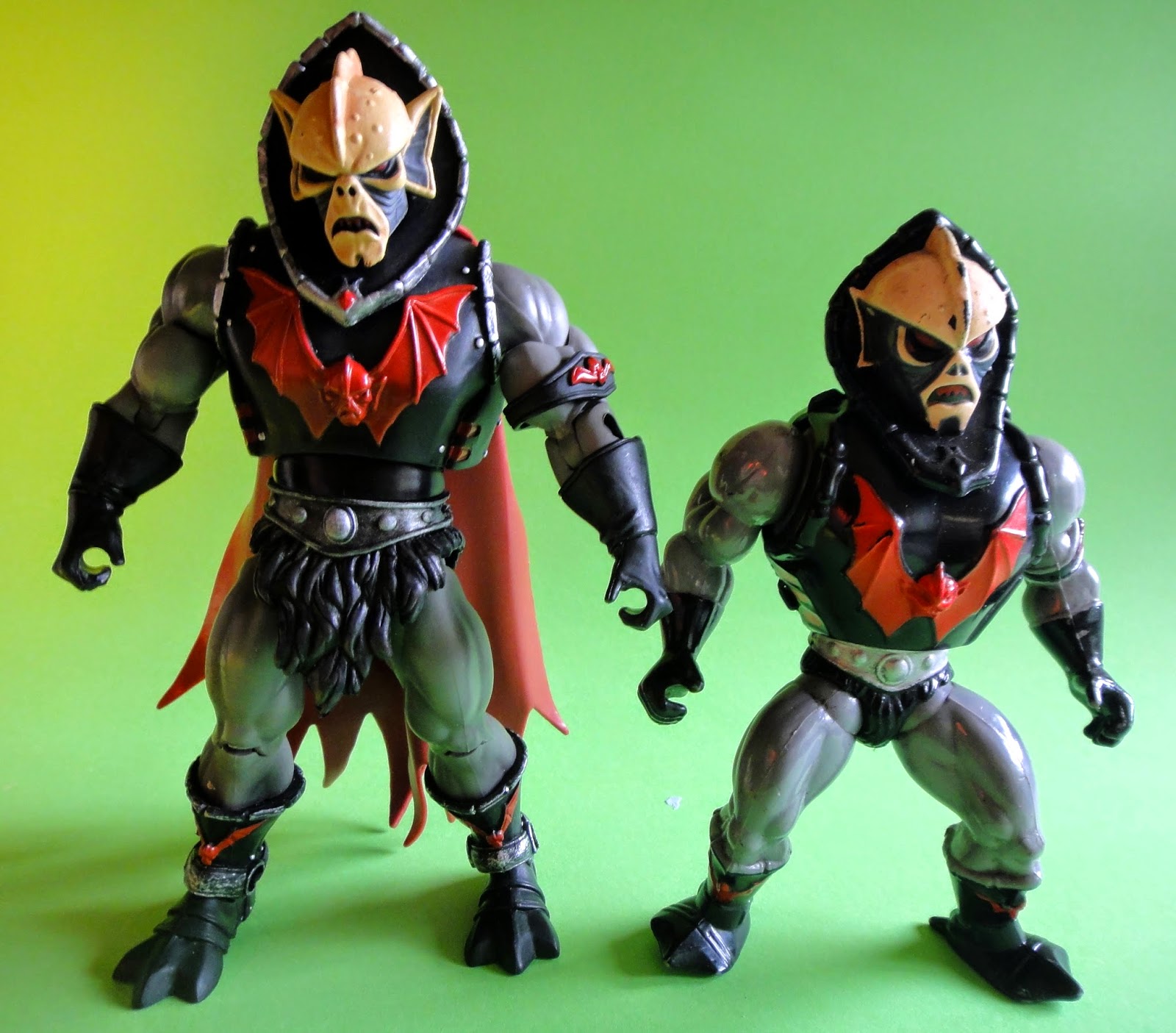 Classics Hordak is a lot taller isn't he, Doomkickers? I have to say, having known Hordak my whole life, this is totally incorrect. The real Hordak is a lot shorter in person. Most evil dictators are diminutive. Hitler. Stalin. Tom Cruise.

For most people, the difference in height between vintage Hordak and Classics Hordak is the same difference between Hordak and themselves. Nobody ever mentions this. They're too frightened. Well, I'm here to blow the whistle and tell the people. This is Hordakgate! This is Hordakleaks! I'm practically a modern day Serpico.

Now let's take a look at his derrière. 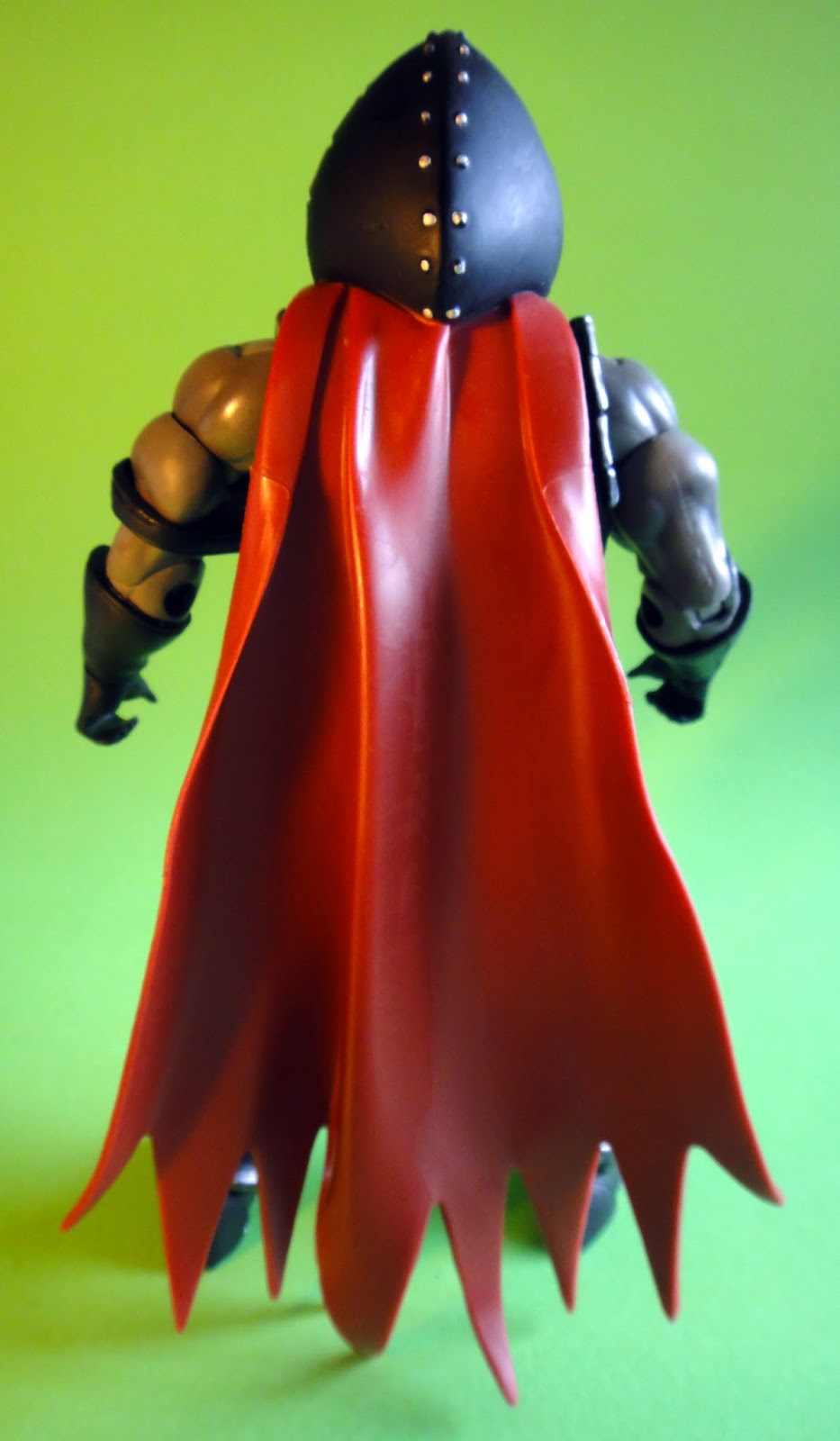 You can't see because his cape's in the way but Hordak needs to cut down on the chunky chews. In short shorts, he's starting to look like a big booty dancer from a rap video. You try telling Hordak that he should get on Weight Watchers for his own health!

For starters, he won't even take my calls these days. He's too busy trying to defeat The Great Rebellion, blaming his henchmen and Horde Troopers for his own dumb mistakes or bonding with Imp.

When they say that Hordak is Skeletor's mentor, I know why. They both went to the same school of poor leadership skills that scapegoats their employees for their own incompetency. 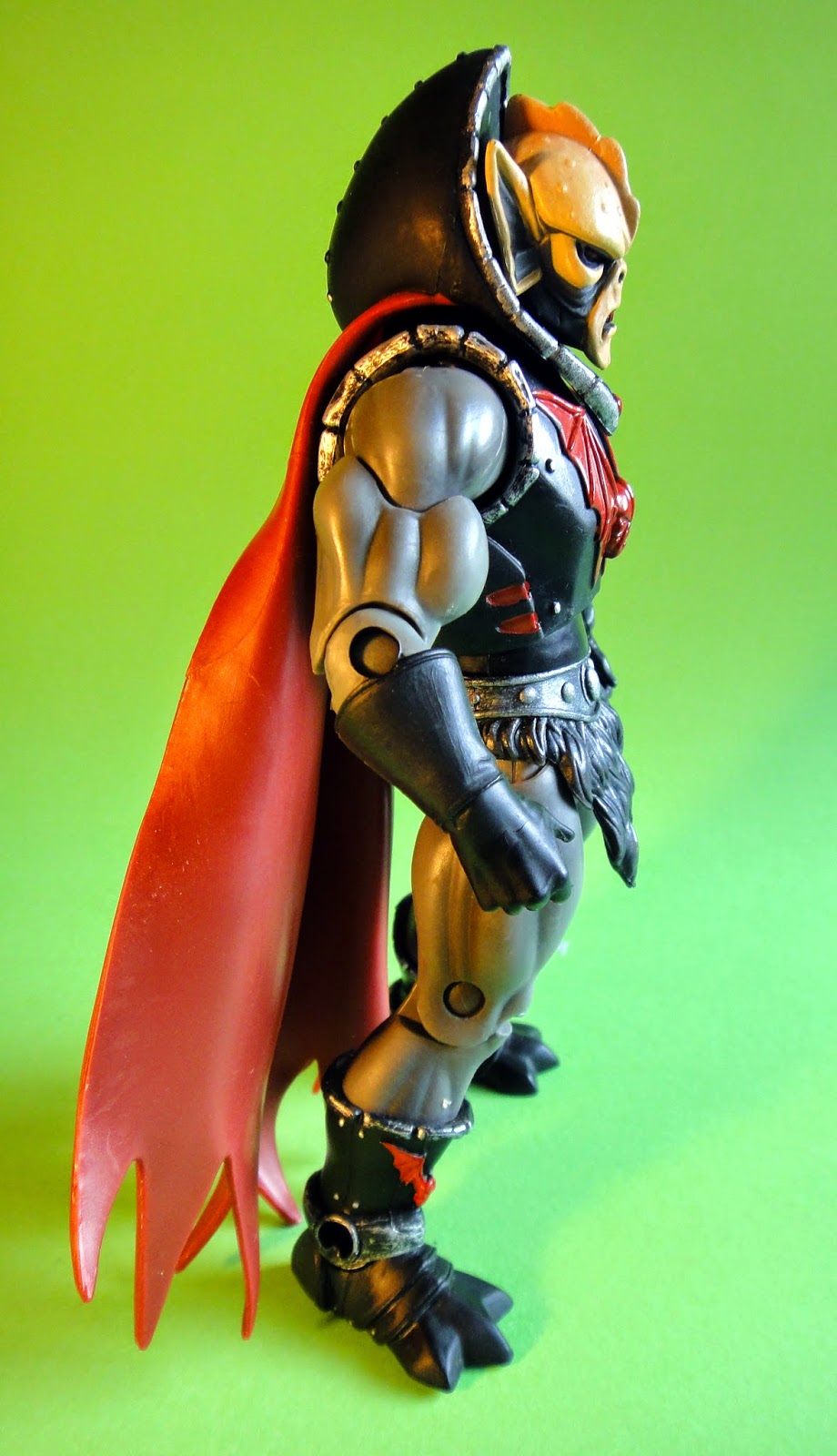 Hordak comes with a decent amount of accessories to make up for his bad attitude.

He has a pretty sweet crossbow just like the vintage Hordak except it's better. 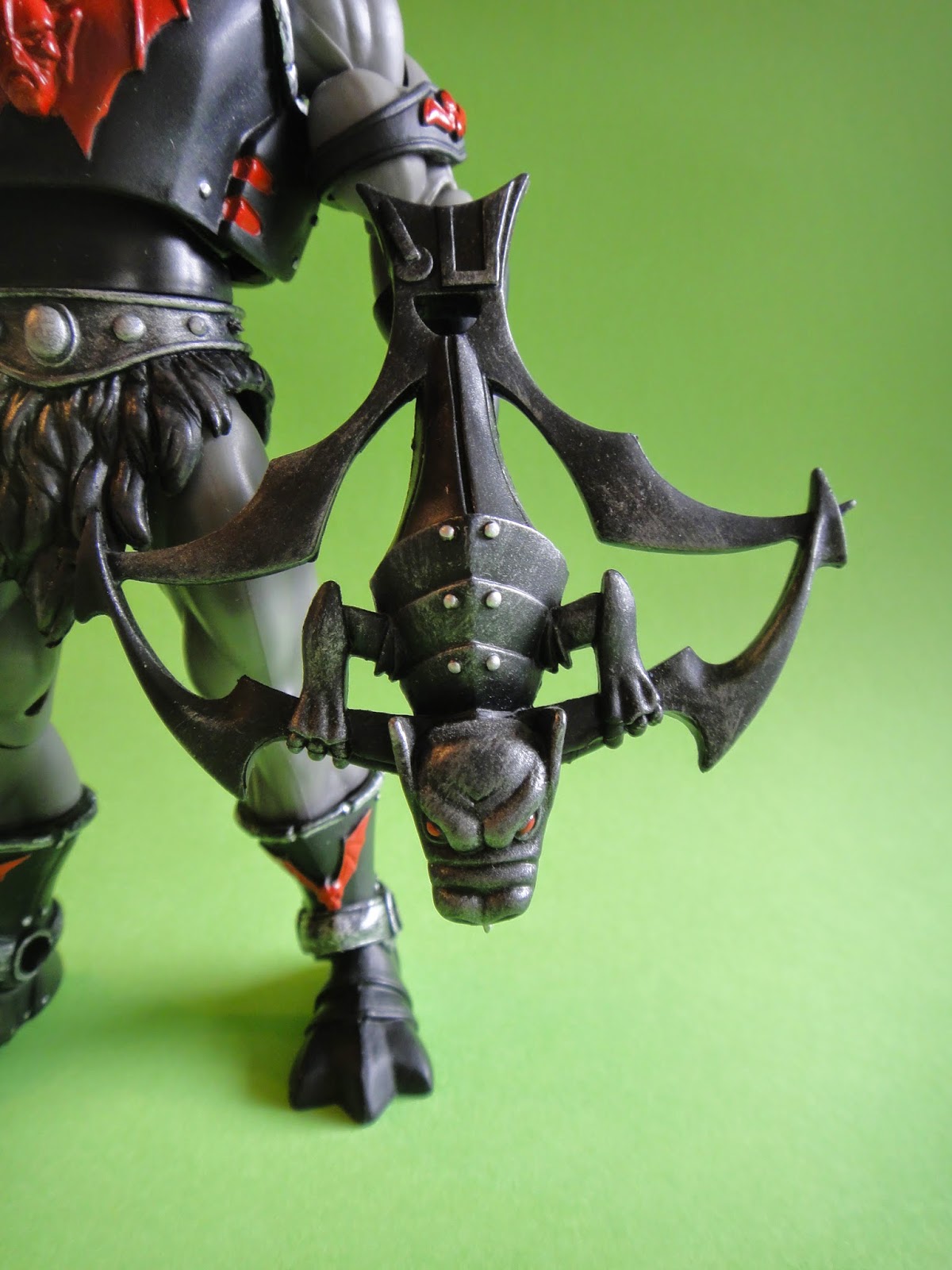 He has a bad-ass staff which comes in very handy helping my Hordak action figure to stand up properly on the shelf. He's seen a lot of action and his right leg is starting to get loose and a bit wobbly.

He also has a pet bat. My vintage Hordak had one of these too but it must've flown away at some point because I couldn't find it to use as a comparison. The new bat is beautifully sculpted and a great modern day upgrade from the flat plastic one that perched on the vintage version. But if you make Hordak hold his staff, his crossbow and perch the bat on his wrist, he starts to look a bit busy.

Which he is. That's why he's such a crank.

If you wanna mess around with Hordak's wardrobe (and I strongly advise that you do), his armour is removable as well. 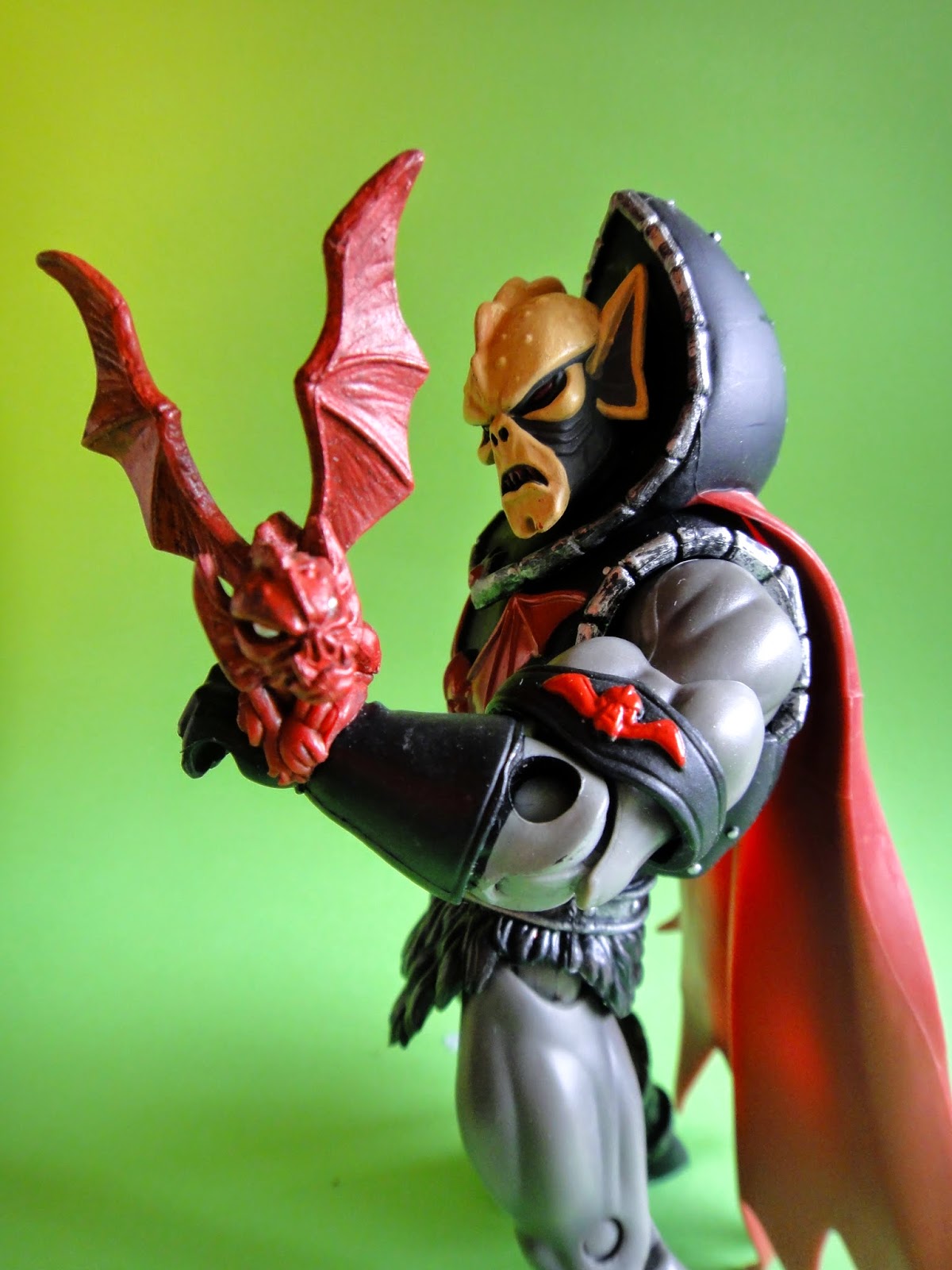 During the photo shoot for this review, Skeletor turned up and was outraged that we weren't looking at him. He challenged Hordak to a Duel To The Unconscious And Slightly Bruised! Which Hordak was too proud to refuse.

Here's where you can see Hordak using some of his many points of articulation and that staff from before. 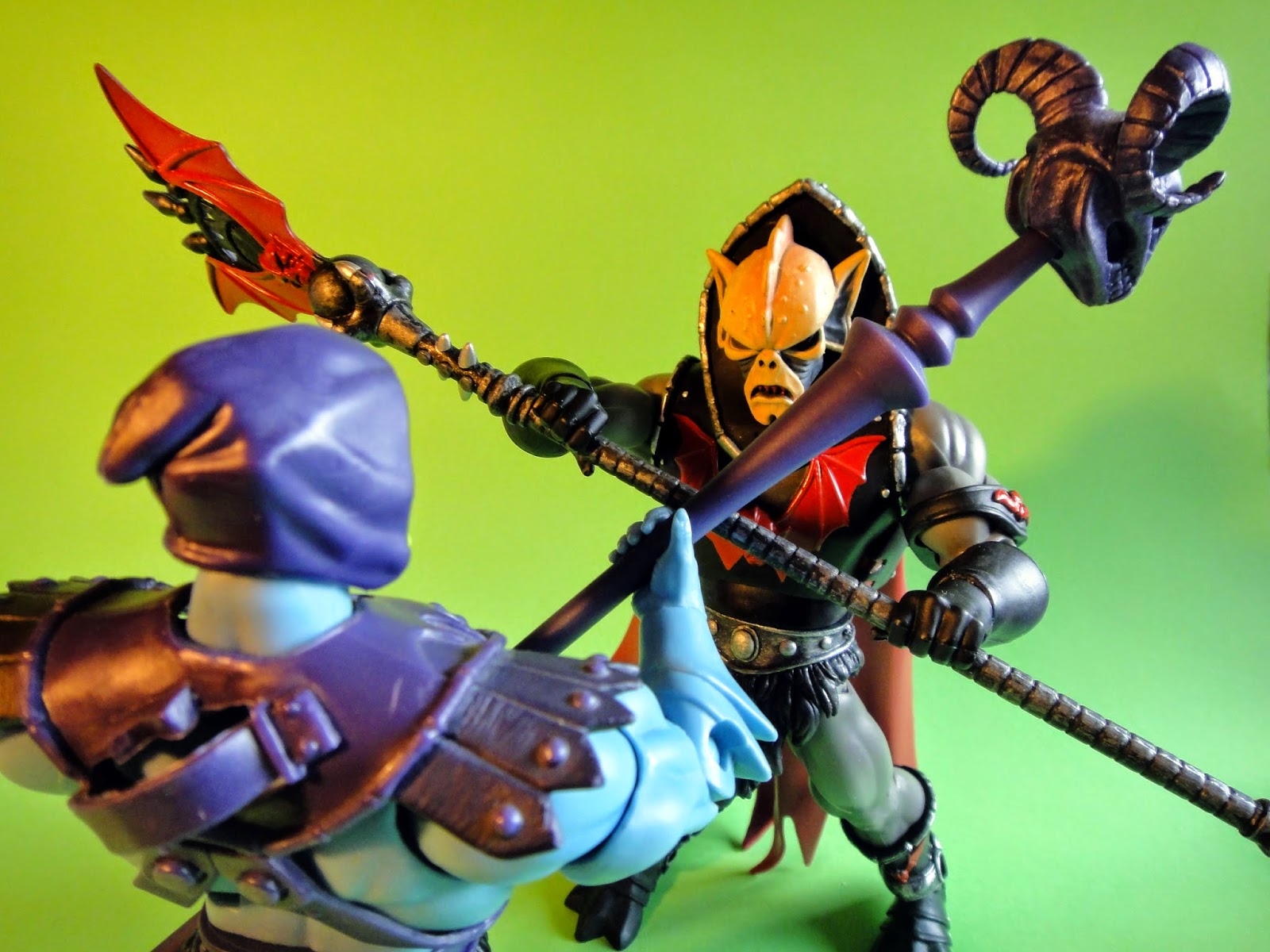 Now, I don't know if you've ever noticed this but a Doom Kick standard...nay, a tradition is that the subject of the review will always win in a fight!

I was not about to mess with that rule. Not to mention Hordak actually beat Skeletor's boney ass to within an inch of his Extradimensional Demon Life. You read correctly. A Demon. From another dimension. I don't believe in Uncle Skelly. I can't believe I'm actually going to type this but, It's just not part of my canon.

But let's not get controversial. To each their own.

Anyway, here's Hordak winning for once in his life. 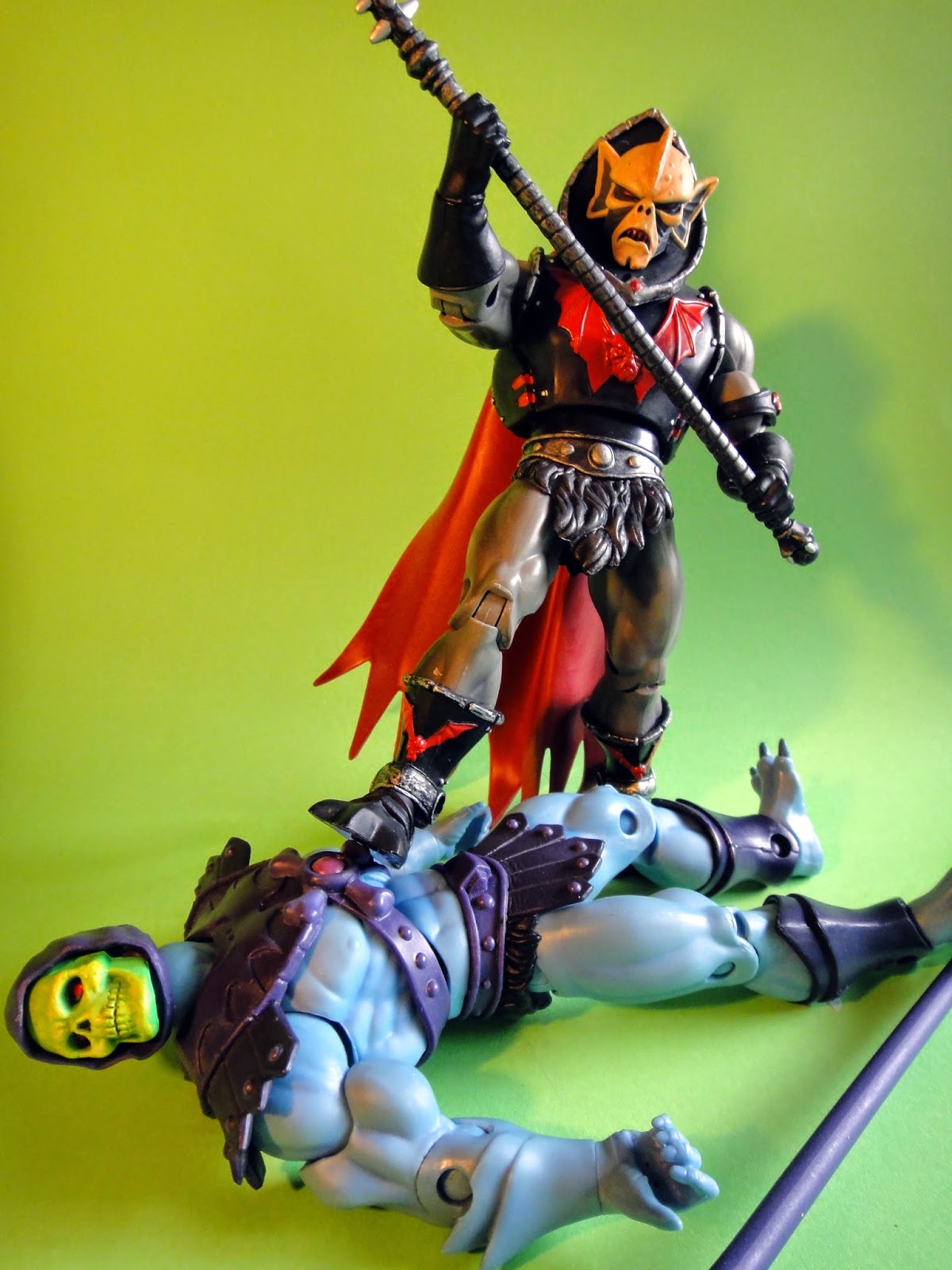 For the sake of all you Doomkickers (and Hoard Worlders that might be reading this too or BOTH) that have yet to own a Classics Hordak action figure, I have to admit that if I set my own beefs aside, I can objectively say it's a very good figure.

I've read other reviews from way back when complaining about various aspects like  his "sloppy" paint ops and the "skin" under his armor being black instead of grey like the original but hey, I can deal. And I'm a bit fussy. Perhaps they got some figures that slipped past Matty's eagle-eyed quality control. Ahem.

Overall, it's definitely a figure that you should own if you're a He-Fan or She-Raver or a Brony that just like great action figures.

If you're not convinced, you should really own him for no other reason than if you get the new Batman Unlimited Dark Knight Returns Figure you can do THIS: 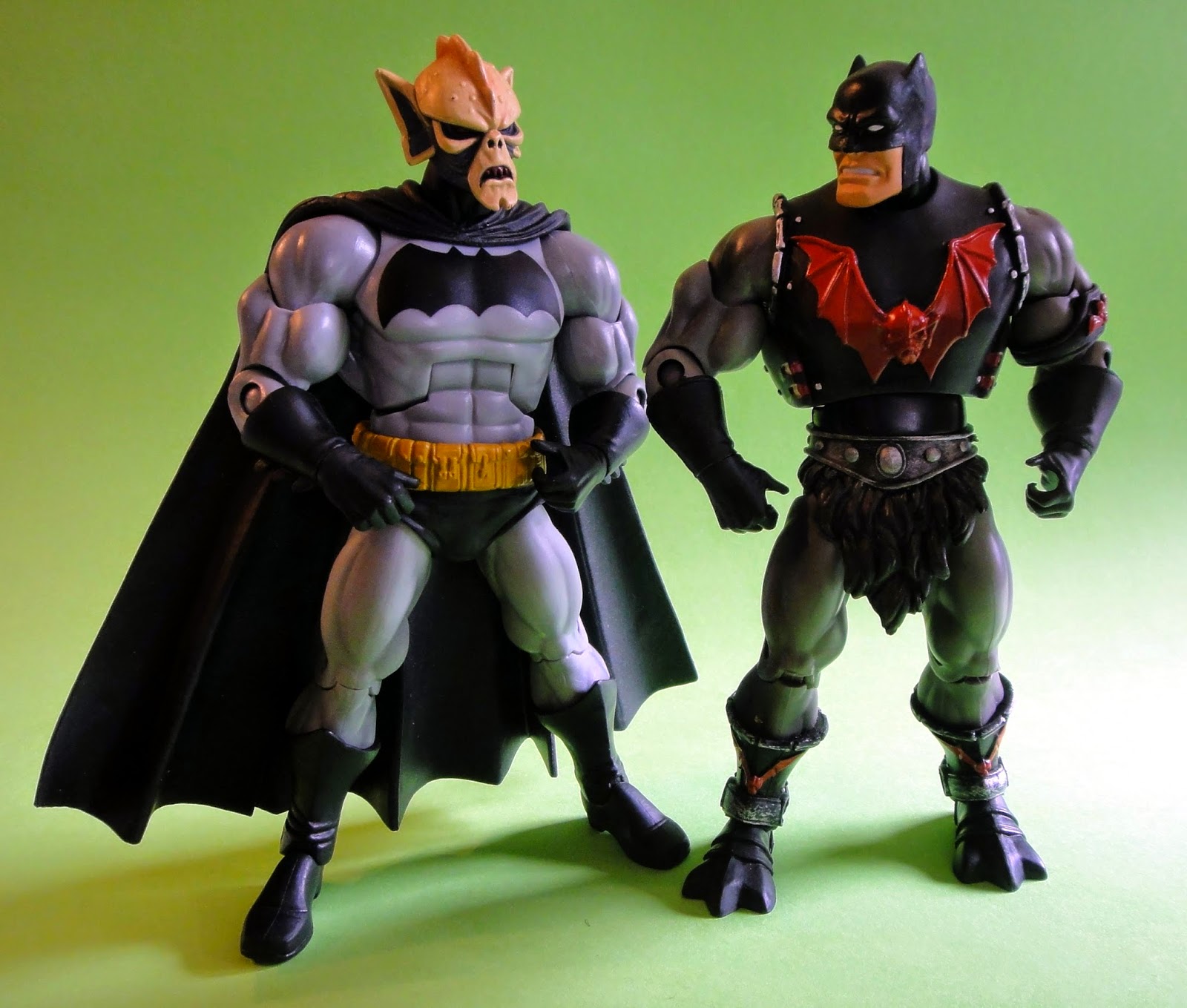 Now this is a body swap comedy I'd like to see!

On a personal (preference) note, I mostly use the Hordak figure without his cape   and cowl. He poses infinitely better without it and I just like him that way.

Thanks to Doom Kick for this opportunity!

Congratulations on a whole year of awesome! Here's to many more! 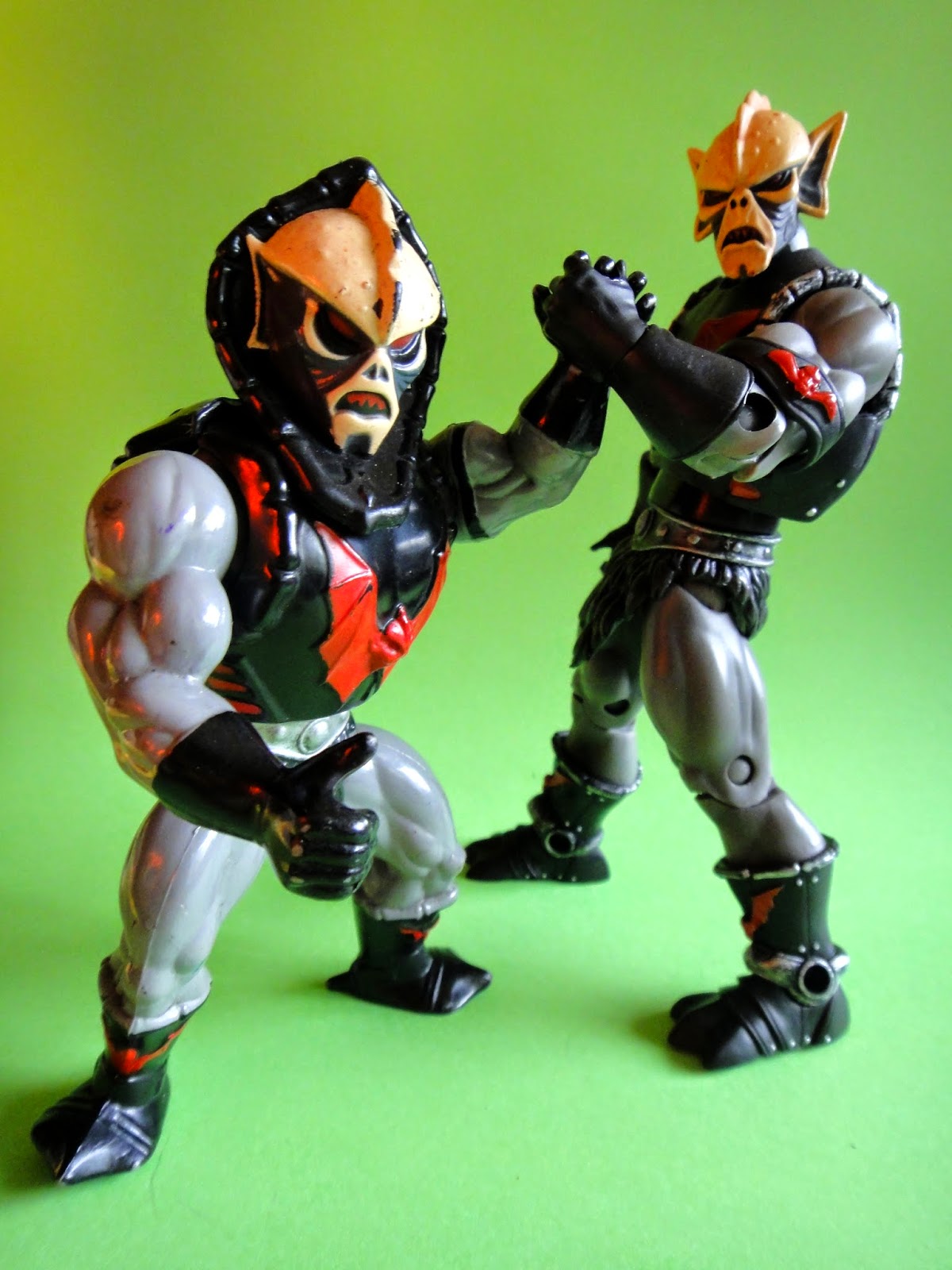