THE SPIRIT OF HORDAK!


Earlier today, a surprise, mystery figure went on sale at Mattycollector.com. It was something completely unexpected and most people were left blissfully unaware.

And then they were a mixture of  shocked and enraged.

I was alerted to all this by fellow Hoard Worlder Dan Maraldo (all the screen grabs you see in this post were originally taken by him except for one - no matter what sites you see it on) at about 4.30AM in the morning Hoard World Time (I'm sure it was NOT that time for a lot of you) and I couldn't believe my own eyes when I saw it.

Was this for real? Yes. Yes it was.

I uploaded this pic that Dan had shown me to the Hoard World Facey B with links to the sale page as fast as my little plastic legs could carry me but about two minutes after I posted it, THIS happened when you clicked on the link.

I swear, for a second I finally understood how Obi Wan felt when he spoke about the destruction of Alderaan.

"I felt a great disturbance in The Force, as if millions of voices suddenly cried out in terror and were suddenly silenced. I fear something terrible has happened."

"I felt a great disturbance on the internet, as if a few thousand He-man fans suddenly cried out in terror and then cried out some more. I fear something ridiculous has happened."

For those who came in late, here's what the Matty Shop Site looked like.


So, if for some reason during that brief 40 minute period of the previously never-announced SPIRIT OF HORDAK actually being on sale, you happened to go past the Matty website, you might have noticed that it looked different.

And so you click on that Horde Logo and you either get the option to buy Spirit Of Hordak (as seen in our first picture) or you get the message "You're too late. Hordak is back in hiding." (as seen in our second picture)

From the reaction that I've seen so far, most people either got that Too Bad So Sad Bye Bye message or nothing at all - once the site reverted to its normal self.

And that was that.


I don't normally talk about current events or things of this nature on the Hoard World Blog but given that I really felt like I was on the frontlines of this whole debacle/viral sales attempt as it was happening and my name is Hoardax - The Power Of He-man Compelled Me.

I've been told that there are already Spirit Of Hordak figures selling for $150 on eBay.

The good news for those of you who missed out and who care about having a translucent red Hordak figure with a vintage style white crossbow is that apparently Hordak's spirit is going to come back on sale at random times for the next little while. If you want to spend the next few days of your life refreshing the Mattycollector page.

I have to say that Mattel have really done a number on the fans with this one. They've reduced thousands of grown adults to the equivalent of a love struck 1950s teenager staring at the phone, waiting for it to ring.

On one hand, I'm titillated by it. A Secret Hordak Figure! Oooo-er.

On the other hand, I feel for completists and subscribers who have yet another figure they can't guarantee they are going to get even though they've played ball with this whole He-man shenanigan by going through the proper channels from day one.


What do the people of Hoard World think about all this?

Are you mad as hell and you're not going to take it anymore?
or
Do you want more one-colored, translucent plastic spirit versions of figures you already own to randomly turn up on sale when you least expect it?

Something actually important to a lot of people did also happen this week:
The death of a genius who inspired millions. 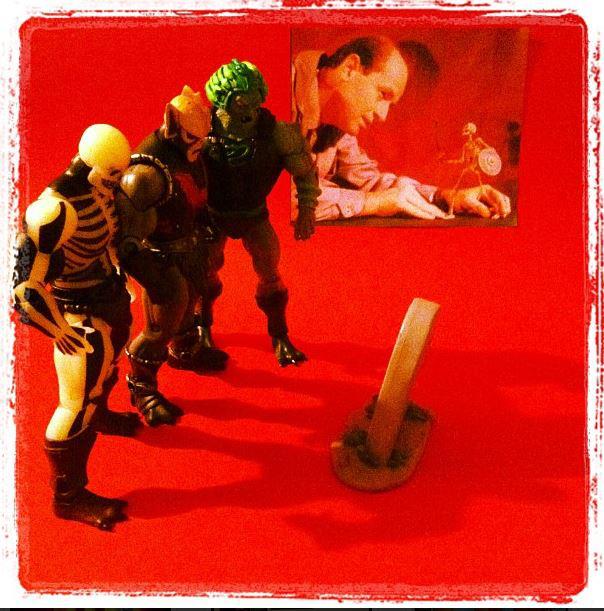