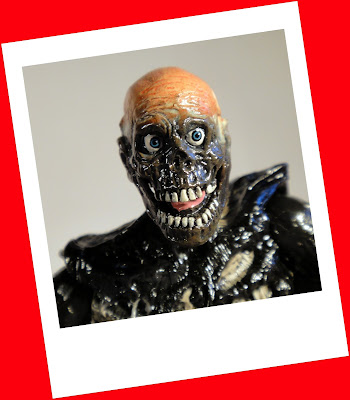 The review included in this blog entry was originally published way back in July 2013 on ThEpicReview.com for their Resident Evil Zombie Celebration Week. It was written specifically for ThEpic Review site so may contain specific references to the site etc. Due to the age of the article, some of the information contained within may have dated somewhat; for example the film 'Warm Bodies' is not recent. You can check out the originally published version on ThEpic Review's site here.


I remember the NIGHT very clearly. I'll never forget it. It was about a month ago. It was when ThEpic Review requested guest reviews for their Resident Evil Themed ZOMBIE WEEK Extravaganza. That was the exact moment that it DAWNed on me that I didn't have any decent Resident Evil figures, like, at all. This made me Sad Face. But then I remembered that I do have some pretty great Zombie figures regardless, and it was about time they saw the light of DAY.

I'd like to think that if you're reading this toy review that you've already seen the major motion picture RETURN OF THE LIVING DEAD. However, if you missed out on the year 1985, never owned a VCR/DVD/Bluray player and haven't been near a television or cinema screen since, you can watch the entire film right NOW. I think we can both agree that you really have no excuse to have not seen the film at this point.

Having said all that, I'm so generous that I'm still going to make it even easier for you (at the expense of everybody else in the world that is reading this, has seen ROTLD, and just wants me to get on with this Tarman Review) if you don't have 87 minutes to spare, and you can just watch this two minute Best Of Tarman clip. Crappier versions of Tarman also appear in Return Of The Living Dead Part II and Return Of The Living Dead: Rave To The Grave. 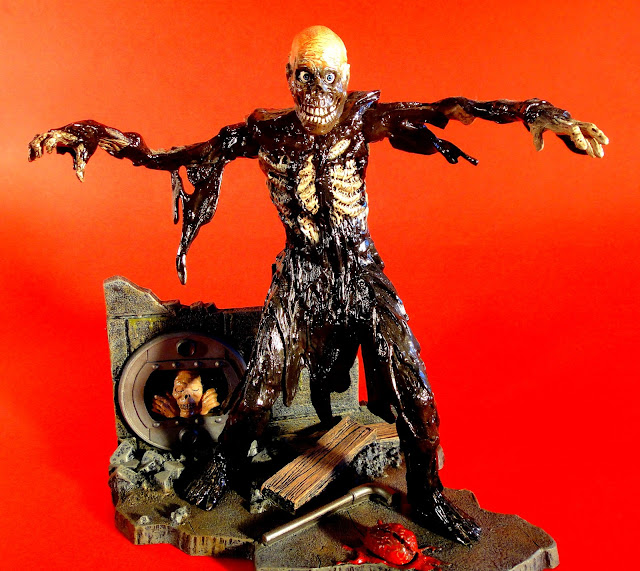 Tarman was released by Amok Time Toys in early 2012. I had no idea it was coming out at all and was totally surprised when I saw it on the shelf. I bought Tarman immediately. It seems to have been a wise decision since he is getting harder to find these days. Forget about rarity or value though, it was a wise decision because I LOVE RETURN OF THE LIVING DEAD.

And it's a TARMAN ACTION FIGURE. Are you serious? This is the best thing ever.

Tarman is easily one of the most iconic zombies ever committed to celluloid. He's also primarily to blame for the general public's common (and often incorrect) assumption that all zombies eat brains. Tarman made eating brains famous long before Hannibal Lector forcefed Ray Liotta his own brain. Something that, I think you'll find, poor Ray Ray has never quite recovered from.

Before Return Of The Living Dead and Tarman's "Braaaiiiiins" catchphrase, nobody had linked Zombies to brain eating, although I'm sure they must've at some point on film previously....those Zombies sure do get hungry all the time. They'll eat the giblets and everything. Yes, even the giblets. 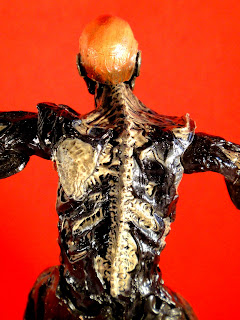 Given the cult popularity of Tarman it almost seems odd that he hasn't had a figure until recently. I mean, NECA released the Hare-Krishna Zombie from Dawn Of The Dead for Crom's Sake! (There's nothing wrong with that - in fact, that's pretty awesome but c'mon!) It couldn't have been a licensing issue that's prevented the release of a Tarman figure for so long because Amok Time released him. This is nothing against Amok Time at all (they've been an extremely successful purveyor of toys and collectibles since 1992) but they're a pretty small time toy manufacturing operation in comparison to NECA or even Mcfarlane in its heyday.

So how good is Amok Time's Tarman Action figure?

Well, he's a bit better than good, he's GREAT, but he's not quite Epic. 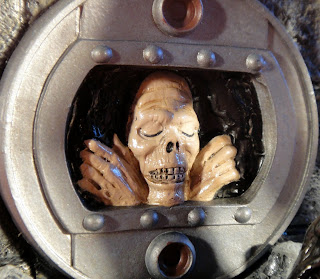 Tarman comes with a relatively detailed diorama to stand on - which is inspired. One of his brethren is still packed away in a toxic vat right behind him. It's a nice touch. Tarman also comes with a brain that has had a bite taken out of it. You can choose to leave it in its place in the diorama or with some fiddling you can get Tarman to hold it.

Tarman's jaw has some capacity to open and shut which is kinda cool. This figure has VERY limited articulation however. There's not a lot of poses you can get him into at all. He can move his arms up and down and that's pretty much it. The figure itself is so fantastic overall that his limited articulation is by no means a deal breaker though. Think of him as more of a detailed, film-accurate plastic statue with arms that move.

Like I said earlier, this plastic incarnation of Tarman has been doing the rounds for a while now, and I'm not sure how great his distribution was to begin with, so if you want to nab yourself a Tarman for your Zombie display or simply because you're a massive Return Of The Living Dead fan and this is a must, you should act sooner rather than later. I'm assuming he's long sold out at most bricks and mortar pop culture/collectible stores as well as many of the usual online retailers. Your last, best hope for a piece might be over on Michael eBay.

For ThEpic Review's Resident Evil Week, I am also doing Zombieriffic Reviews of the Marvel Select Zombie Captain America and one of the most bizarre Zombie Superman figures I've ever come across. Keep your eye stalks popped out for those!