Regular readers of the Hoard World Facey B may remember a new segment instituted a few weeks ago entitled ASK HOARDAX.

For those who came in late, this was a new forum where you could ask ME anything you like about anything you like! Whether it be hoarding related, cooking tips or relationship advice - I'm ready to believe you!*

This was originally supposed to be a weekly occurrence on Facey B, but during early experiments I decided that, if anything, it should instead exist as ongoing semi-regular rounds, similar in format (if not in content) to something like ASK MATTY.

I open up the floor, you guys submit the questions and  then everything is collated into a lovely, more in-depth blog post right here on Hoard World for all to see!

What is your favourite collectable that you own? And what is a toy piece you would love to have?

This is a tough question. I have so many favourites that I don't know where to start and I absolutely can't narrow it down to just one single piece. There's just no way. If there were ever a fire here on Hoard World, I would be better off only grabbing a photo album, my laptop and my wallet, and running out the door. I would burn to death before I could decide on what to grab first! (Also, I can't find anything half the time because so much of it is boxed up.)

Unfortunately, I still can't find my Christopher Walken Kidrobot Doll that was gifted to me many years ago but, for the purposes of this answer, I did find two things that I absolutely love that I could put my hands on easily.


I was obsessed with Skeletor as a child-like Hoardax and had no shortage of fun times playing with his battle damage armour over and over again. To be honest, I'm surprised it still works. He is my favourite version of Skeletor. However, the second I saw the live action major motion picture of Masters Of The Universe, I decided that Skeletor must always have a cape. And for some reason, I never took it off ever again. I had often only used Scareglow without his cape (because I liked him better that way) but was also in the extremely fortunate position of having a second Scareglow, so it didn't matter either way. Ok, so the second Scareglow figure actually belonged to my younger brother. He had to have his own one because he would destroy everything he touched, and I'd had enough by that stage, but that's irrelevant. We all know what I think about him by now. We're not pals anymore. 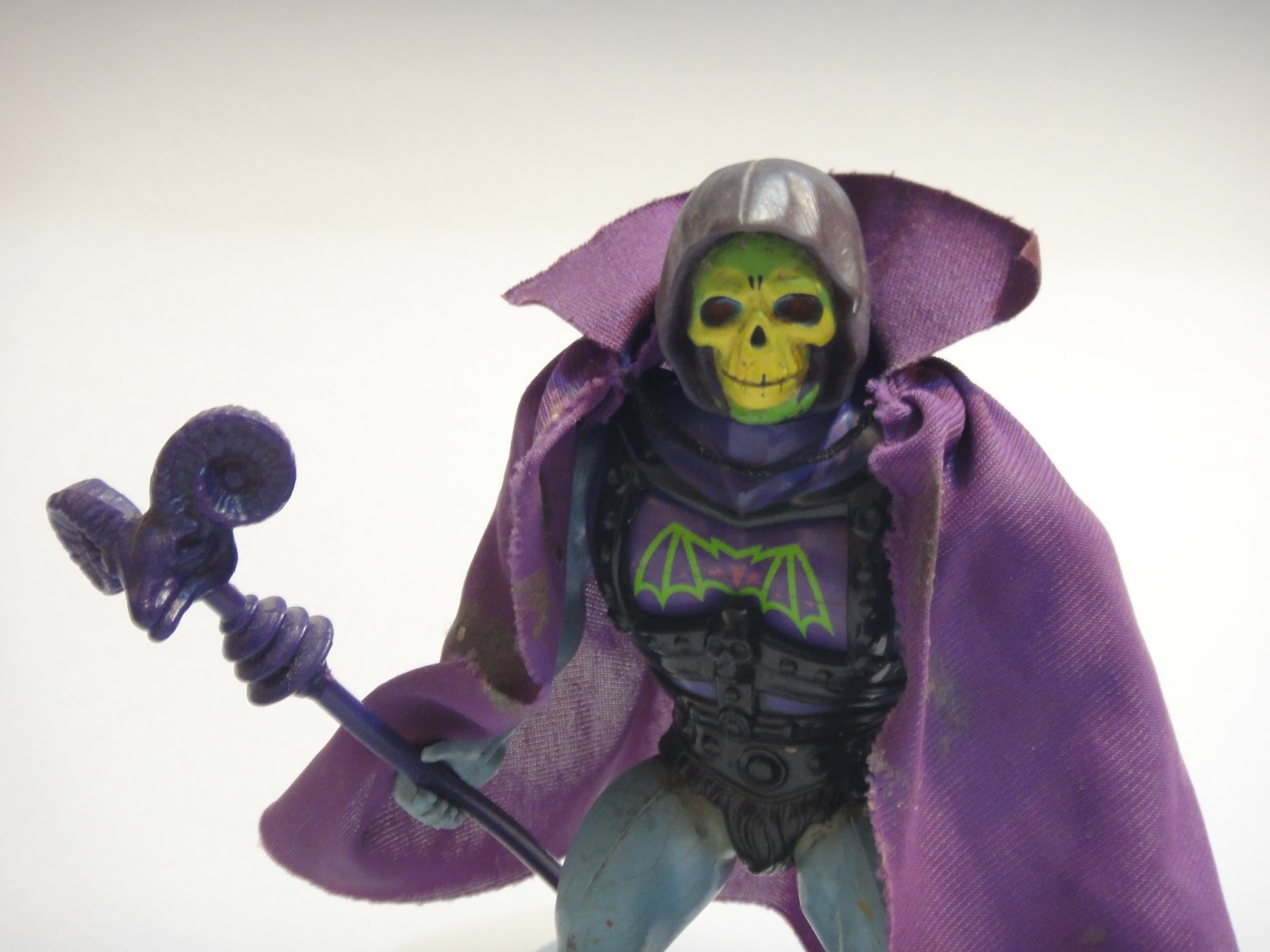 Now, when I say that I never removed Scareglow's cape from BA Skeletor ever again, I literally mean EVER again. That cape stayed on Skeletor (along with the blu-tak marks that I used to keep the cape down over his arms from time to time - because that's AWESOME) for the following 25 years. So much so, that you can kinda tell by the way it sits on him that Scareglow doesn't really want that cape back anymore anyway. I bet it stinks to high heaven. The dry cleaning bill alone would bankrupt Scareglow. Skeletor really should buy him a fresh one.

My movie-inspired, caped version of Skeletor was also one of the only figures I kept out on display always - long after I stopped playing with my toys....officially. He was kept separately from the other He-men. It's a lonely life being a favourite.

However, over the last few years, he has been boxed up along with everything else, and only recently when I was unpacking stuff did I find him again - completely separated from his He-manic brothers and sisters and still wearing that damn cape. I had forgotten about all of this and it made me happy to see him again. 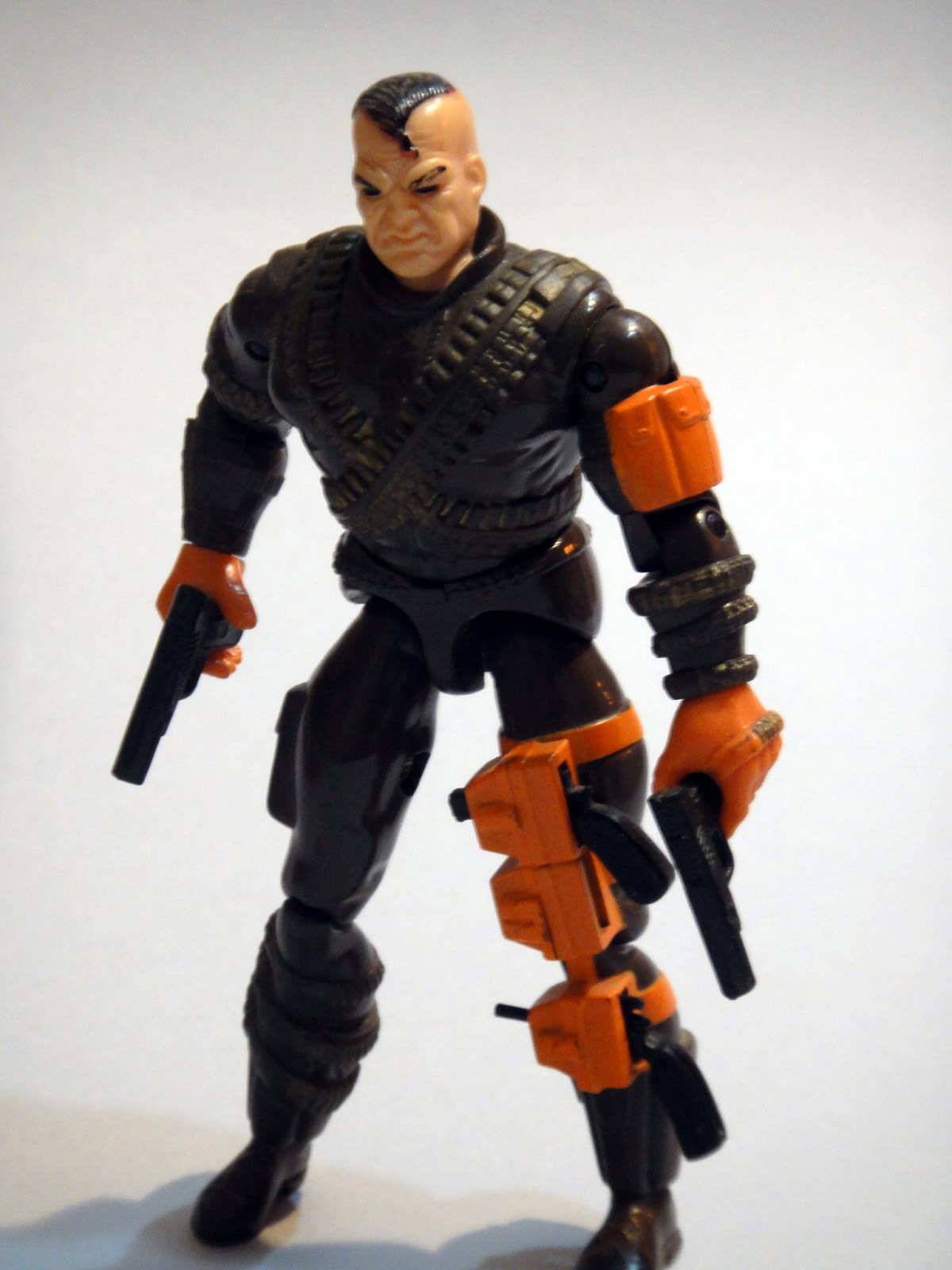 Why my Cops 'n' Crooks figure of Bullit is a personal favourite is a whole 'nother story.

And it ain't pretty.

The Hasbro toy line behind the animated series C.O.P.S. (which IMHO** has one of the greatest animated opening credits and theme music of the late 80s) was fantastic. All of the figures came with weapons that used LIVE CAPS and the figures themselves had the best articulation in that scale that I'd ever seen as a youngster. They were like big G.I. Joes and many of the character designs were super cool to a kid in 1988.

Aside from Bullit, (was he named after the Steve Mcqueen film Bullitt? We may never know) my two favorite characters in the line were Bullet-Proof and Buttons McBoomBoom. (Are we starting to see a theme here?) I'm certain that somewhere between Inspector Gadget and Bullet-Proof my obsession with figures wearing trench coats began. He also had a nice removable hat and a suitcase that you could hand-cuff to him! Buttons McBoomBoom had a guitar case to carry weapons, a nice removable hat and let's not forget, GUNS THAT POPPED OUT OF HIS CHEST.

He was like a long lost relative of Rio Blast.

I have do doubt that I'm not alone on that love and these two characters in particular are fan favourites - you only have to GOOGLE either of them to work that out.

Now that you know all of this about my love of these guys, you need to know this next part.

I never had any C.O.P.S. figures bought for me as a child-like Hoardax.

I would ogle them in every toy store and fantasize about the day that I would have some, but it never happened. No parent or relative or sibling ever bought me a C.O.P.S. action figure. Now before you completely break down and start weeping violently over the injustice of that, we should pay close attention to my phrasing: Bought For Me.

There was one C.O.P.S. figure that was purchased by somebody that I knew. The transaction happened right in front of me. My mum bought our good pal Bullit here as a birthday present for another kid who's party I was going to.

I couldn't believe it! These figures were the best thing ever to me for all of about 19 seconds! I didn't have any at all and she was going to give one to my friend for a birthday present?

You must know that the previous few sentences and paragraphs (the sense of entitlement, the epitome of a first world problems scenario and the idea that any of what I'm describing is even worth re-telling in a public forum) almost makes me sick to my stomach. I am acutely aware of all of this. Yet, I will soldier on.

In the weeks leading up to my friend's birthday I whined. I whinged. I wailed. I would do whatever it would take to get this Bullit figure. I would have him. He would be mine.

I suggested that we get my friend something else. I couldn't stand the concept that somebody I knew was getting something that I didn't have!

This makes me sound like an awful spoilt brat - I really wasn't. But, I also wasn't raised right.

That is a fact. (Let's not even get into the ethics of a child playing with action figures that had so many guns)

And let's face it, those 80s Toys manufacturers had the parents of an entire generation by the proverbial cajones. Any kid that was allowed to be exposed to the sorts of brainwashing techniques these toy ads inflicted was going to have issues. Issues, I think you can imagine, have absolutely continued to this day for many, or we all might've moved on by now. And you'd be reading a Food Blog or something - instead of this.

It didn't help matters that prior to the coveting of Bullit, I had seen an entire set of massively discounted GRUNT The Wrestling Movie figures go to another friend for a previous birthday party. I have yet to see one of these figures again in person or anywhere on the internet so far in my lifetime. I stand by my coveting of those to this very day.

The difference was, I went to that birthday party. I watched my friend Andy open those GRUNT figures right in front of my stupid face. Never again.


I was made an offer. Maybe it was bad parenting. But a negotiation had to be made because I was obviously being a real prick about it and it was driving my family up the wall.

They said, "You can have this toy but that means you don't get to go to your friend's birthday party."

I called their bluff. Much to their surprise, I accepted those terms and conditions and opened Bullit immediately.

Forget that kid's birthday party! And you know what? Where is my friend now? Huh?

But I know where Bullit is.

You can't begin to imagine the extra fun I had with Bullit despite never getting any other figures in the line. It was Spite Enjoyment of some description. It was horrible. But man, was he a great figure!!

I used him as a substitute for a real Punisher figure as well as so many other things. He's great. And he's still one of my favourites.

But hey, victimless crime! My friend never knew that any of that happened! Hoardax was just "sick" and couldn't make it to the party. Oh noes!

Oh well. I hope he's not reading this. Pffffft. How would he know if it was even him or not? I'm not worried.

In answer to the second part of your question Mark W, The toy piece that I would love to own doesn't exist. I want a 6" highly articulated Christopher Walken action figure with perfect likenesses and interchangeable heads so you can have versions of him with different looks and eras: Old. Young. Middle-aged. Blonde Hair. Black Hair. Brown Hair. With a moustache. Without a moustache.

That would be my favourite figure of all time if that were to ever happen.***


Sadly, we've run out of time for ASK HOARDAX today but stay tuned for ROUND 2 when Hoardax will answer even more of your questions in varying degrees of depth! (Probably not as long as this one though - Hoardax went a bit overboard with this one)

Any future questions for Hoardax can be emailed to hoardworld@gmail.com or asked on Facey B whenever the next round is announced.


*You know....like The Ghostbusters. Yeah, I know it doesn't make any sense.

***If I had to choose something that actually exists however, I wouldn't mind the 2004 Thundarr The Barbarian action figures of Thundarr, Ook-la The Mok and Princess Ariel from Toynami.